Yesterday, we left Las Vegas for Flagstaff. The ride was somewhere in the area of four or five hours, and I really enjoyed the ride with Kee, Luchs, and Jones. We left really early in the morning, so I slept some, read some, and we spent some time getting acquainted.

We stayed at the Radisson, and had orientation last night. We received the blue and white bags for our stuff, and Mary and I spent some time packing, and went to bed fairly early. My bag is SO heavy! I don't think I'll need all this stuff, but I can't seem to bring myself to leave it behind! I was up early this morning, and headed down to breakfast for a nice huevos rancheros (my favorite!). I sat with Sherilyn and Tom, and they gave me a coupon (w00t!) for 20% off my breakfast. 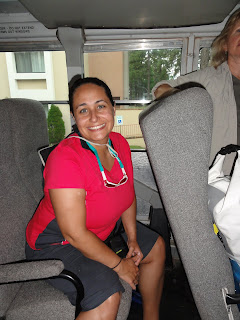 I look pretty perky for so early in the morning!

At 6:45am sharp, we began our journey to Lee's Ferry, where we picked up the boats, and hit the water. Our guide is Dave, the Swamper is Lauren (Swampy!), and the Assistant is Meghan. 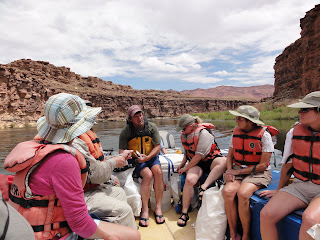 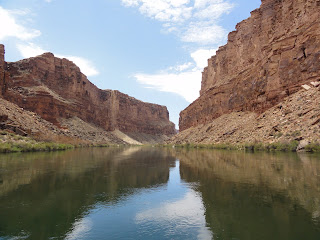 The AZRA team got us on the water relatively quickly after a short orientation, and the water was calm where we pushed off. After a little while, we hit some rapids, and held on like our lives depended on it...well, at least I did. And WOW! was the water cold! I think that this time of year, the temperature is between 45 and 55F. When the air temperature is 100F, the water feels even colder.

Just after Badger Rapids, we stopped for lunch with grilled chicken Ceasar salad wraps, dried mango, and GORP. This stop was pretty long, so many of us took the opportunity to take some pictures. Here are a few of mine from this stop: 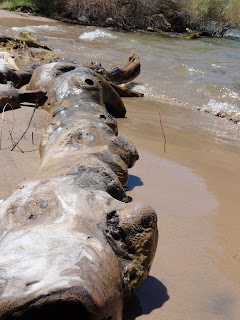 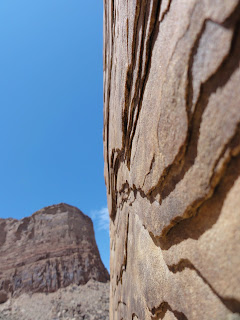 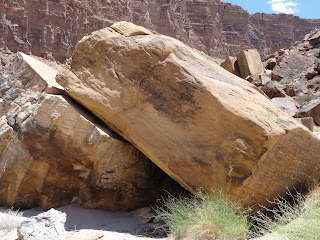