I've been hiding in my apartment from the summer heat but last weekend finally hauled myself out to explore a couple of the mosques I haven't yet visited. My friends E&M spent their time here well, saw more than I think I've seen! and by doing so, somewhat shamed me into braving the heat and going out. What's the point of living here otherwise?

My first stop was Yeni Cami, literally, New Mosque. Yeni Cami dominates the waterfront at Eminönü and was built between 1597 and 1663. It's a beautiful mosque. Narrower than the Sultan Ahmet Mosque (the Blue Mosque) but equally dizzying in how high above the domes soar. Mellowed by the electric lights and curtained doorways, when I first entered I had the impression of a dark, warm interior. It wasn't until my eyes adjusted to the light (in all fairness I was somewhat blinded still by the sun from outside) that I was able to appreciate the colors properly. The turquoise and blue tiles are offset by deeper almost purple and maroons lending a layered feeling to the colors of the interior. 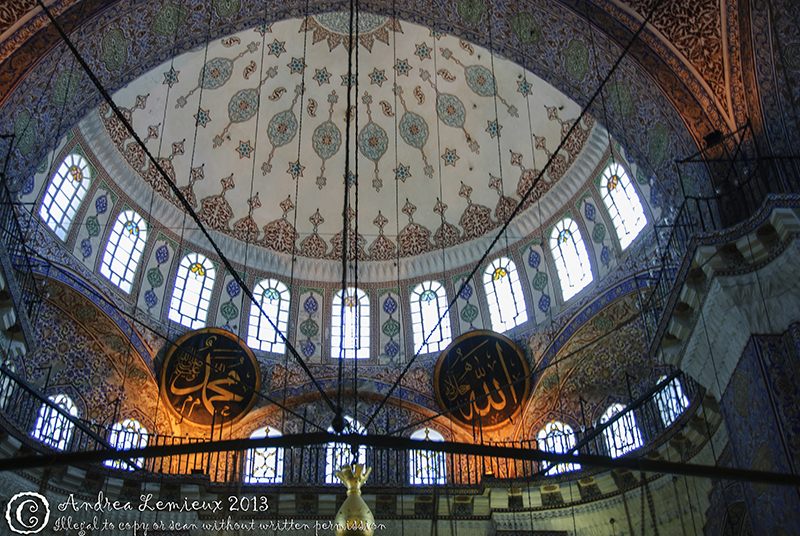 I'm afraid the stained glass windows did not show up well in my pictures which is very unfortunate. They not only amplify the tiles covering the walls and domes but color the light in such as way as to subtly demand a calm that seemed to envelope everyone there.

As calm and beautiful as it was in the mosque, I was quick to yank off my scarf as soon as I got outside. I don't know how women wear the veil throughout the summer heat but power to them for it.

Next I made my way to the Rüstem Paşa Cami which is located not too far from Yeni Cami. This somewhat hidden gem of a mosque is I think my favorite so far. Built shortly before Yeni Cami (1561), Rüstem Paşa Cami is somewhat "hidden" above the busy market streets. It's a smaller mosque, nothing (size wise) to compare to mosques like Sultan Ahmet, Yeni, Beyazit, or Süleymaniye, but its tiles and the immense amount of light inside match those great mosques beauty for beauty.

In fact I took so many pictures it was incredibly hard to narrow it down to posting just these! 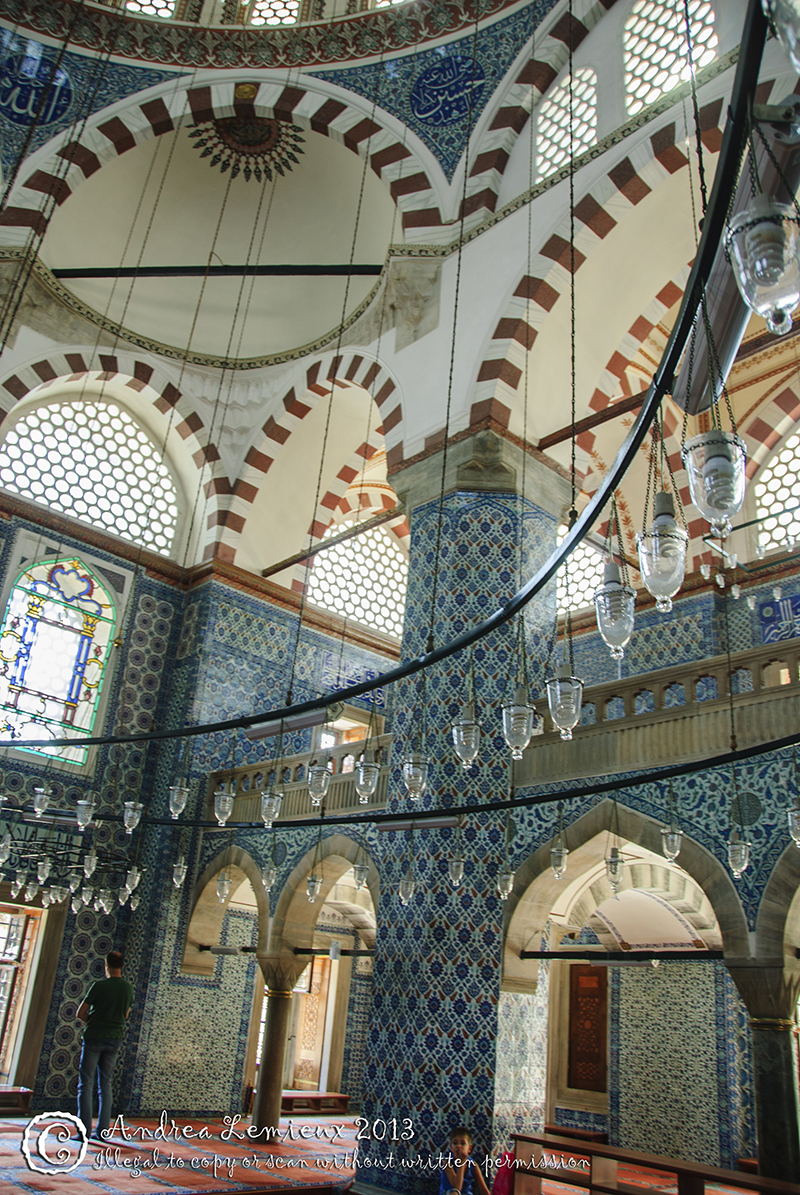 I don't know why, but when long stretches pass between mosque visits, I'm always hesitant to go to another mosque. And I shouldn't be because at least here in Istanbul people are always very friendly when you're visiting. The guys at the Blue Mosques can be jerks sometimes but the guardian here at Rüstem Paşa Cami was friendly and welcoming.

In fact I got to practice my Turkish with him. I arrived just five minutes before prayer so I only had time to snap a few pictures inside. When he came in to clear out the tourists I asked how long it would be before the mosque reopened for visitors and if it would be cool for me to wait in the courtyard. He encouraged me to read one of the free copies of the Koran the mosque has available in many languages for people to take.

While the mosque was closed for prayer I hung out in the courtyard.

And took pictures of the tiles. It was amazing how many different patterns decorated both the outside and inside of this mosque. I don't even have pictures of all of them but these were some of my favorites.

Lesson learned: don't neglect the smaller mosques in favor of the larger, more famous ones because you'll end up missing out on a lot!
Posted by Andrea at 12:57 No comments:

I think I have now been to London four times which is more times than I've been anywhere on holiday. What keeps drawing me back there? Largely that my bestest friend lives in London but on this trip the Indian food didn't hurt either!


Indian food in Istanbul is both mediocre and expensive so a trip to London's Brick Lane was most welcome! My first day in London while Sarah was working I hung out in Chinatown enjoying decent Chinese food (that situation here is almost equally as abysmal) and went to the Prince Charles theatre in Leichster square to see Joss Whedon's Much Ado About Nothing. Which was not at all a waste of precious London time, thank you. 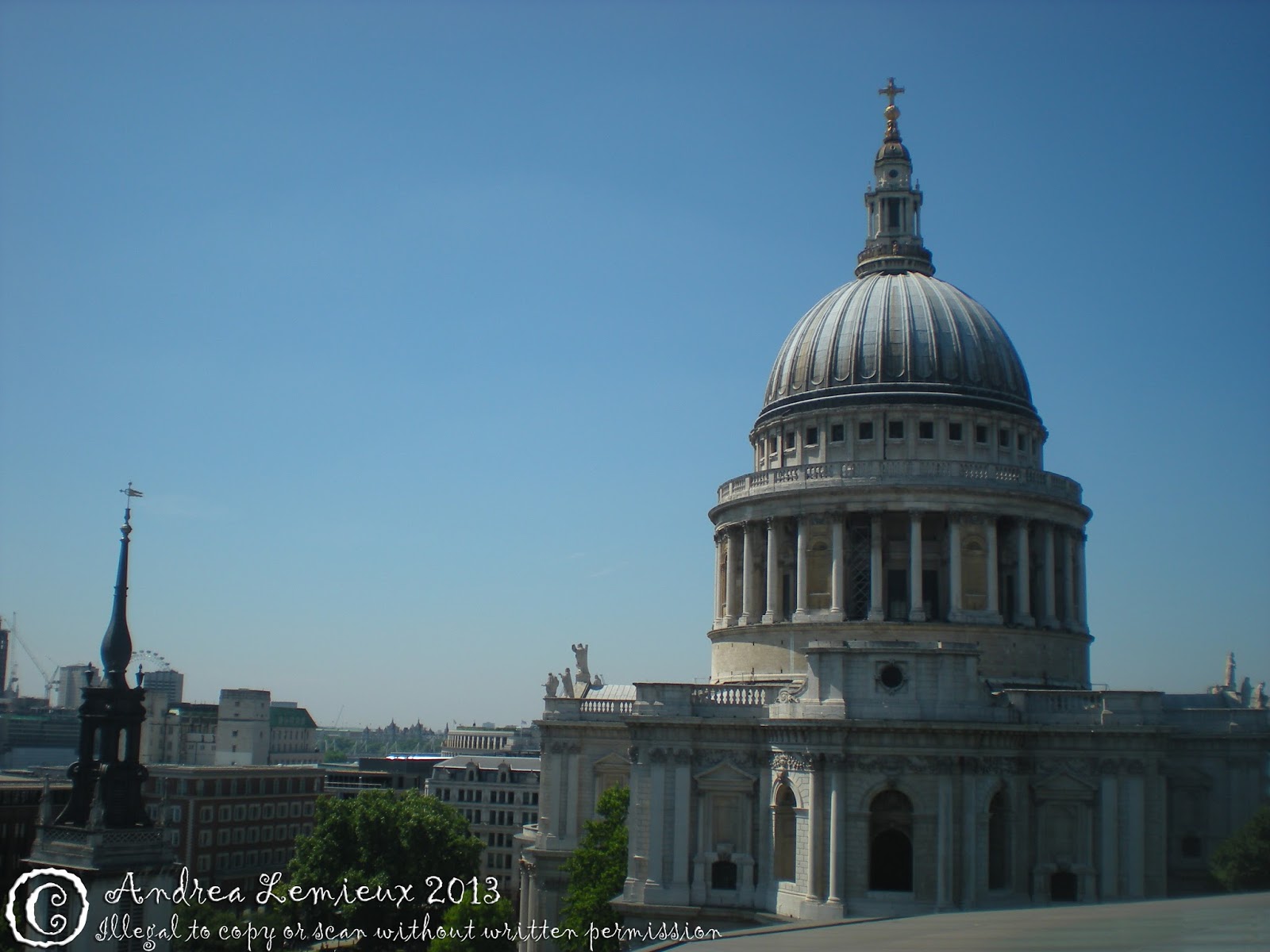 The next day was jam packed. We went to Saint Paul's in the morning and I must say, for 16 GBP (!!!) I think it's rather cheap that you can't take pictures inside. And I would have loved to it was gorgeous. The highlight of Saint Paul's though was tea! Four trips to London and there was finally time for a proper tea.


After tea we went to Olympic Park for a concert put on for volunteers from the Olympics. And no I wasn't a volunteer but Sarah was on the list so yay! A variety of brief acts was interspersed with long talks from people encouraging everyone to sigh up and volunteer for things. I felt briefly inspired to do so actually but in the end did not feel so bad for quashing the sentiment since signing up to volunteer in London wouldn't do me or anyone else any good!

The two acts I most looked forward to were Bond and Eddie Izzard. Eddie!!! Bond played one piece and left which was rather disconcerting. But I Eddie was still to come so all was well! Until that is, Eddie came on. In the 15 or so minutes he was on stage he managed to alienate a great swath of his audience in the first 3 minutes and then proceeded to rehash old material, largely from his Dressed to Kill show. And while I think Dressed to Kill was genius and it remains my favorite of his shows...I was ready for something new. So if our Google alerts picks this up, be ashamed Izzard. Be ashamed and write new stuff!

The best 'act' was Boris Johnson, Mayor of London! I could see why he is popular.


The next morning it was off to Bournemouth! Originally we were supposed to go to a different town and hunt down 50 some statues of gorillas but it was going to be cloudy there so on the way to the train station Sarah researched a new destination for us. 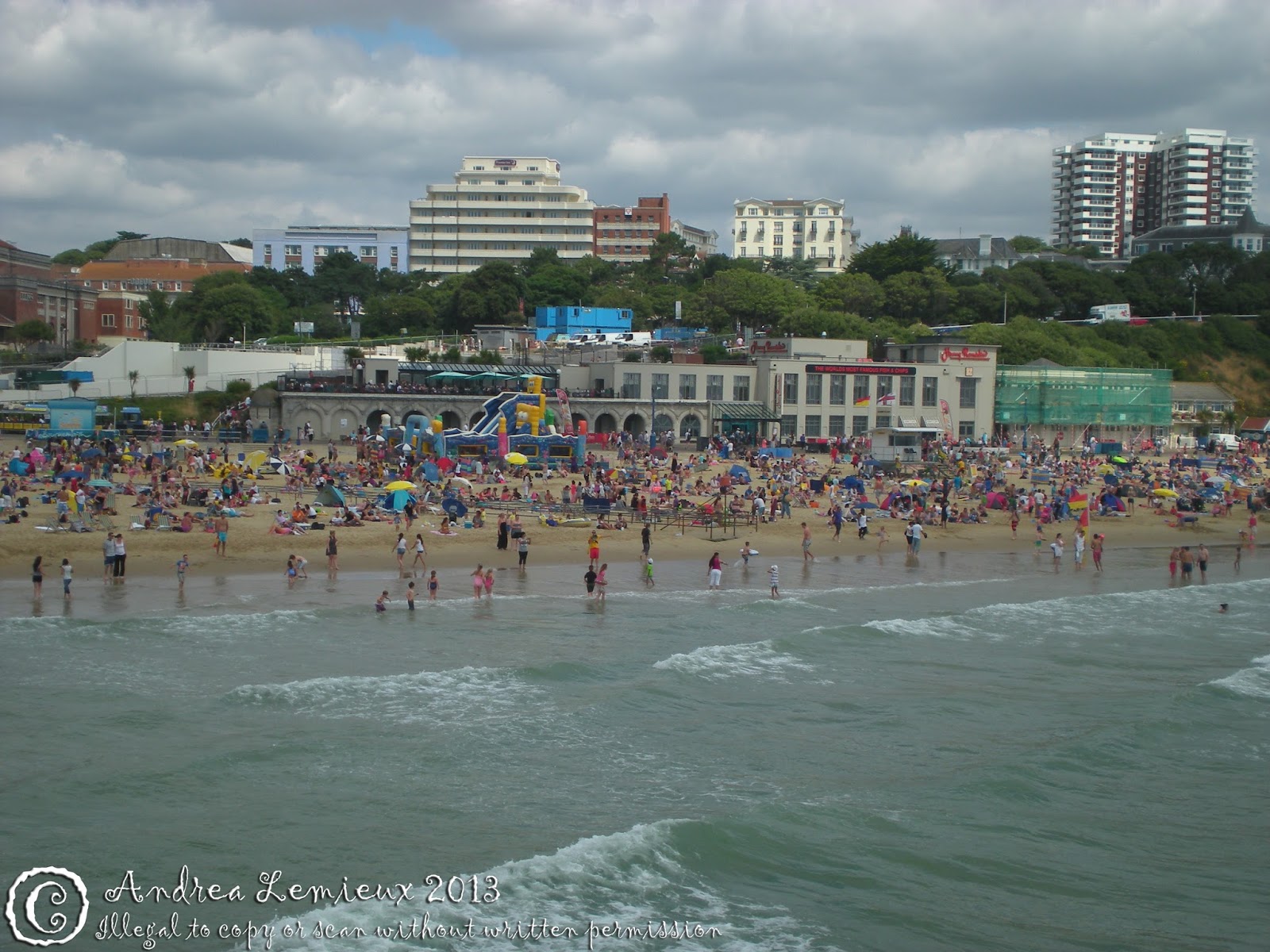 Bournemouth was lovely. Rated one of England's best beaches, I believe, it's long and sandy and is the home of the traditional beach hut! And while very busy, the beach wasn't crowded. By the time we were done wandering around and wanted to sit for a while; there was plenty of space for us. 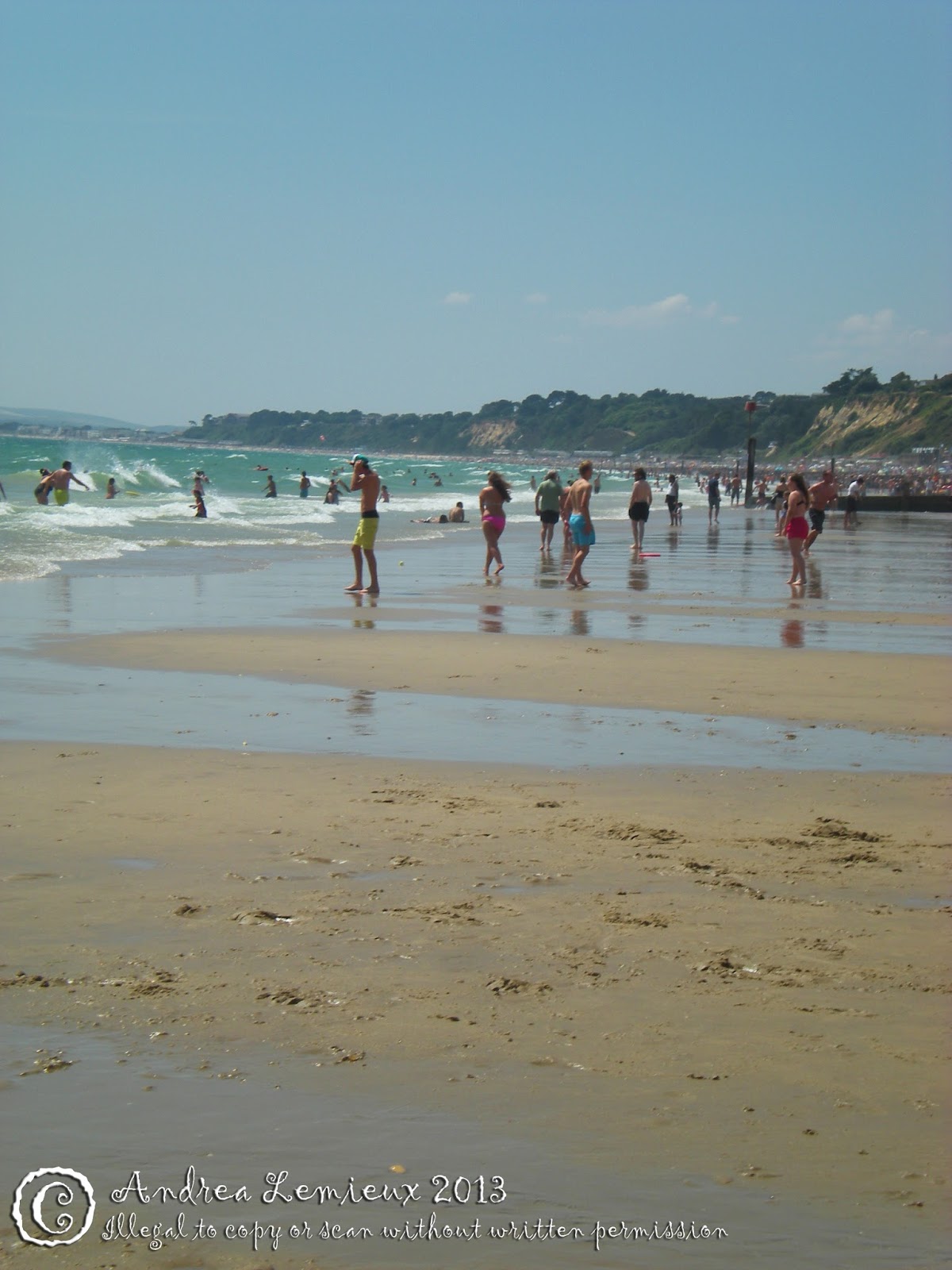 After a long drawn out winter, England is experiencing actual summer. I heard a lot of complaints about how hot London was before I got there but after coming from DC where it was, 33-35ish, the maybe 27 in London was quite refreshing. For me anyway! Refreshing or not, naturally I got a little sun burned at the beach because that's what I do. 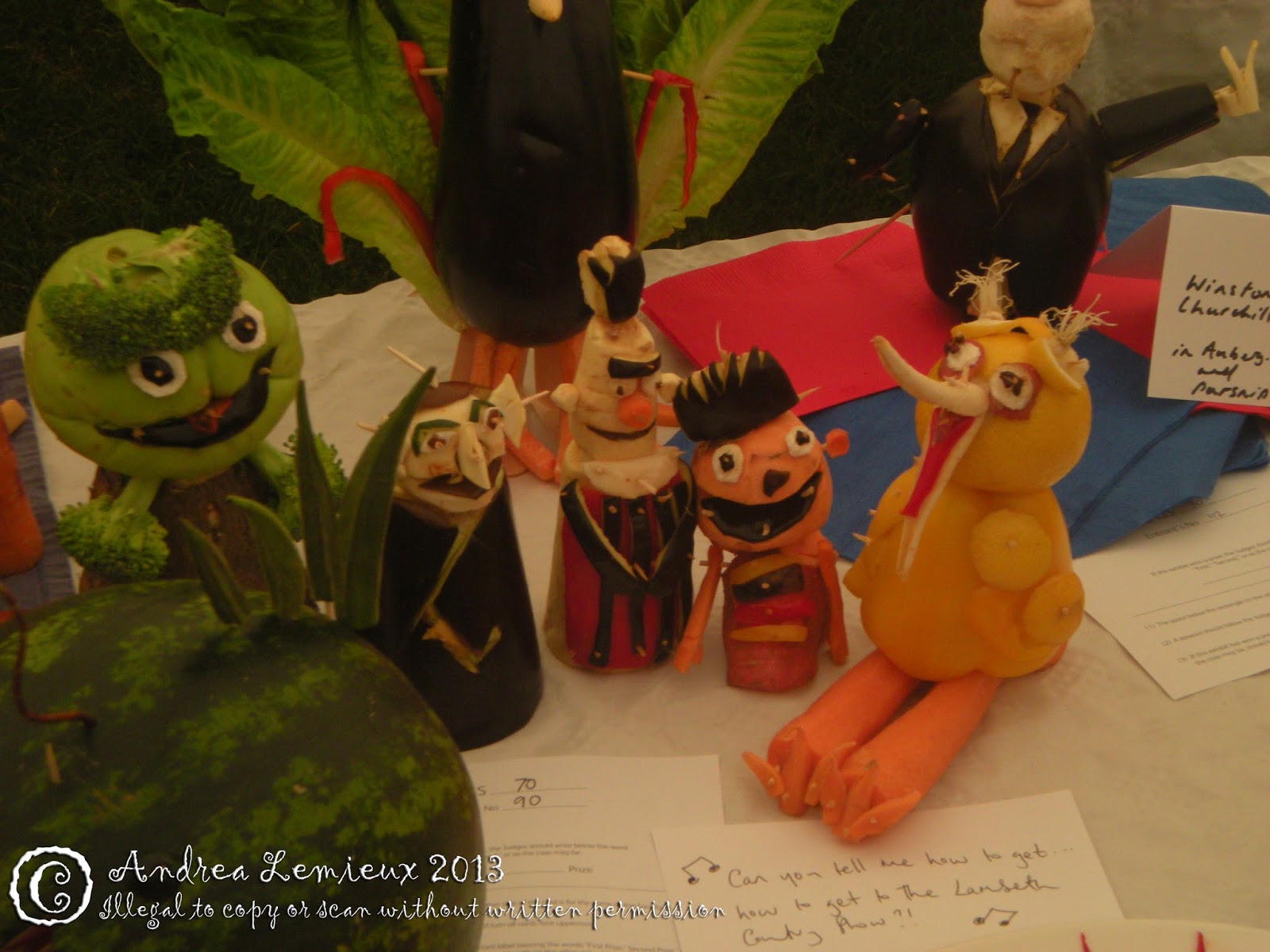 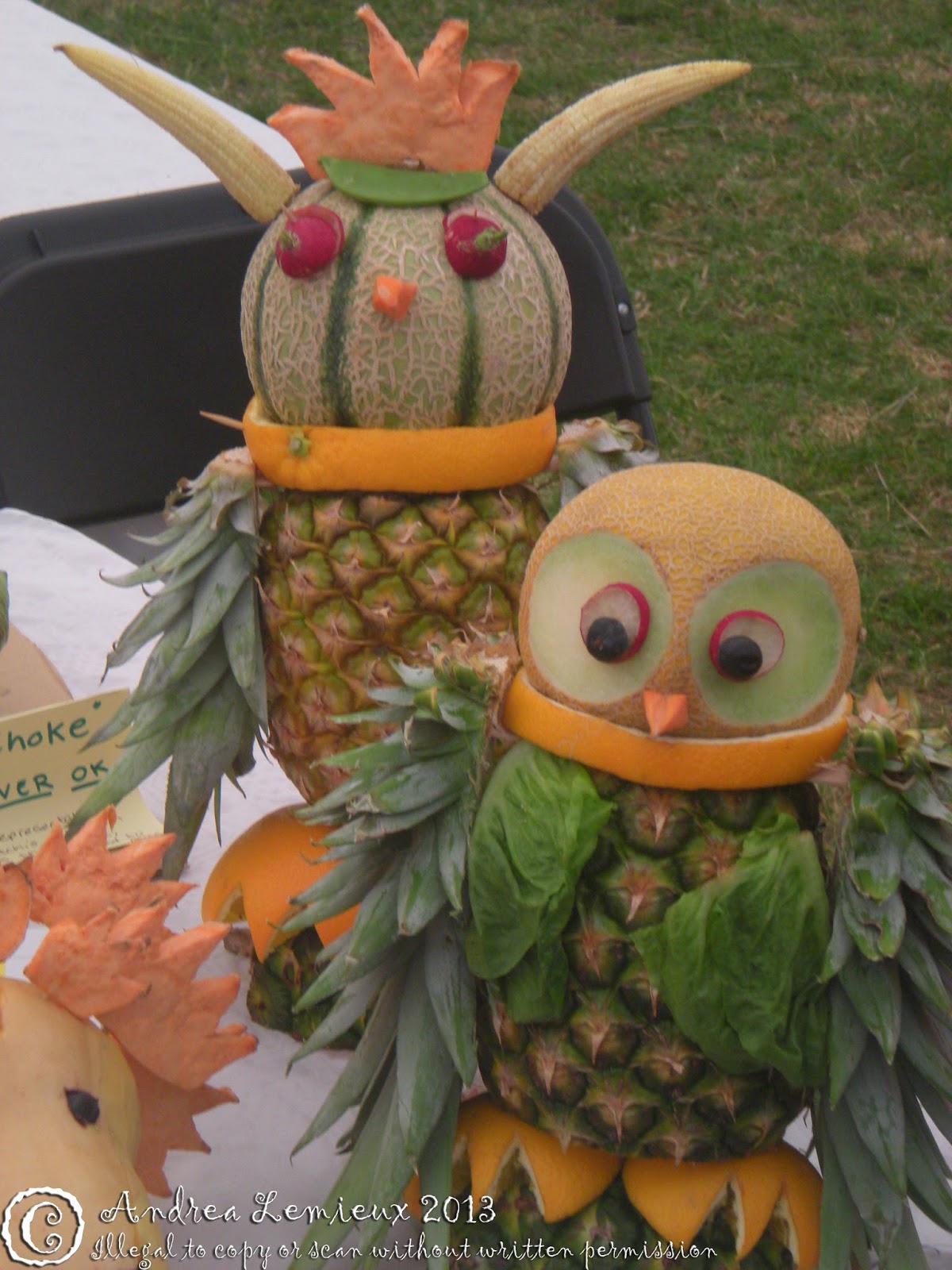 My flight was early Sunday evening so before leaving for the airport we visited a local country fair in Brixton. I love country fairs. The food and dodgy rides, both of which could possibly kill you, are usually the highlight for me. However I quite enjoyed the produce sculptures. Vegetables should always come like this! 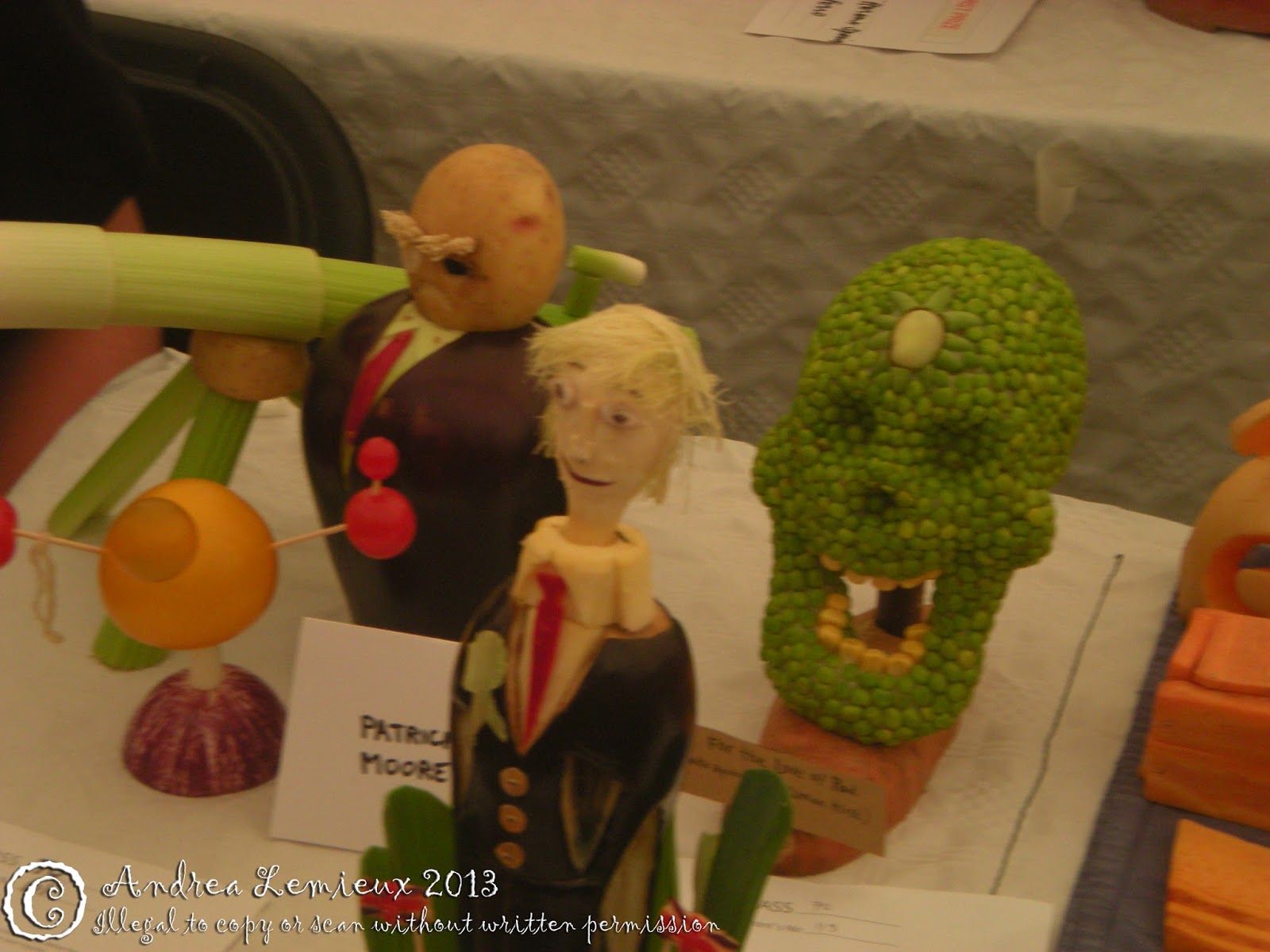 I might even start eating cucumbers if they looked like cute garden gnomes. I was also impressed with several of the award winning peas-another vegetable I don't eat. They just looked so perfect.

At this particular fair I was most excited for the camel races. Camel races and English country fairs do not seem synonymous, all the more reason to go see one, I think! Unfortunately much like Eddie, the camel races (which I pictured taking part on a big track with camels racing round and round) were a little disappointing. However I love a camel so I'll take 'em however I can! 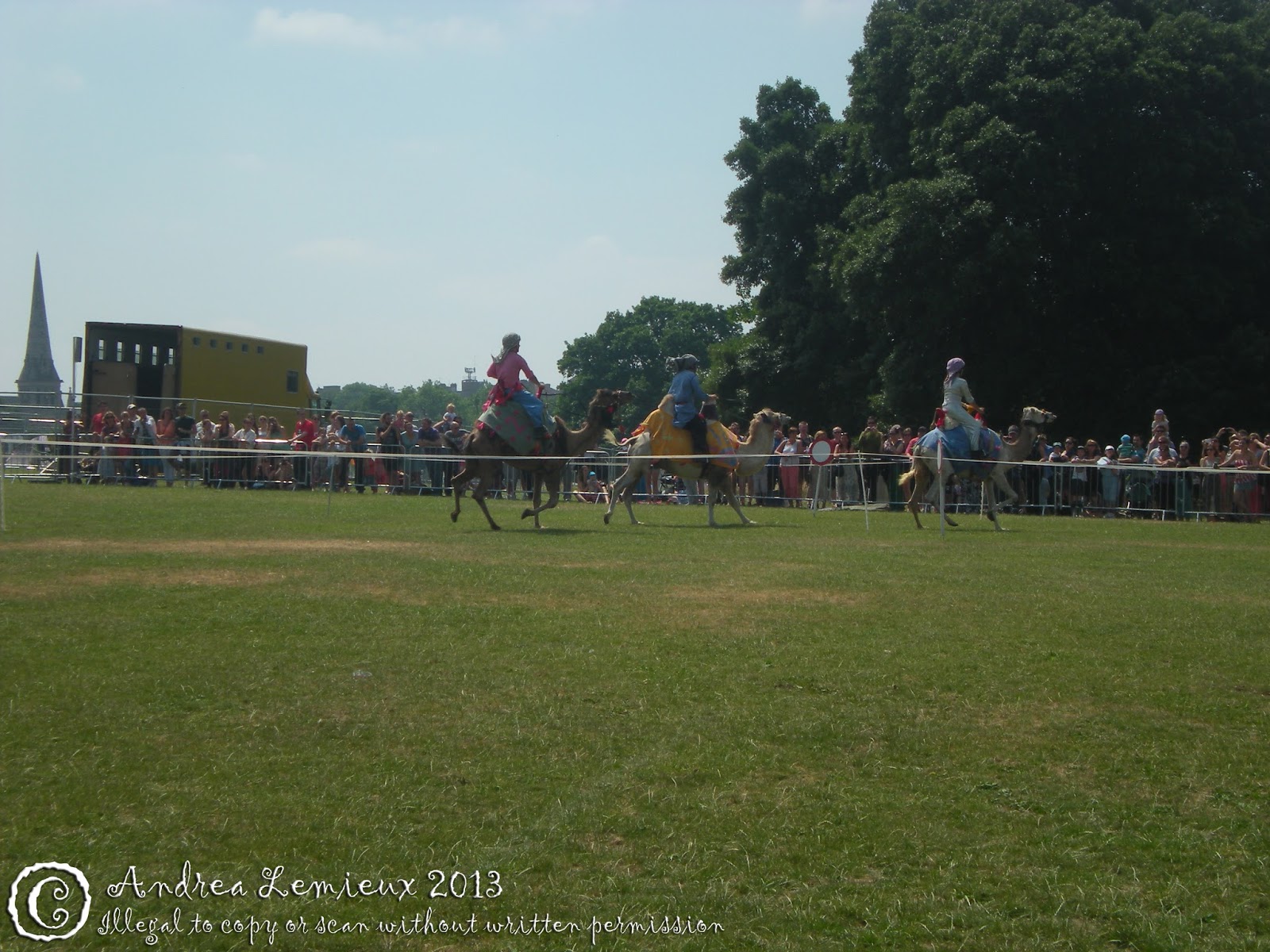 All in all my fourth trip to London was a great one, and it won't be the last either. I was sorry to leave, mostly because I miss hanging out with Sarah. Little did I know, I had one last London delight left. To honor the long running and ever popular cult icon that is Doctor Who, Heathrow Terminal 5 dressed for the occasion! 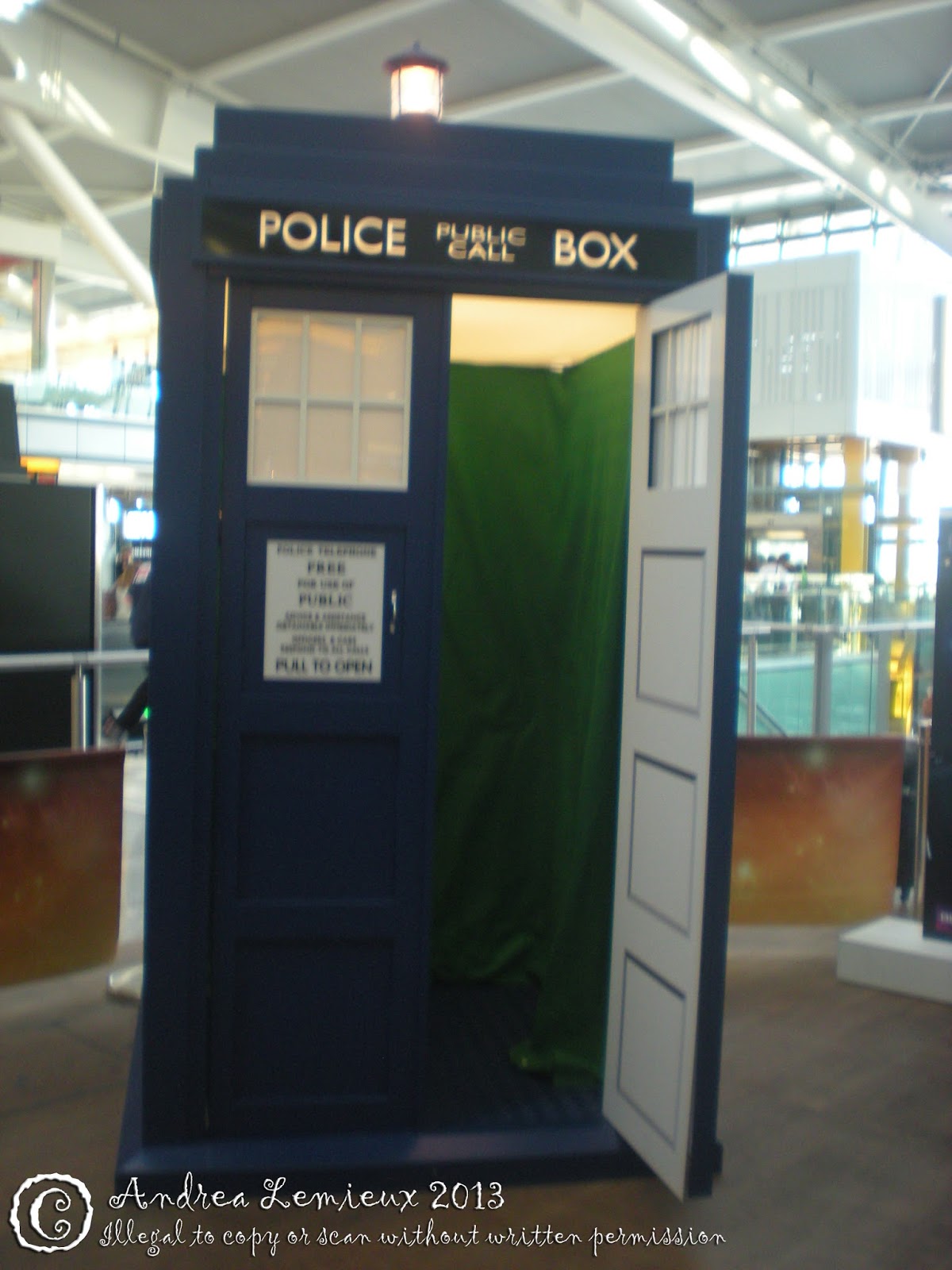 Sadly no one told my two favorite doctors (David Tennant and Matt Smith) that I was at Terminal 5 so neither tumbled charmingly from the Tardis ready to take me on awesome adventures (can you imagine the blog posts?!) so I boarded my flight back to Istanbul to look for new adventures there instead.