This has been my year for bucket list traveling! First a safari in Africa and now Scotland. Scotland may seem less exciting to some but it's been on my travel wish list for about as long. I mean, have you heard them speak?! 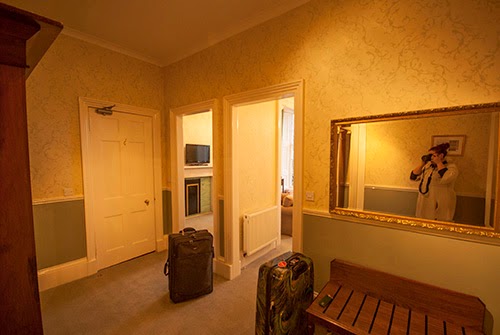 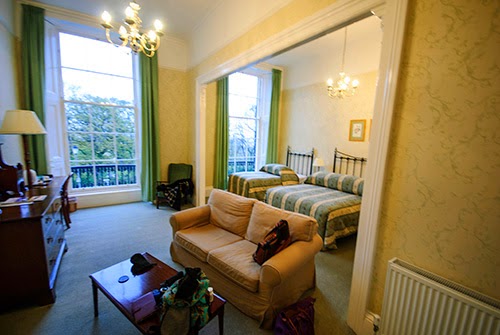 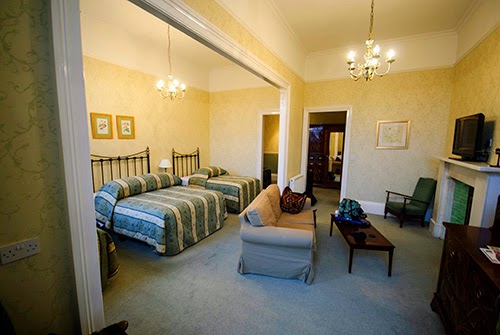 First of all, if you're ever in Edinburgh you need to stay at Adria House. Those pictures above? Our room. For a mere 80GBP/night. The room was bigger than my entire apartment. It's really well located and the brother-sister team who run it are so welcoming, friendly, and helpful. 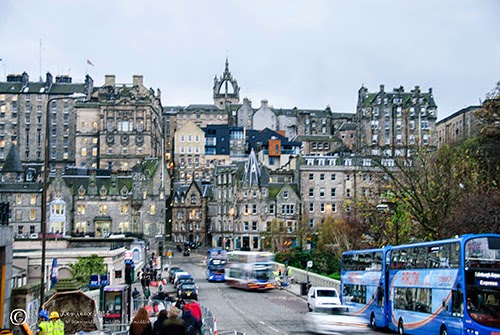 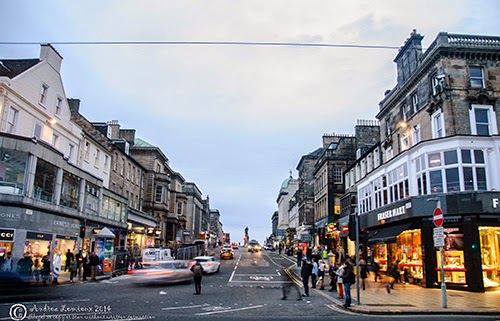 I know my sister is going to roll her eyes at this post. She always calls me out for only taking pictures of buildings. Not taking pictures of buildings in Edinburgh is impossible though! This city is so old and it you can feel it under the thin layer of modernity. The "new" city is 200 years old for pity's sake. And the instant you plunk both a castle and a palace at opposite ends of a street you can't help but feel the history. There's a reason the city is a World Heritage site. 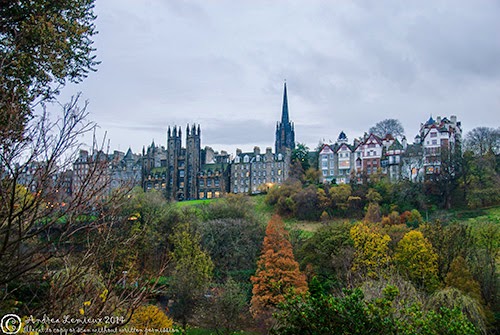 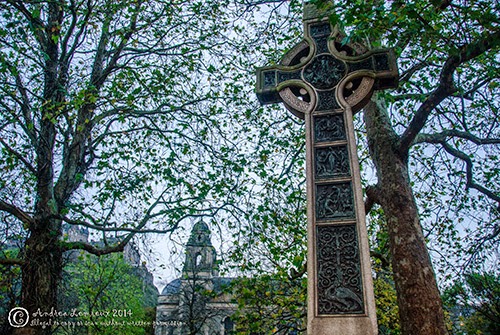 Unfortunately 95% of my pictures have white or grey, at best, skies. This is not actually a complaint though. November in Scotland and all we had were grey skies and a few brief showers? We had only one rainy (i.e. downpoury) morning but all in all we got really lucky with the weather. We also got ourselves a little lost the first afternoon. Having just come from London we were prepared for the early dark (4 PM!) but it didn't make finding our way any easier. Sometimes getting lost is great though. Without getting lost we never would have found Oink. 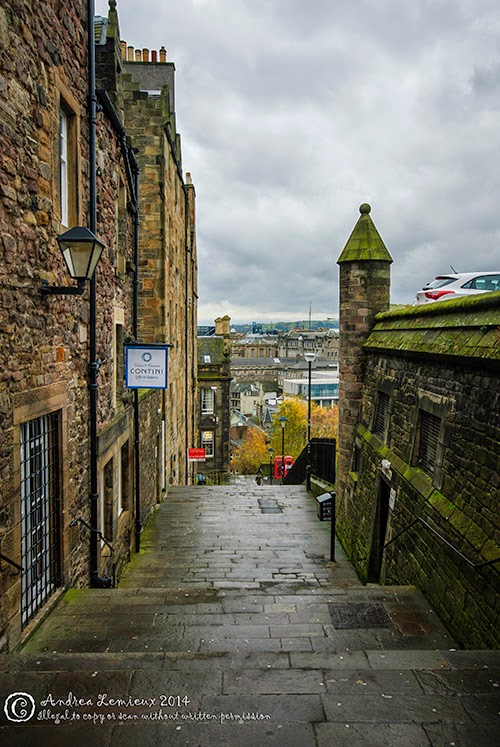 What is Oink? Only Nirvana for the pork lover. They do one thing: roast pork sandwiches; and they do it soooo well. If the name weren't enough to draw in pork lovers the whole roast pig in the window surely would. It's what caught my attention. At Oink you choose your size sandwich, haggis or sage and onion dressing (like there's really a choice), and your sauce. My friend L., with whom I was traveling, is from the South and she said Oink has the best homemade barbeque she's had outside of North Carolina. As good as the sauce is though you almost don't even need it. We've been roasting pigs for years for family parties (there are always enough people to put away 200+ lbs of pork) and my dad built his own pig roaster...but, and sorry for this Daddy, the flavor of Oink's pork put what my dad does to shame. It was beautiful. I went twice. 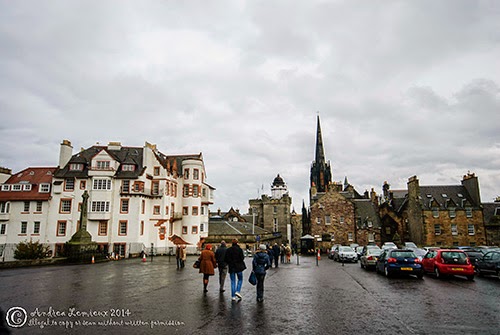 While I may wax on about it; the pork roast isn't the only thing in Edinburgh to love. There's also cider! Kidding. Sort of. Pork and cider aside, I fell completely in love with Edinburgh. If I could figure out the visa issue (and, you know, money) Sherlock and I would be there in a quick minute. Even the chill felt homely*. Although I suppose a Michigan girl would feel at home in 50 F weather. That's downright balmy where I come from. And the accents certainly didn't make me want to run away. 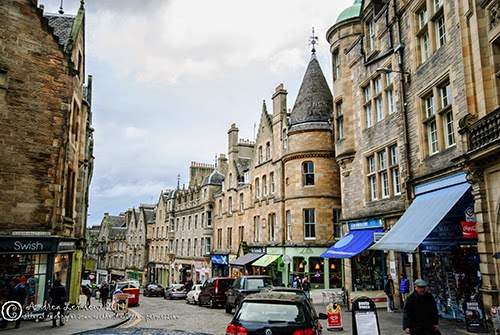 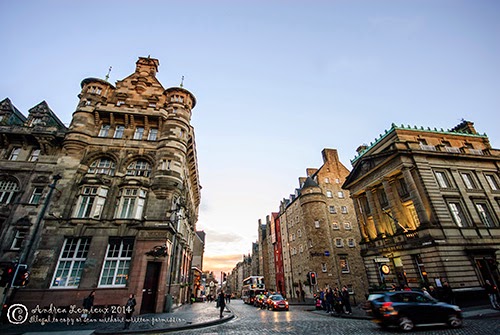 Edinburgh by evening was just as lovely, if not more so, than by day. For one thing it seemed that the sky cleared up most evenings which made for some really beautiful sunsets. At night lamp light softened the stone buildings and cobblestones and shop windows (those still open anyway, city shuts down early!) glowed invitingly from the street.


Sigh. Seriously I loved Edinburgh. So it's not surprising that I have an estimated three to four more posts until my pictures are exhausted! During our first night of semi-lost wanderings we came across a club with blacked out windows advertising pole and lap dancing. I've taken many classes on both of those; figure I could manage it. I've pretended to know how to do more complicated things for a job. Wonder if they're hiring and offer visa support?


*When and why do you suppose Americans changed the definition of this word? I'm curious.

Update: My sister said she rather liked the buildings :)
Posted by Andrea at 12:18 No comments:

And we're back! After a brief break for a trip to London and Scotland (look for those posts soon!) we're diving back into the weekly wine reviews.

For about a month now I've been making preparations to leave Turkey for good. Sherlock and I were going to pack up and move which would have taken Turkish Wine of the Week in a wee bit of  new direction. However while I was in Scotland my friends E&M of the Kenya saga told me that they're moving here! No more drinking alone! Although I maintain that Sherlock counts as drinking company even if she's not partaking.

Since I'm staying put in Istanbul for at least another year though that means a trip to the Suvla winery is on the schedule! And on that note, on to the Merlot. I was both excited and trepidatious going into this one. On the one hand...Merlot. It rhymes with 'no' for a reason. One the other hand...Suvla hasn't really disappointed me so far and the Suvla 2013 Merlot blends have been fantastic.


The 2013 has a nice dense ruby color. Plum and cranberry on the nose; the bottle label says I should also be getting pepper in the nose but for me at least no so much (Sherlock had no comment). It was a bit tight when I first tried it. This one wants air so be prepared for that. In the mouth the tannins are light unless I held the wine on my tongue for a while. In the front I got a lot of dark fruits and whatever pepper I wasn't smelling I was certainly tasting.

At first there was something about the 2013 Merlot that completely turned me off; something mineraly that completely prepared me for 'Merlot = no' vindication. But I decided that Suvla wasn't going to do me that way. Suvla and I have an understanding that in the realm of Turkish wines and all the pitfalls and dragons that go along with it, Suvla is my knight in shining armor. So I set aside the wine for a little while; okay it was a day before I could face it again but the point it that our mini breakup gave it time to open up. For me this vastly improved the experience.Breathing gave the Merlot a chance to exchange its initial uptight nature for something softer, really brought out the plum in the nose, and brightened up the flavor. 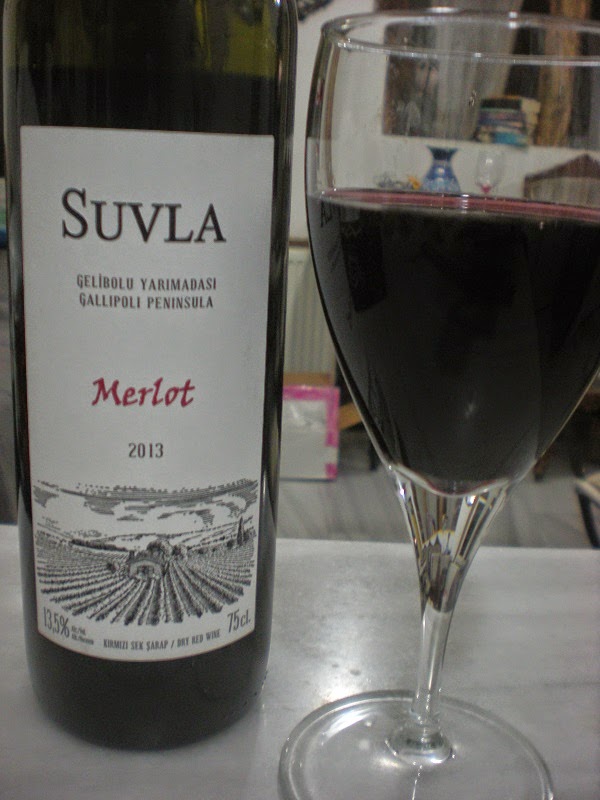 I like to think that I'm an adventurous eater and can generally place pretty high in any 'what's the most unusual food you've ever eaten' competition but I have a few firm and fast food rules:
So does this new found enjoyment of Suvla's 2013 Merlot mean I'm striking Rule 2? Abso-fracking-lutely not. What it means is that were someone to offer me a glass of Suvla Merlot I would happily accept rather than look at them with hurt because I thought we were friends but now they're trying to poison me.  Every rule has it's exception and I found Merlot's! Suvla's armor remains untarnished.


Suvla has several Merlots, the 2013 being at the least expensive end of the scale. I can't say my experience here has really made me want to work up the ladder. However I am due for a visit to the shop in Cihangir and I think this time I'll spring for one of the pricier blends. The Sir has consistently been a favorite but I have yet to try Suvla's Sur (another Merlot blend as it happens). I have things to celebrate and I think a bottle of Sur will fit the bill!
Posted by Andrea at 09:18 No comments:

Big cats are always going to be my favorites in the wild kingdom; but I do really enjoy the giraffes as well. Almost as much as I love to take a picture and make just one aspect of it color. I decided to combine my obsessions and do that to some of my giraffe pictures.

Kenya was so incredible; it left me awed, amazed, and speechless. So I'm going to end my Africa series with no more words, just the pictures. 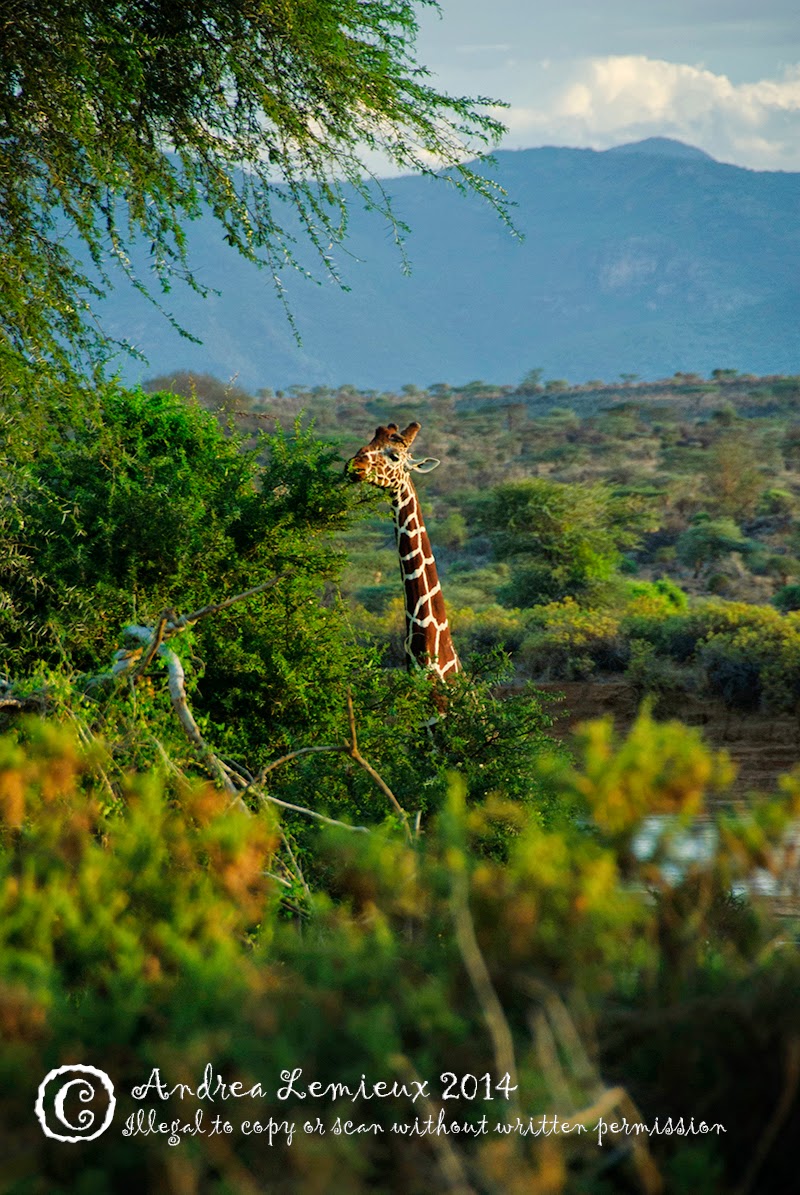 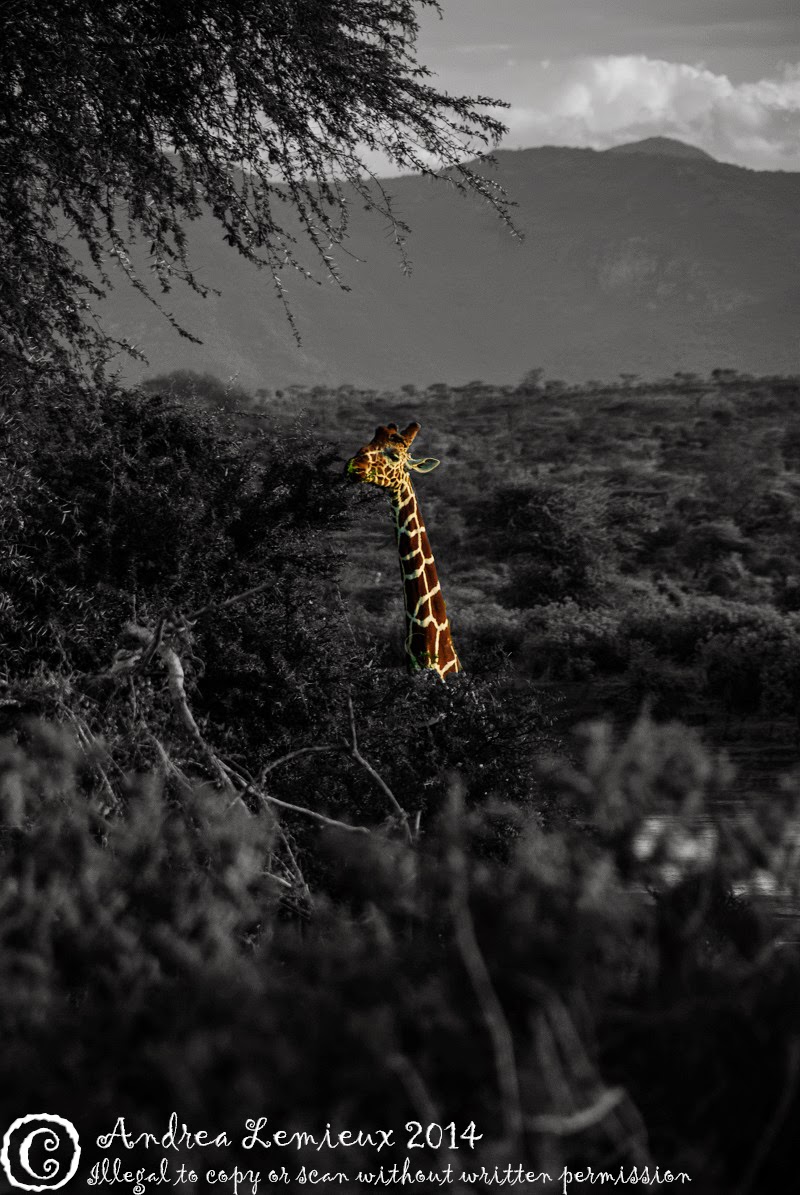 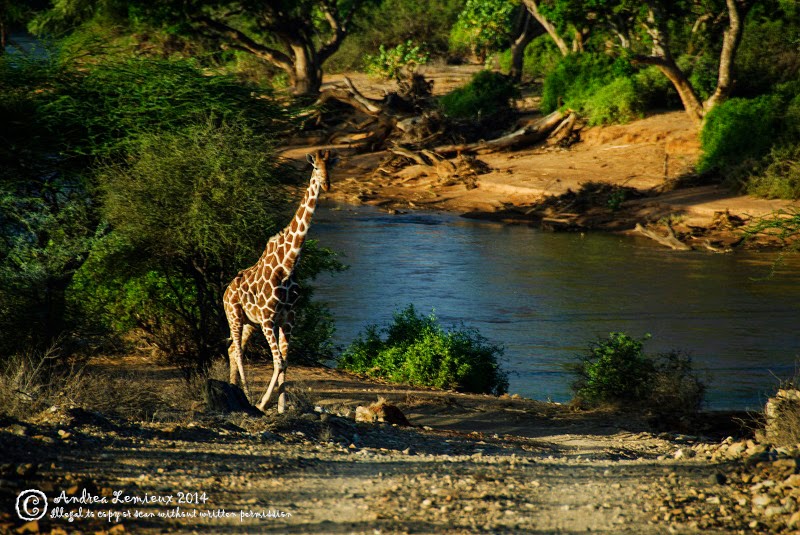 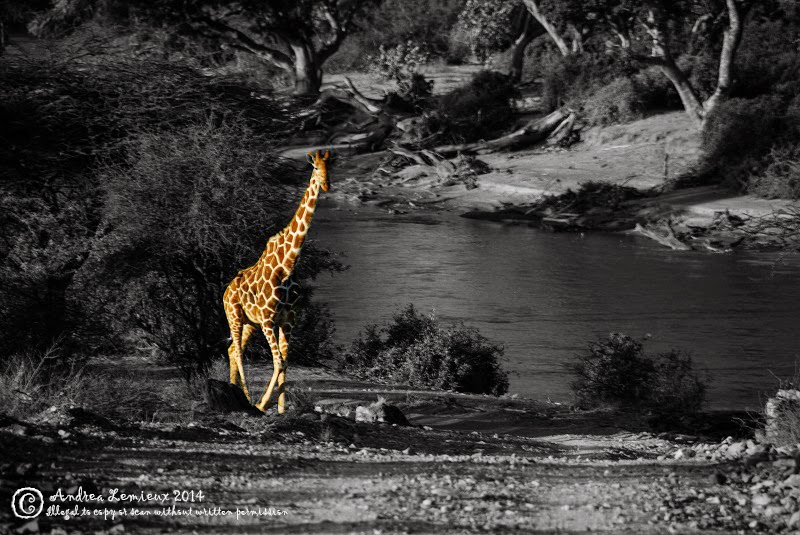 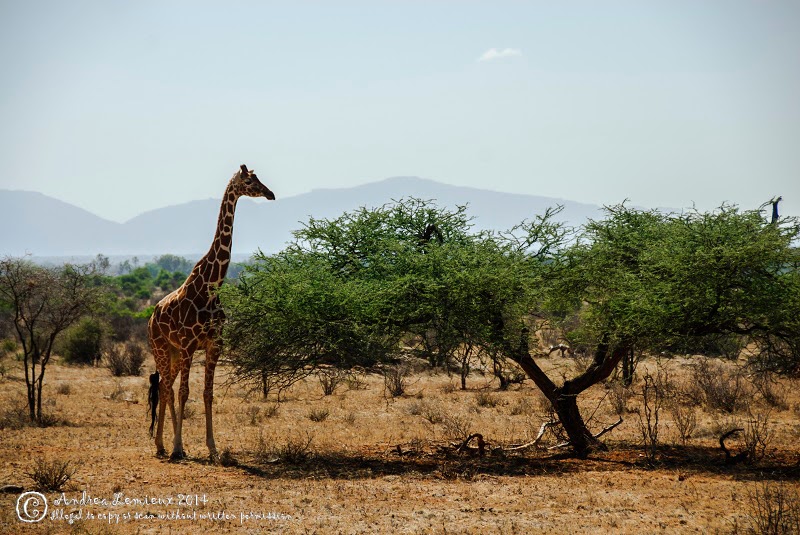 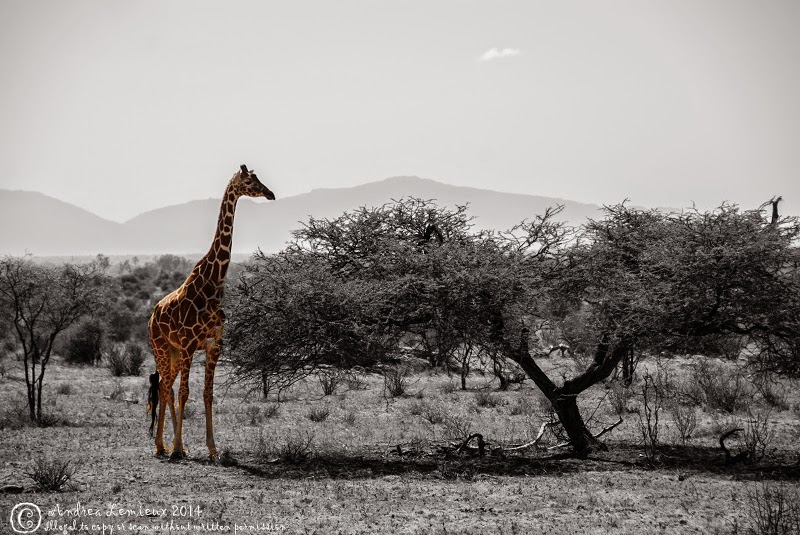 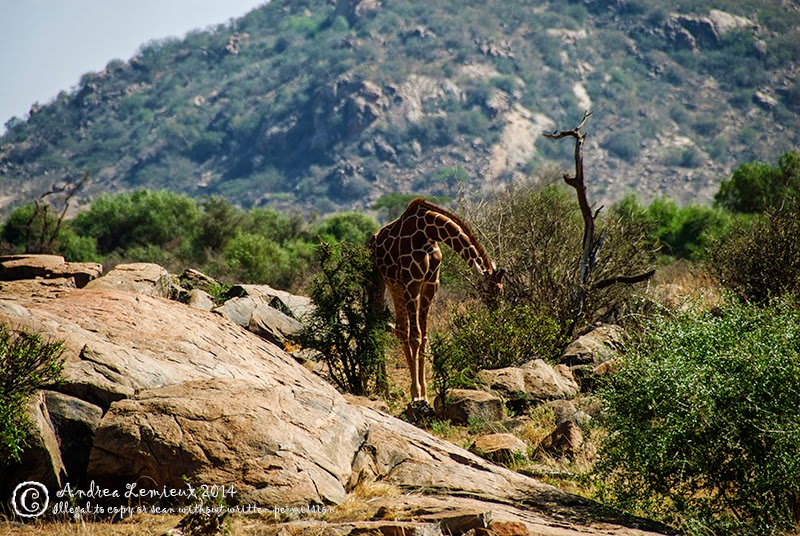 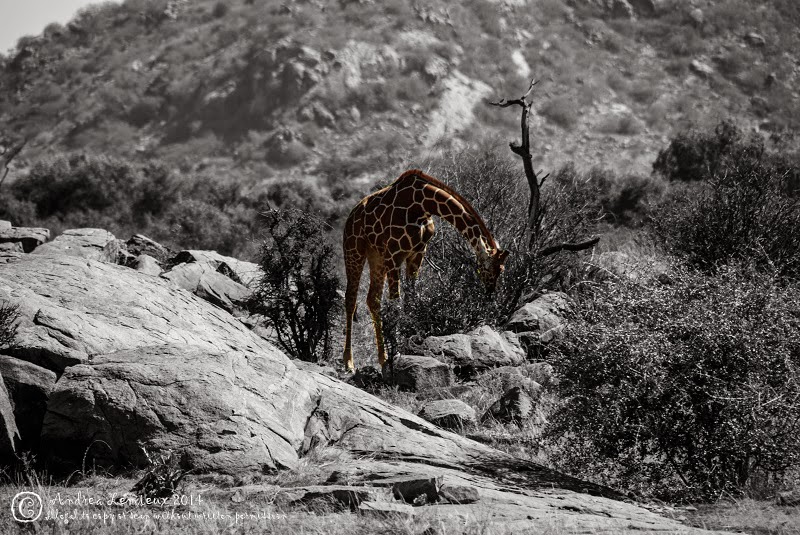 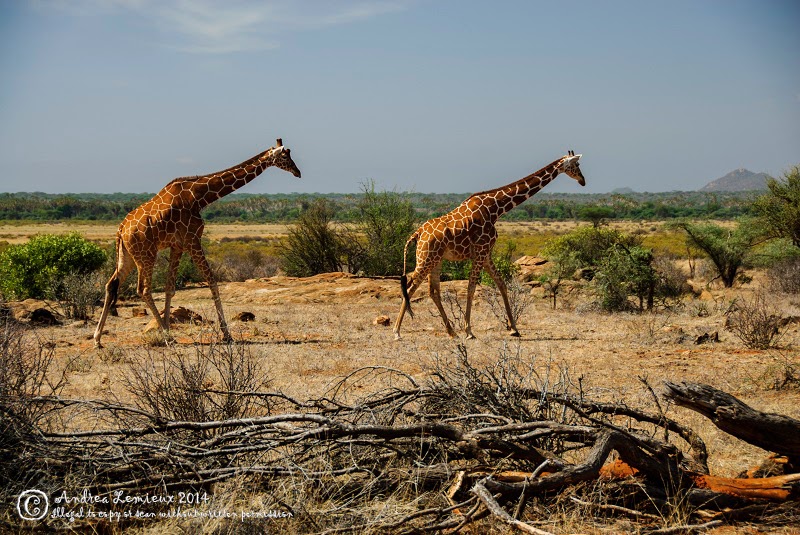 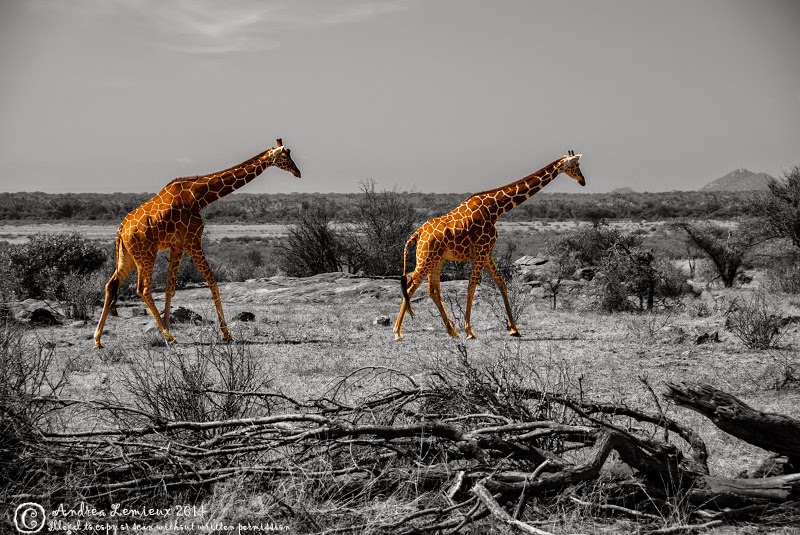 Fall continues here in Istanbul although not nearly as beautifully as when I wrote my last fall post. Instead of Indian Summer weather and blue skies we are moving into an almost early winter. Which in Istanbul means 10 C, rain, mist, heavy haze, and grey. Lots of grey. Grey like stereotype London but without the benefit of cream tea. 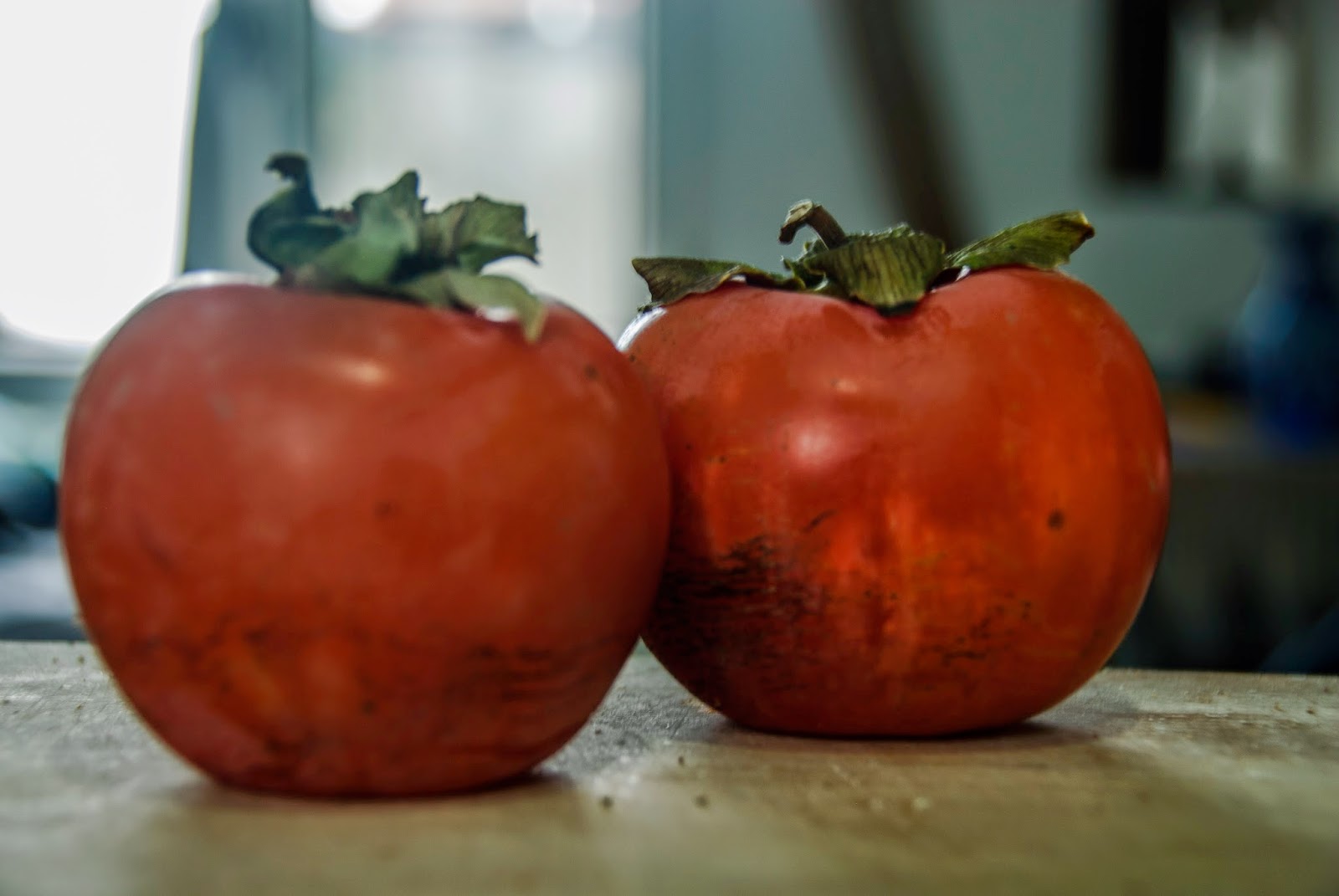 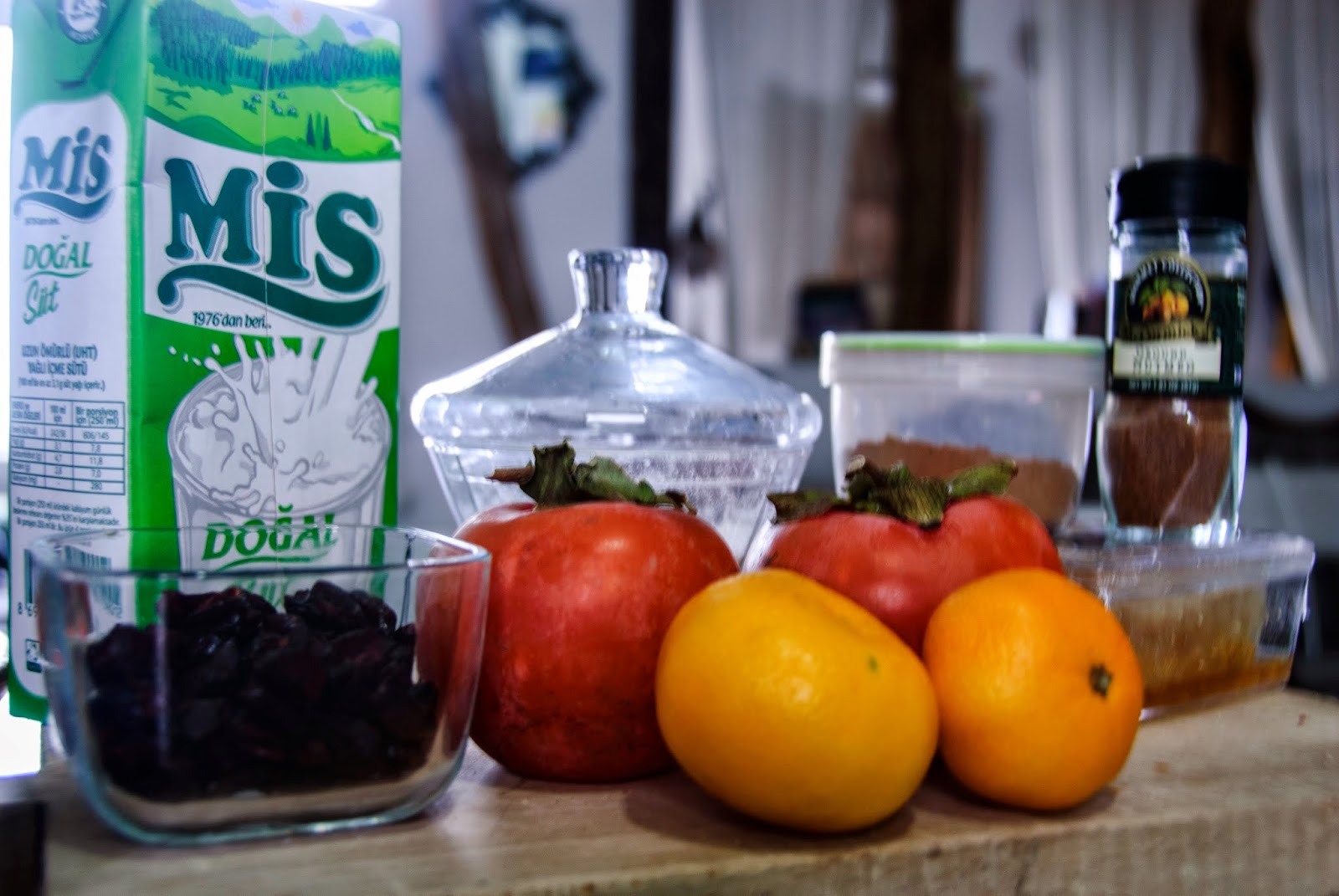 You what's not depressing about fall? Autumnal produce. Like the apples and pears of the last post, and persimmons. The persimmon is an odd fruit and with its tomato like appearance; if you don't know what it is you might not know it's a fruit. And yes I know that technically tomatoes are fruit but technically eggplants are berries so if you really want to go there... To this day the best way I've ever had persimmons is the fried persimmon cake thing on a stick Lauren and I gobbled in Xi'An (which we once tried and failed to create). Since they're so inexpensive here I decided to see what else they could do.; adding them to rice pudding seemed like a great idea in this weather. 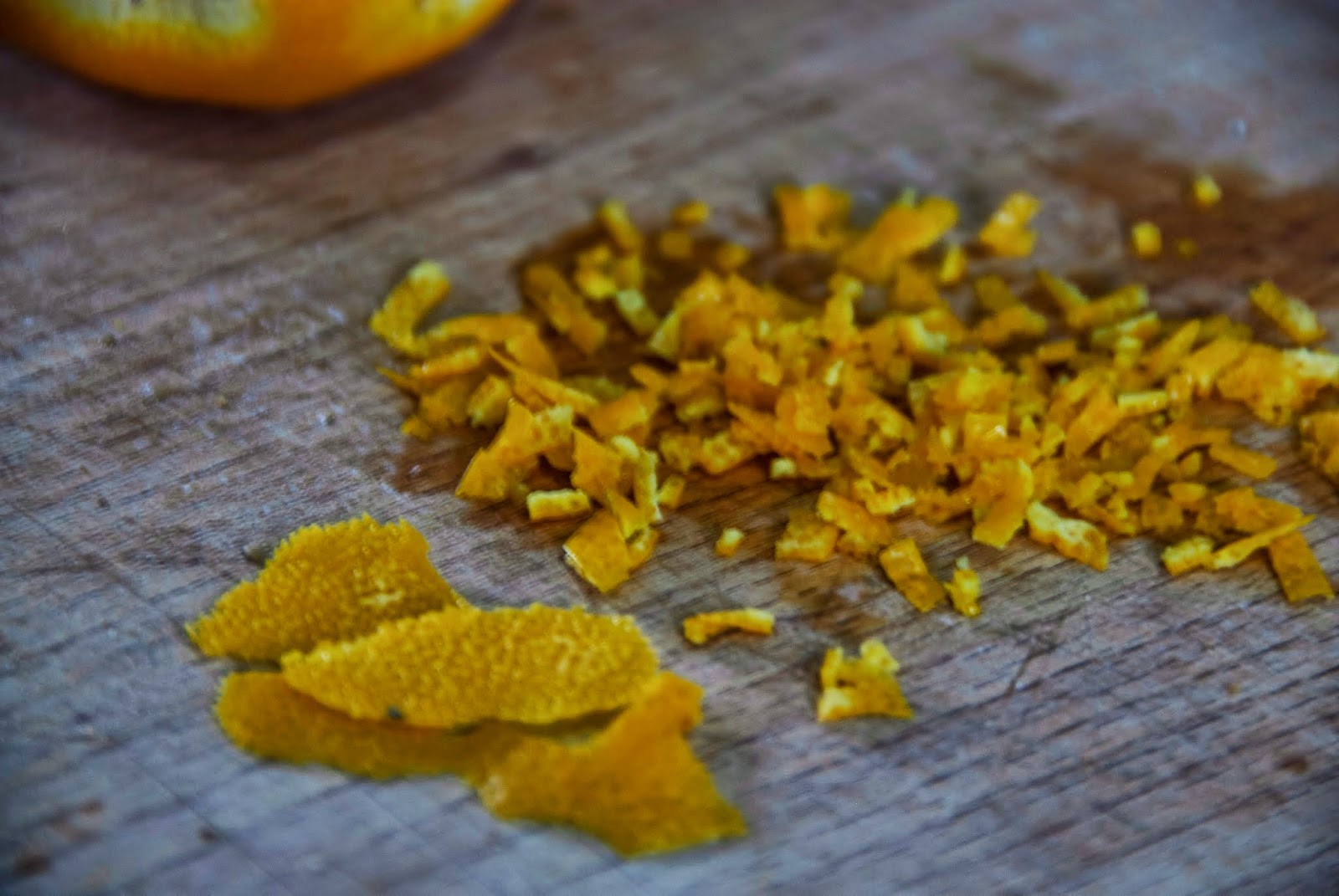 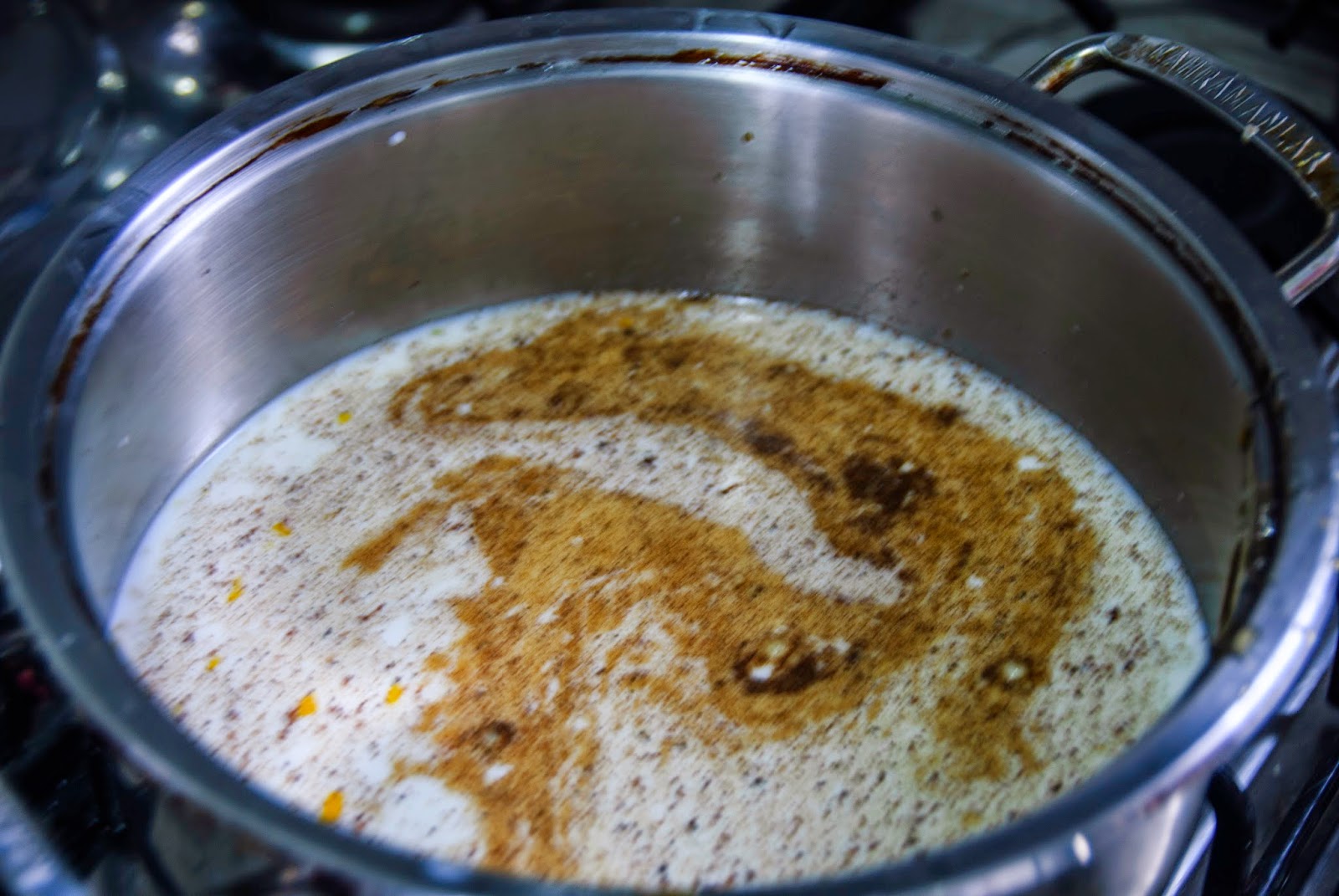 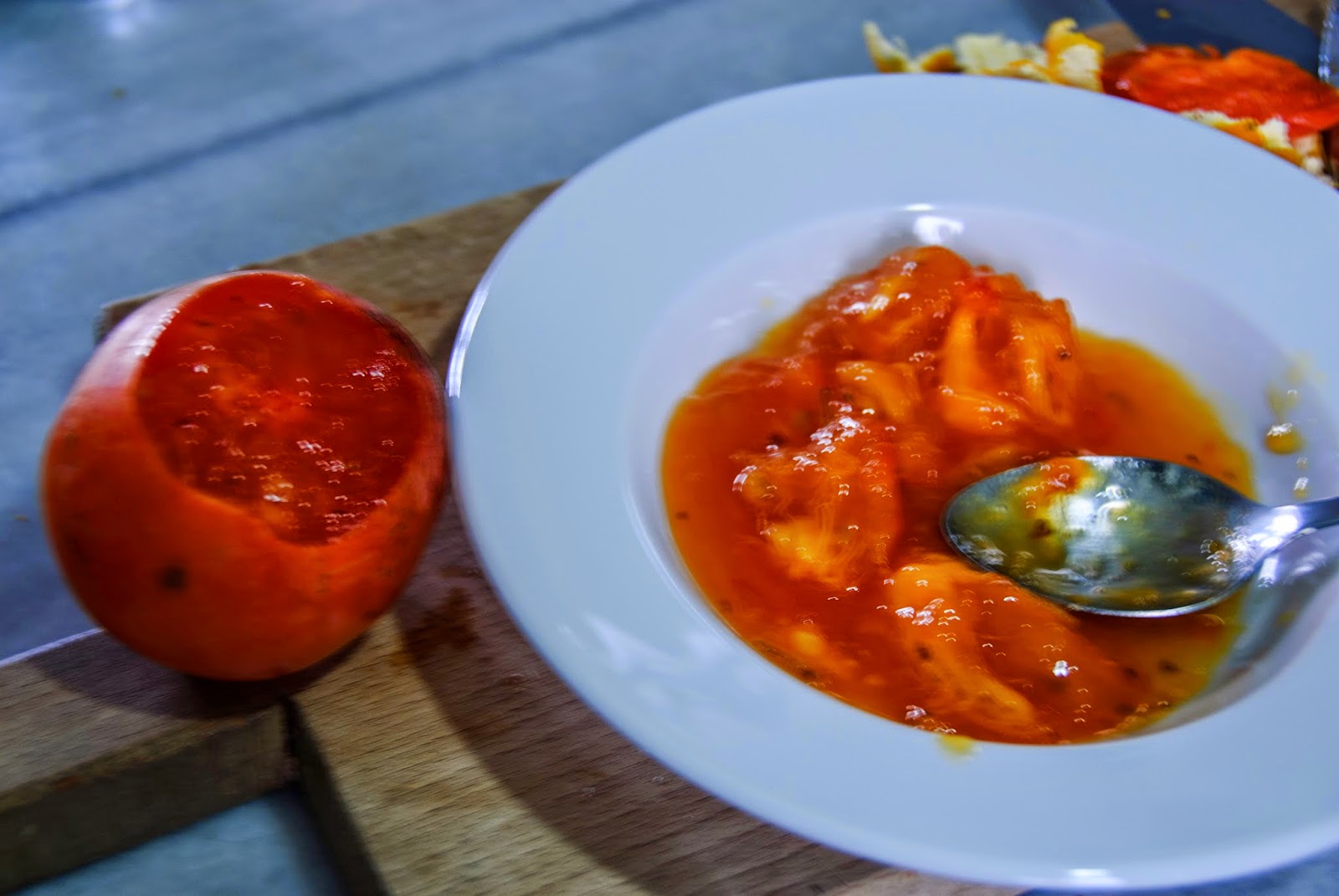 As much as I appreciate borrowing my neighbor's mini oven I do still long for the full kitchen I had in DC. I miss the little things as well as the big ones. Like measuring cups. Not that I couldn't find some here I'm sure; I'm just lazy really. My measuring cup is a coffee mug. I figure if I go on the assumption that the mug is 8 ounces and "measure" everything else accordingly I should be in the ballpark. Sometimes it works for me, sometimes it doesn't. 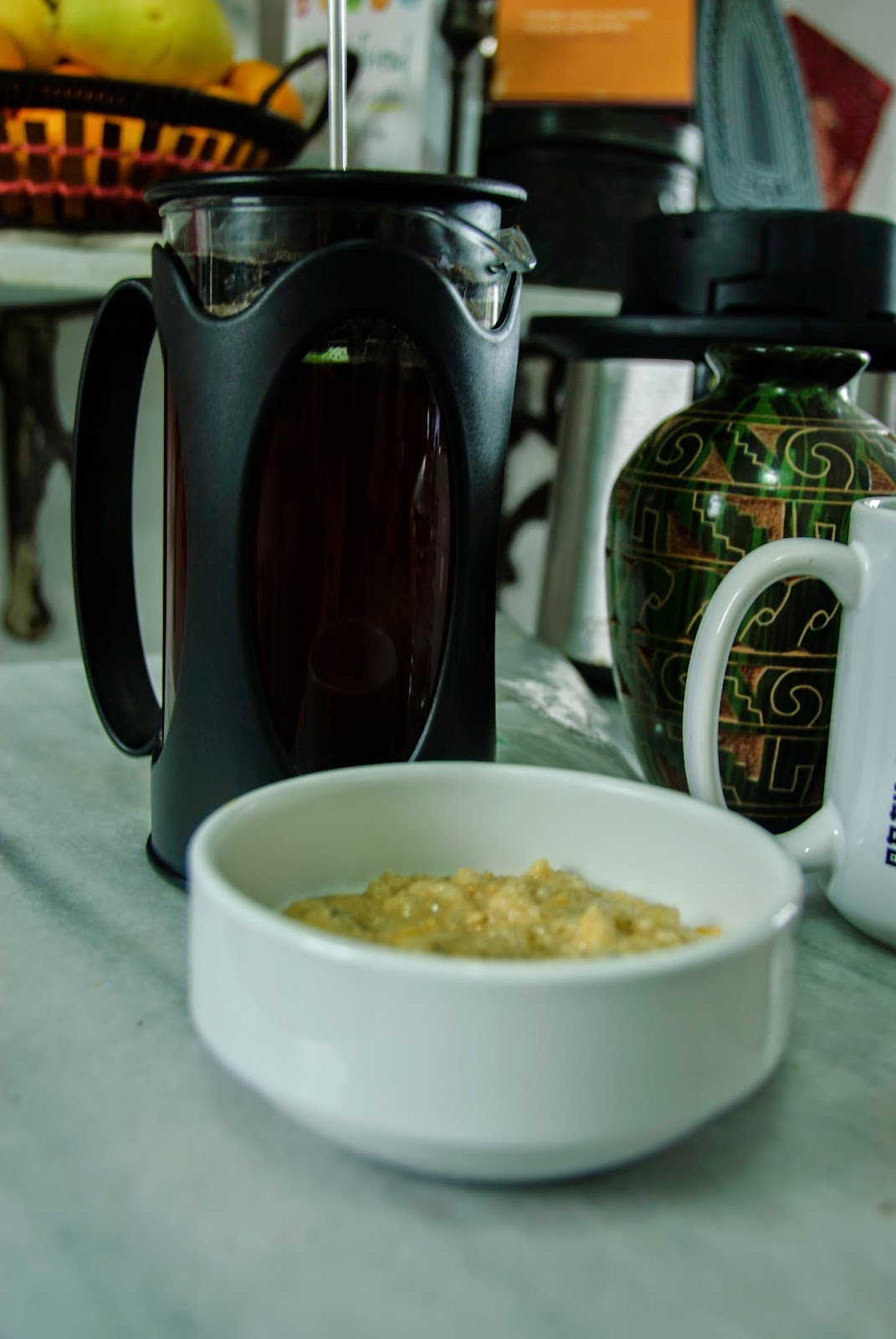 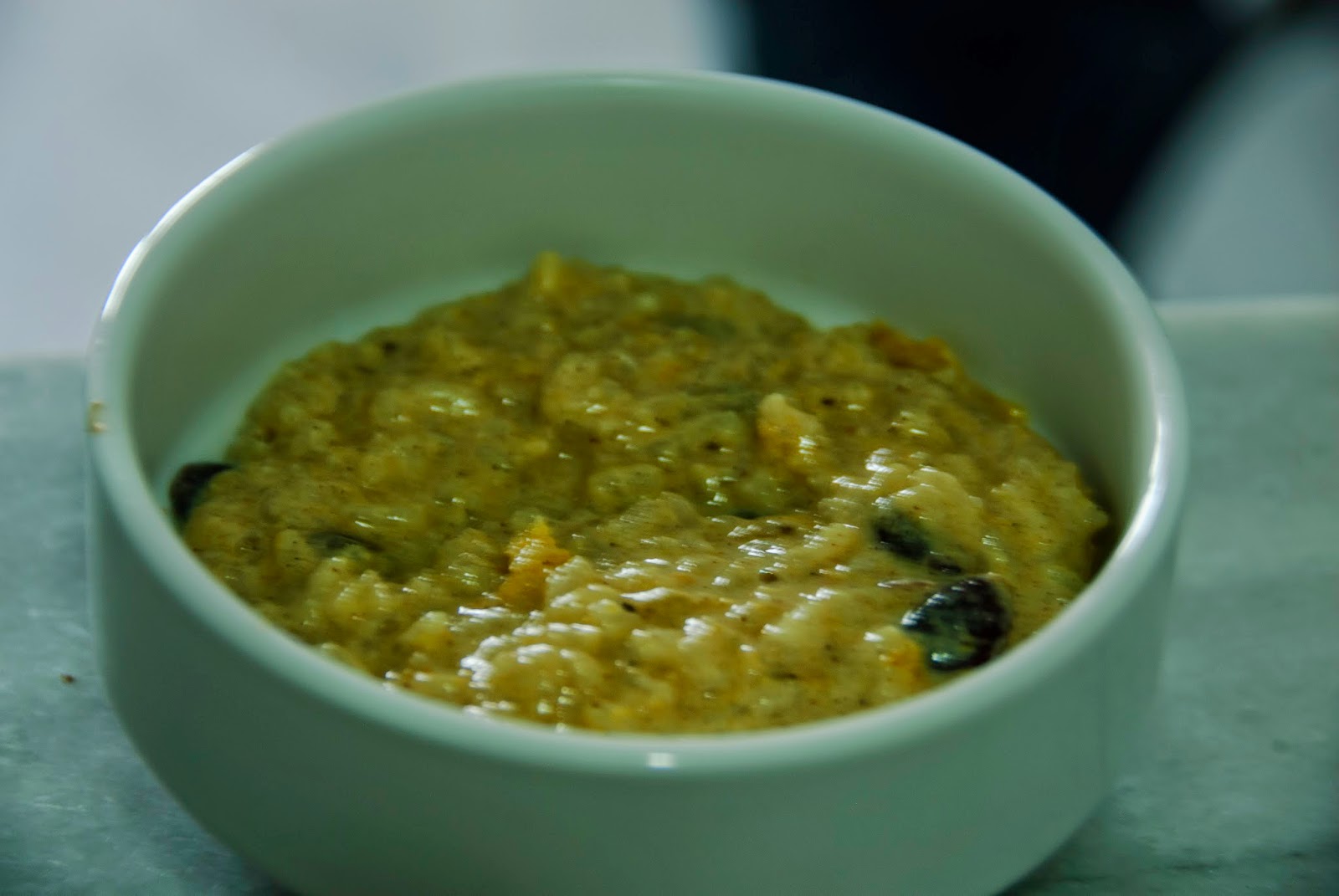 Rice pudding is such a nice dreary day food and when eaten for breakfast gives you a warm glow for the rest of the day. Adding persimmon brings it to the next level.

Turkish Wine of the Week - A Brief Sabbatical

I'm sick. It's depressing. Largely because I can't taste wine well enough to drink it. Not that that's stopped me in the past given that my mom's answer to an upper respiratory infection when we were kids was a Seven-Seven which I'm glad I couldn't actually taste because ick. But since this is supposed to be a wine review I thought it pretty useless to drink the wine if I couldn't really taste it. I was so looking forward to trying the Suvla Merlot!


I could write up a tea review since that's what I've been knocking back all week (Lipton Yellow Label baby!) but that's not terribly exciting. Although I did make chai today (with an assist from spices bought at the grocery store in Nairobi).

Since I leave on Thursday for a couple weeks that means there won't be a review next week either. I'll be trading in wine for cider while I'm in the UK! Lots and lots of cider. I'll be back on the 24 and we'll tackle the Suvla Merlot!
Posted by Andrea at 11:30 No comments: