Greece, The B Roll

I just can't stop myself from playing with the color effects in Photoshop.

A day and a half later we'd more than had our fill of Athens we so got up stupidly early and took the express (3.5 hrs vs 5.5 hrs) ferry to Mykonos. I was so glad the hotel I booked had a free shuttle service, which I'd actually completely forgot about about until I saw a guy with the hotel sign, because there were not any taxis hanging around the pier.

I use TripAdvisor to find all my hotels and, after seeing how highly it was rated for a Mykonos beach hotel, I booked us a room at the Hotel Acrogiali in Platis Gialos, Mykonos. It completely deserves the high rating it has. I would both recommend the hotel and stay there again.

Since I was kind of taking a holiday on the sly, I was in the room working while my travel companions were on the beach. Luckily I'd booked a sea view room so every hour or so I'd get up and just look out the balcony window, then I felt better.

One afternoon we took a cab into Mykonos Town on the other side of the island and walked around and poked into all the shops. Little Venice was adorable. I love the way the buildings cling to the island and stand against the sea.

And someone unbelievably, I barely used any color touch ups on these. This is what it looks like!! 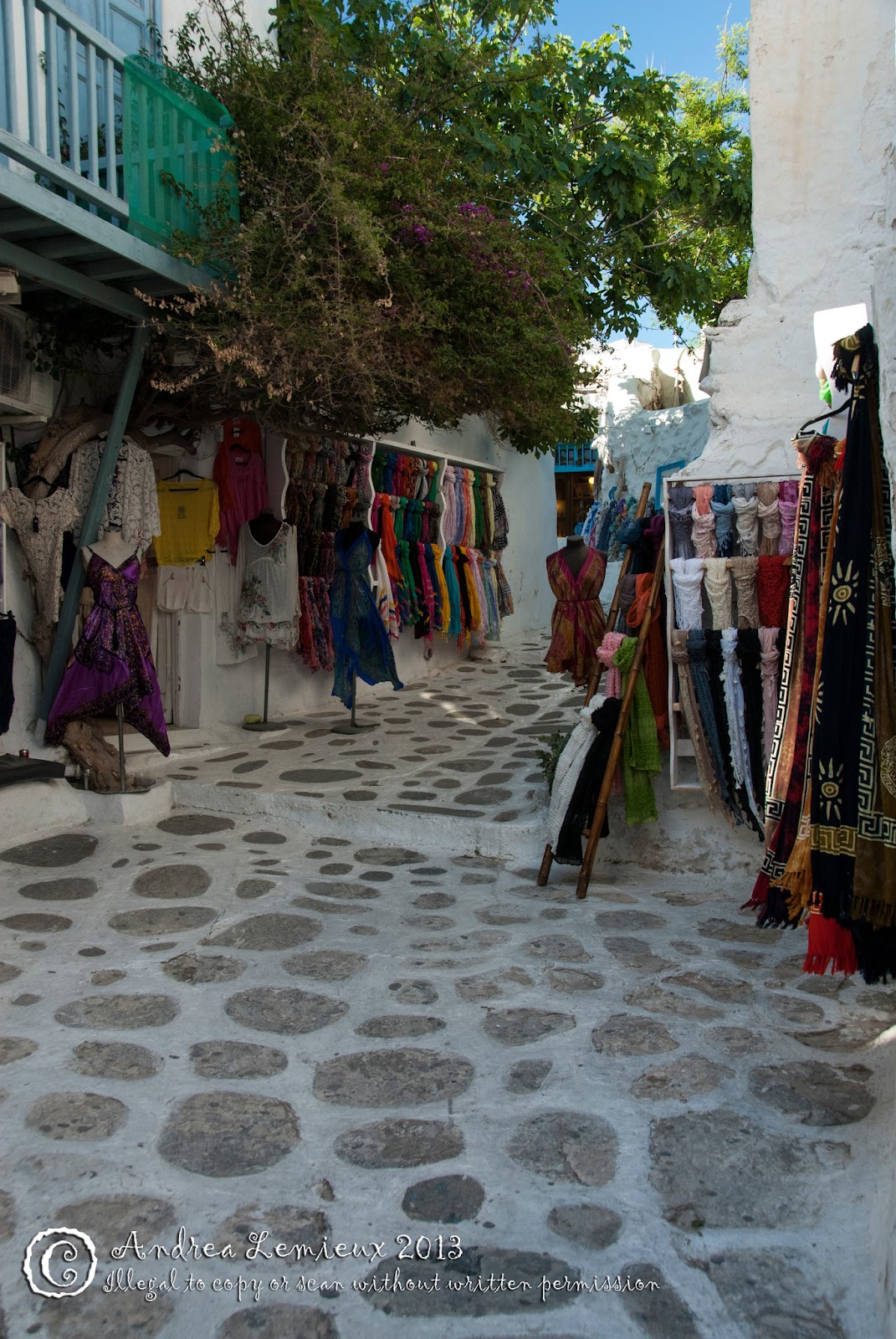 Mykonos Town itself is a labyrinth of small, twisty, turny allies and it's very easy to get lost.

Although sometimes getting lost isn't bad. 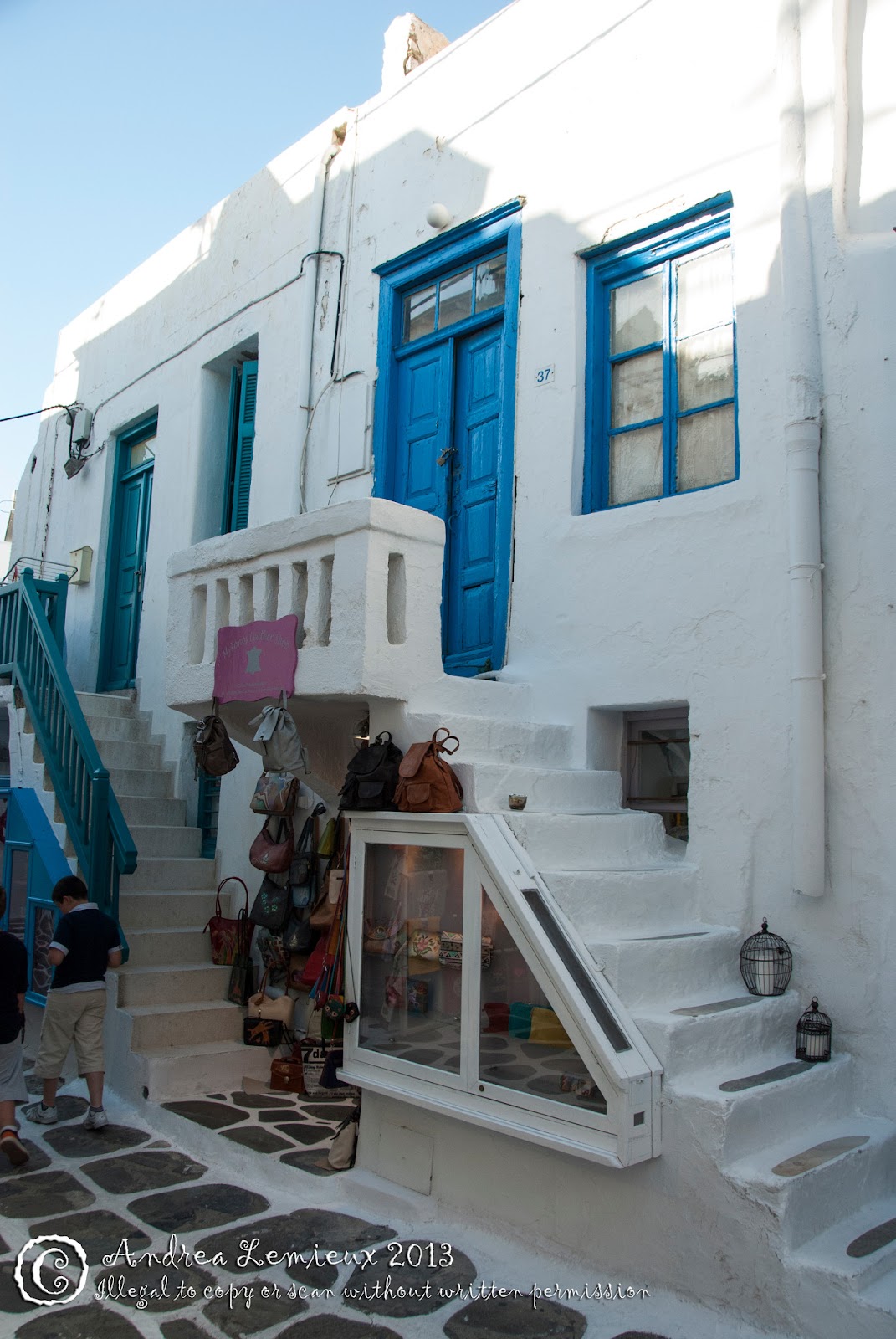 Little Venice by night was equally lovely. It was so windy though! My night photography skills are limited at best but throw in  crazy gale force winds and I could hardly keep myself, let alone my camera, steady! Let's just pretend my night shots are "artistic' and that I meant for them to be a little blurry, shall we?

This area of Mykonos is also famous for its windmills-handily located on a bluff overlooking Little Venice.

These are also pretty, and "artistic" by night!

Take aways from this trip? Athens is eh. Mykonos is awesome. Awesomely awesome and you should all go.
Posted by Andrea at 05:50 No comments:

On our first day in Athens we went straight to the Acropolis. It seems that admission to virtually everything is included in the Acropolis ticket so I figured that was the place to go first. Unfortunately, since my guide book was written it seems that Greece has changed its mind about the month April and moved it from the Summer to the Winter season-which meant that everything closes at 3 pm. And of course we didn't get there until sometime after 4.

Instead we joined the Hop On Hop Off bus tour. I've never taken one before and it was actually pretty nice. Because of the open top we were able to see and get pictures of a pretty decent amount. I was hardly taking notes though so I don't  remember when any of these are.

Oh except for this church. I don't remember it's name, only that our British narrator said it had a 'dark history' which turned out to be a total tease. There was an attempted assassination of someone royal here. Attempted. That's a shadowy history at best man.

And there in the shadow of the Acropolis behind what was a Turkish mosque and is now a cultural museum are the remains of Hadrian's library. That guy has been everywhere. 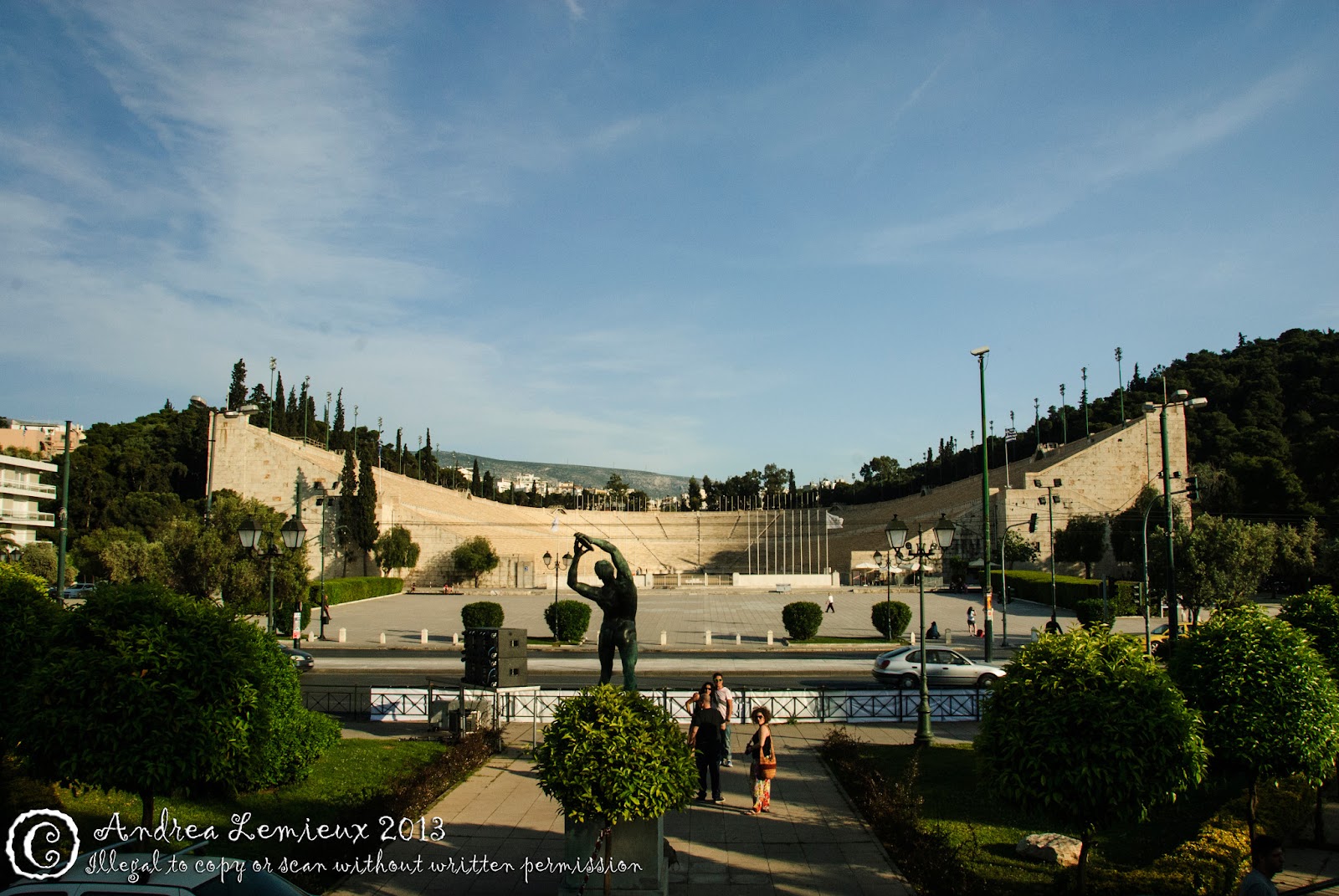 The Olympics! I'm not a fan and look forward to the end of Olympic commercials as I do election commercials but it was pretty cool. This stadium, which seats some 60-70 thousand, was built in 18something something when the Olympics were reinstated. It's a pity that, while they could reinstate the games and build this amazing stadium for it, that they had to insist everyone go clothed from then on. I might actually watch otherwise.

The tour also went to Piraeus and having been a fan of the Port of Piraeus restaurant on 21st and M NW I was pretty amused to be here.

We also stopped (technically on day two) at the Temple of Zeus.

We also had some mood music provided by this organ grinder. Who was sadly sans a monkey and lost a few cool points for it.

And for what is possibly even sadder than the Acropolis evoking memories of Kevin Sorbo...my favorite part of Greece...

The wine! Granted Greek wine, especially the house wine, isn't the best in the world but I'm at the point where I will happily kill for a glass of palatable anything that doesn't cost and arm and a leg. And at 5-8 Euro for 500ml (vs the same price for a glass of bad Turkish wine in Istanbul) I did myself a fair amount of drinking at each dinner :)
Posted by Andrea at 08:47 No comments: