Because KMac and I went to the Pre-Kentucky Derby party last week we had to move our opening night opera tickets to Thursday. This production of La Nozze di Figaro/Marriage of Figaro was possibly the best overall opera I have seen WNO put on in at least two seasons. It was stunningly cast which is not always, or rather ever, a given for WNO and all the principals not only had fantastic voices but could act.

Director Harry Silverstein set Marriage very classically which I appreciated. I am not partial to people who try to be "creative" because that usually fails dramatically. Silverstein set Marriage in what would have been almost 'contemporary' for Mozart. The dresses weren't paneled or bustled quite as much as they would have been in the 1770's but still it was well done.

The cast, which included Ildar Abdrazakov as Figaro; Veronica Cangemi as Susanna; powerful Victoria Livengood as Marcellina; Teddy Tahu Rhodes as Count Almaviva; amazingly controlled Virginia Tola as Countess Almaviva; Michele Losier as Cherubino; and the promising Emily Albrink as Barbarina. It took me a little while to warm up to Cangemi's Susanna. While well acted I thought her voice paled in comparison to the rest of the cast but I liked her much better by the end of the three hour and six minute production. The impressive resume's of everyone else in the cast and any acclaim accorded to them are well deserved.

I know it sounds kind of hokey to say but seeing this opera was like fulfilling some life-long goal. I grew up watching the 1984 film Amadeus and Marriage of Figaro is one of the most featured operas in the film. To finally actually see it was amazing for me. There were several moments during which I was completely in tears. One of them was towards the finale during the Ah tutti contenti which is the piece that kind of wraps up everything and during which everyone makes their peace with one another. It's stunning and as Salieri's character in Amadeus said, you really could hear the true sound of forgiveness in their voices. That teared me up but what really set me off was mezzo soprano Michele Losier's aria Voi que sapete earlier in the performance. My mother, who introduced my siblings and I to opera, is a mezzo and this is one of her pieces. I haven't heard her do it in years and had, in fact, forgot that it was even from this opera until I heard the opening strains. I cannot express in words why it had that affect on me other than to say that it was the somewhat overwhelming experience of momentarily reliving some of the very best parts of my childhood.

So long review not made any shorter...I would completely recommend that people see this opera before it's over. I think you can even get discount tickets still on Goldstar!
Posted by Andrea at 19:53 No comments:

Last week thanks to KMac and some of her friends I had the opportunity to go to the 29th annual Pre-Kentucky Derby Party. When KMac asked if I wanted to move our opera date and go to the party instead I thought, free booze? big hats? horses? Heck yes! I love hats. I just got a new one for Easter that would be excellent for the party. See, isn't it pretty? 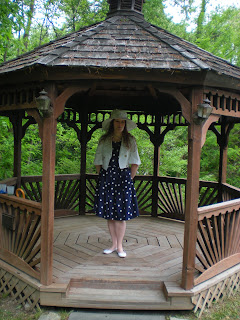 The party was at the Collingwood Estate in Virginia. Sadly it was pretty cold that day but the weather did not distract from the setting. 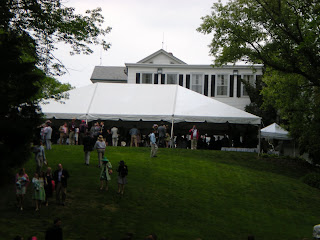 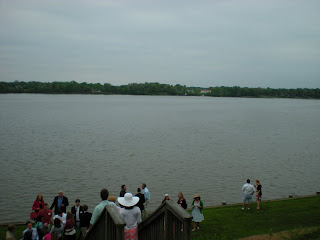 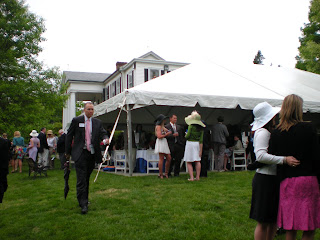 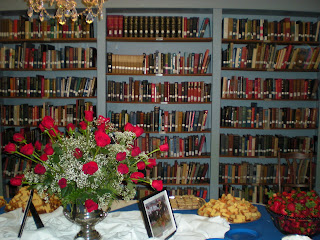 When we first arrived I saw this building that looked quite a lot like a stable and was excited that there might actually be horses. I love horses and was horse mad when I was younger. Actually I think I even faked sick once to get out of church so I could watch the Derby. 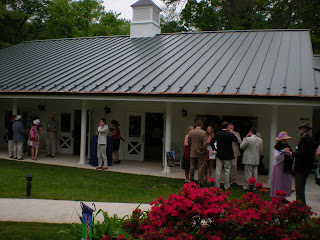 I was, however bound for disappointment as there were no horses in the building. It was where they kept the food. 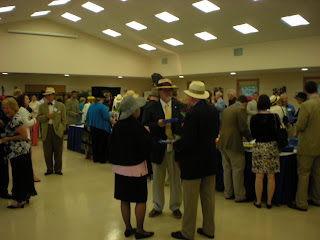 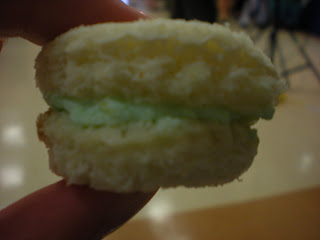 There were also mint juleps. What else would one serve at a derby party? 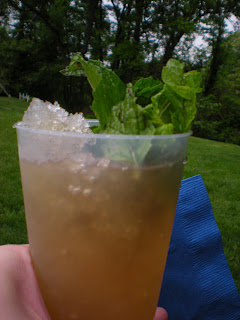 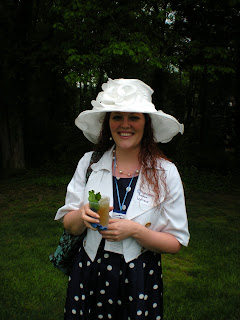 See here I am smiling with my mint julep. I don't like mint juleps. I know I look happy but I think that possibly that was before I'd actually taken a sip. Turns out I do not particularly care for bourbon. The strawberries were nicer than the bourbon. 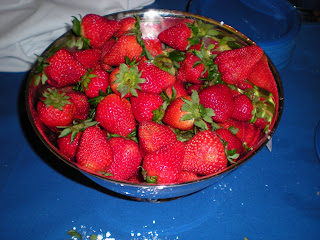 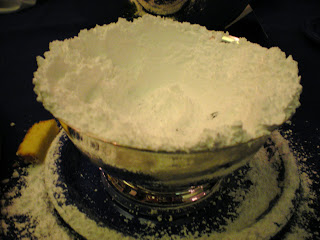 And yes that is a silver bowl full of powdered sugar.

It being a derby there were also hats. 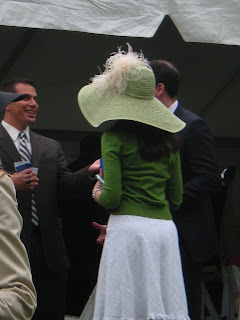 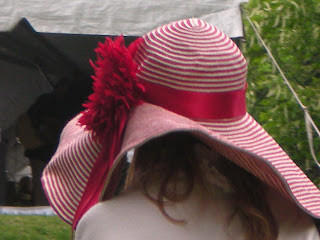 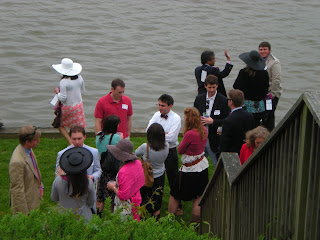 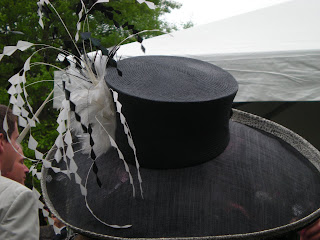 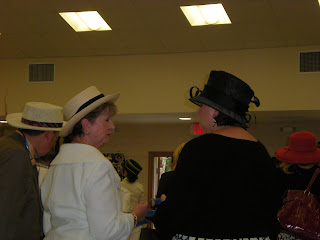 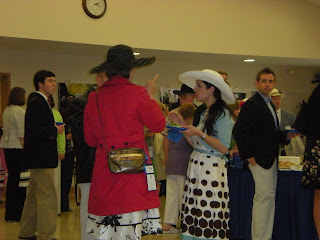 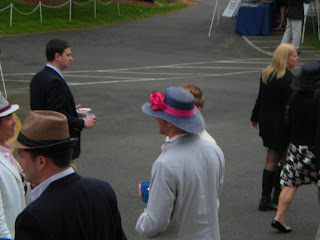 We assume that's his girlfriend's hat. There were also some interesting outfits. 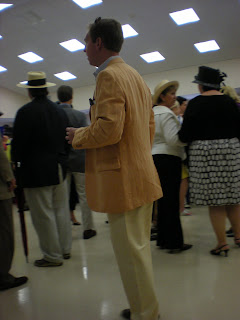 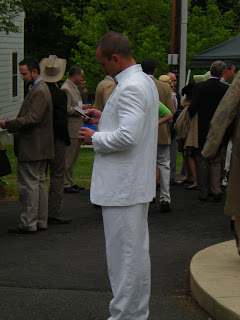 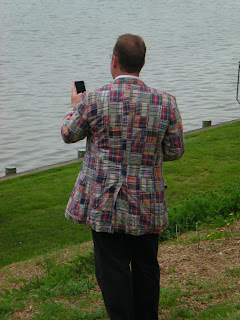 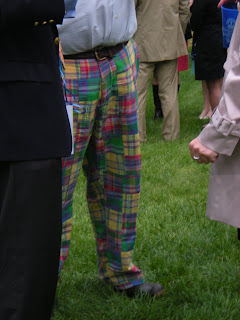 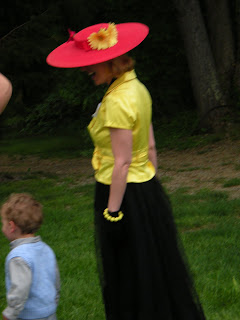 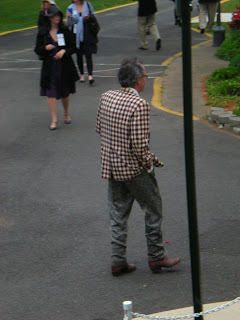 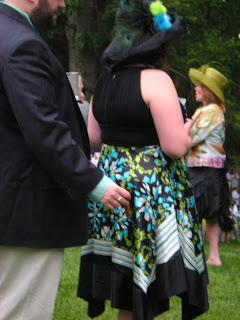 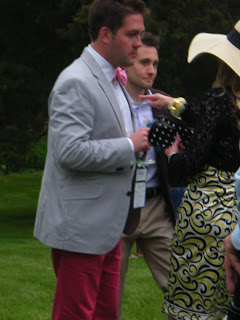 And the one that took the cake: 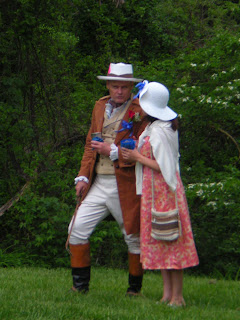 There's just no competing with that.

I really enjoyed how into it everyone was. As made obvious by the above, it wasn't just the ladies who were into it. Gentlemen were all dressed up as well in hats and outfits one wouldn't expect to see anywhere else. It was like a sea of seersucker. Everywhere you turned there was seersucker. It was really kind of awesome. We will attend again next year.