For our second joint post Lauren and I thought we would take the opportunity to list all the cities we've visited this year and, in a semi sort of resolution, all the cities we'd like to visit in 2013. This post we're even writing together sitting on my couch, watching hot guy movies while ringing in the new year. So here we go with 2012!

That's probably enough to be getting on with for now. We don't seem to have left ourselves anytime to actually work and earn money for these trips, but we'll certainly take suggestions as to where else we should visit!

So here's to a pretty darn good 2012 (at least travel-wise) and cheers to embarking on new adventures in 2013! Happy New Year from both of us :) 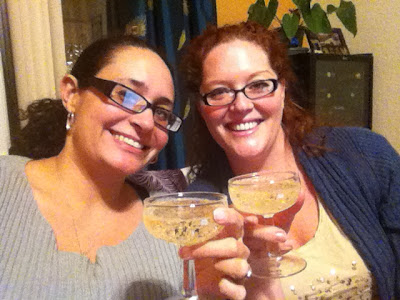 Life in Cairo: Food and Nightlife!

One of the best nights I had in Cairo was hanging out with my girlfriends in Zamalek. In addition to checking out the antique shop, and various other items in the area, I realized simultaneously that cupcakes are in fashion in Cairo, and I really missed fancy-pants cupcakes while in Iraq. Lo and behold there was Nola! Soft cake, creamy sweet frosting, and overall, delicious! 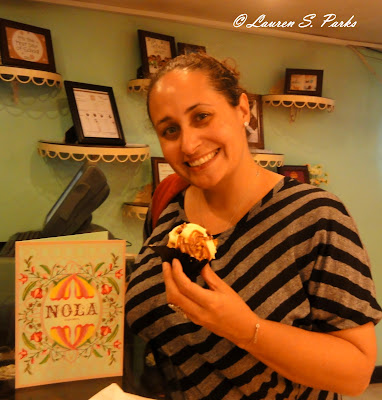 So one of my roommates went on and on and on about Naguib Mahfouz's Cairo Trilogy (Palace Walk, Palace of Desire, and Sugar Street), so we just had  to try the Naguib Mahfouz restaurant, Kasr Elshouk. 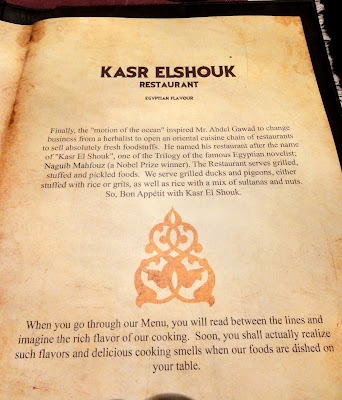 Having never read this trilogy on life in Cairo during the British Colonial occupation, but one mention of the word food, and I was game! I'm still not sure what the restaurant had to do with the books, but I'm guessing that some of these recipes featured prominently in the story. 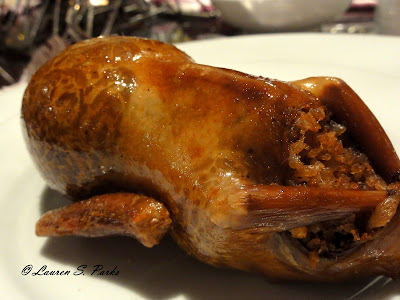 In addition to the traditional Egyptian Molokhyia and Khoshary dishes, there was stuffed pigeon (why did I order this?!), as well as a kind of scalloped potato recipe loaded with cheese and fried onions. With the addition of the spicy red sauce, it was fantastic. 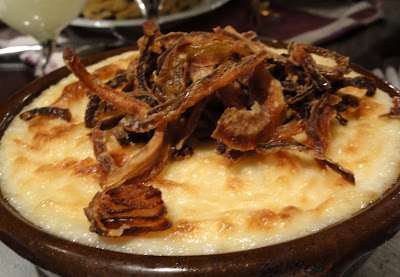 One thing I definitely liked was the decor of the place. I love the North African style of low couches and tables, the stone walls, and brass items all over the place. 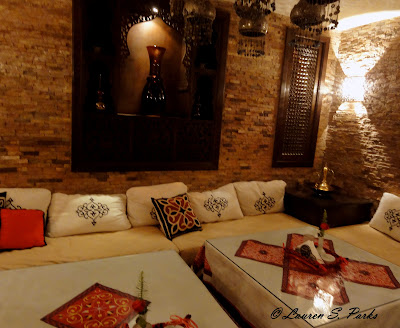 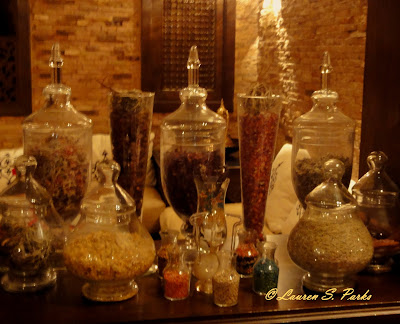 After dinner, we went for a cruise on the Nile. It was incredibly beautiful and much more peaceful on the water than you'd think Cairo would be. 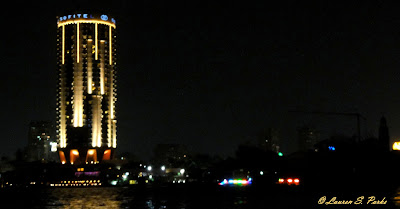 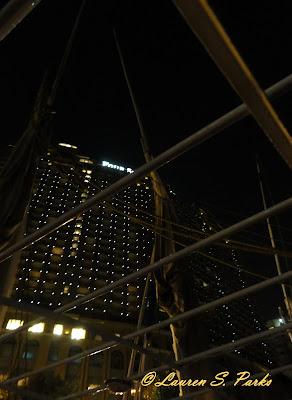 This was the same day that a series of protests rocked Cairo (and a large part of the Muslim world) because of that awful movie portraying a fictional account of the Prophet Muhammad.  As we approached the harbor that night, I caught a horrible whiff of teargas which was lingering in the air around the US Embassy. For some reason, it hit me particularly hard in our group (hello, asthma!), and though diluted, I couldn't stop coughing, crying, and wheezing. It was fantastic. I resorted to covering my face with my silk scarf just to keep the new pockets of gas in the air from getting to me. My flatmates thought it was hilarious. I would hate to be caught in a real cloud of teargas... 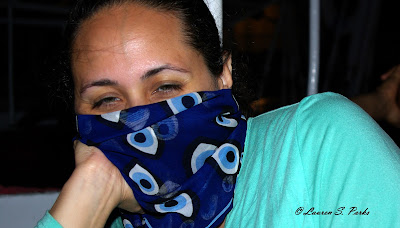 It was a lovely trip on the river though, in spite of the tear gas. There were many boats lit up traversing the water alongside us, many of them moving and grooving to loud Egyptian pop music. This one had loads of dazzling lights, and was whirling about in the water in every direction. We were on a sailboat, but for a moment, I kind of wanted to be on that boat, because it looked like they were having a blast!

Another night, we set out to have sushi. I heard about a great new place in Zamalek that serves authentic Japanese food, called Makino. Unfortunately, they were closed for no reason we could figure out. Luckily, my friend has tried every other sushi place in town, and took us to another good one, just within walking distance nearby. 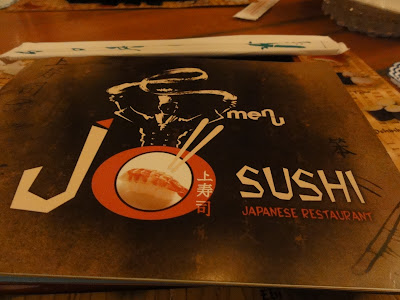 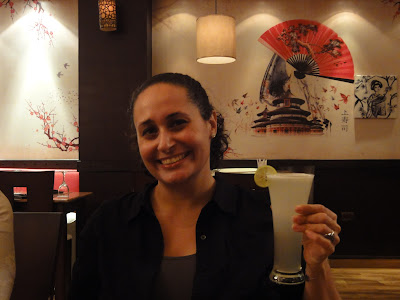 The service was pretty good, but I will always, always pick Egyptian fresh lemonade to drink. It's seriously the best! 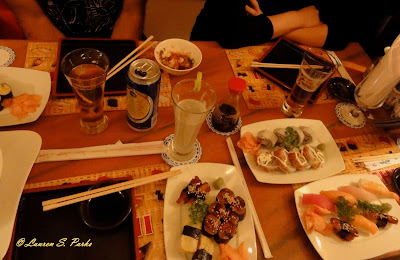 After a one-week tour of Upper Egypt (read: Southern), I met two of my longtime friends in Heliopolis where I was staying near the airport. I discovered that there was an authentic Mexican restaurant in the area that I definitely wanted to try. I explored the menu, and I have to agree, Maria's Mexican located in the Fairmont Hotel, is fantastic. 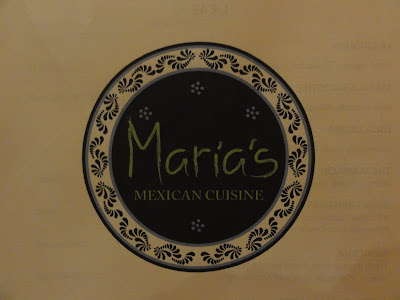 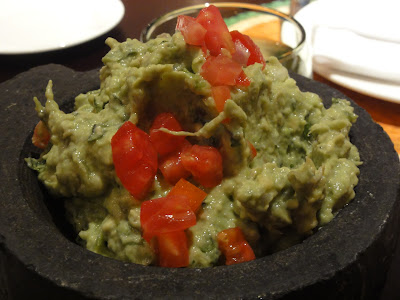 We opted to share an appetizer and some mains between the four of us, so that we could all have a bit of everything. The tableside guacamole was an excellent choice, and paired perfectly with the fresh, homemade tortilla chips. One of our favorites was the Pollo Estilo Maya, with rice, peppers and grilled pineapple. The service was fantastic, the food excellent, and I highly recommend the fresh juices. 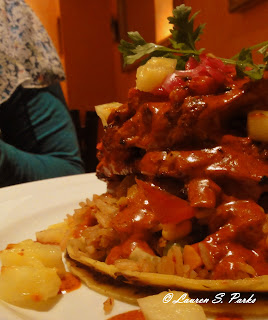 Life in Cairo: The Arts

On one particularly enjoyable day, two fo my flatmates and I went into downtown Cairo to visit the Gezira Center for Modern Art. Talk about a lovely respite from the hustle and bustle that is Cairo! Once you pass through a metal detector (I'm pretty sure it wasn't even working), you're basically smacked in the face with how quiet it is on the grounds. Also nearby is the Cairo Opera, and it's the perfect park setting for studying, enjoying ths sunshine, various sculptures, and a quiet meeting with friends over tea. 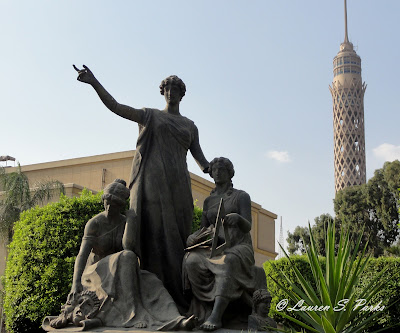 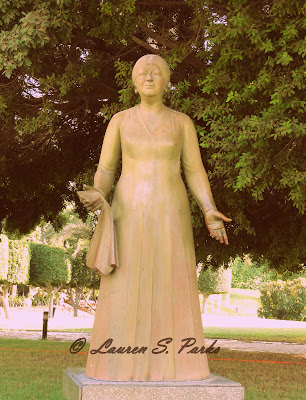 This is a statue of the "Star of the East," Egypt's most famous classical Arabic singer, Oum Kalthoum. Her career spanned from the 1930s until her death in 1975. 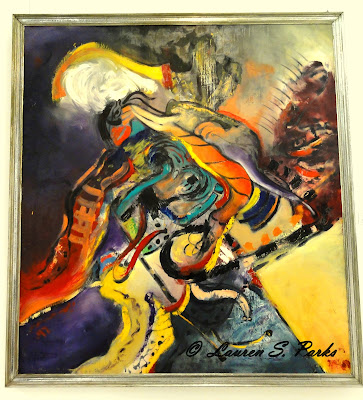 On another evening, my roommates and I got together in the Zamalek neighborhood of Cairo and did a bit of exploring. We found a fantastic antique shop called the Loft, which was full of interesting bits and bobs. 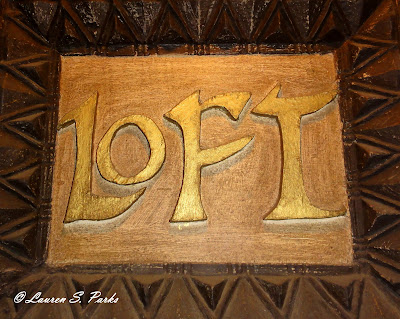 This cat was a really doozy, let me tell you. She was the guardian of the shop, and I swear she might have been a familiar or an anamagus or something. Look at the attitude! When I tried to pet her, she swatted at me!

On one night, the flatmates and I decided to check out the free Sufi dance show. It takes place in an old inn called Wekala Sultan Al Gouri. It started out simply, just musicians, and a single artist playing zils. 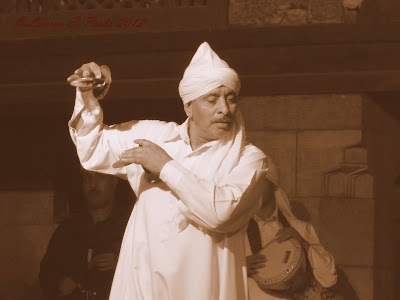 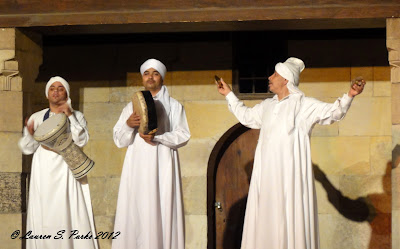 Then, the music grew, and the dancing got more and more involved and passionate. 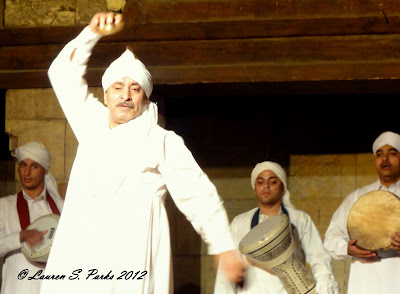 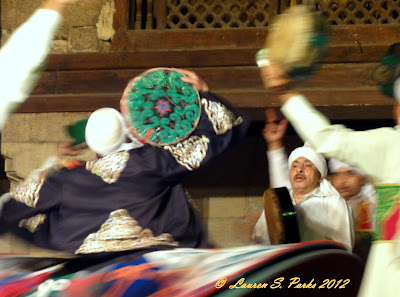 Then, there were splashes of color, and the music and dancing were so amazing, you can't help but wonder just how they do it! 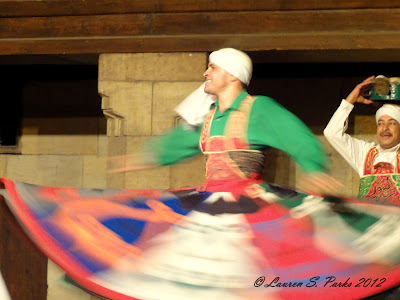 The colors continue to spin, whirl, and change color, and the music follows. Then, even more magic happens! 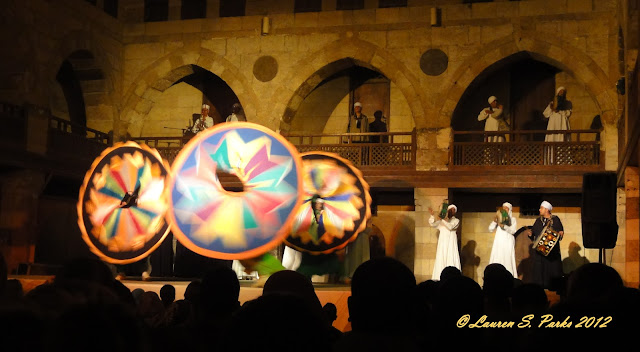 And here we are at the finale! All the musicians playing, all of the dancers spinning as fast as they can in time to the music, all while twirling bits of their costumes in front of, behind, and over themselves and each other!

If you're ever in Cairo, I definitely recommend that you check out this show. And why wouldn't you? It's totally free! Just do one better than I did, and bring a real camera if you can!

On one particularly beautiful day, my roommates and I headed out for a walk in the area of Cairo around Al-Azhar Mosque. We'd already been into the depths of Khal el-Khalili souk, so we decided to walk around in other directions to see what there was to see. This was one of our last weekends together in Egypt, as one of our number already moved into her student room on the other side of town, I was leaving the next day for my organized tour of Upper Egypt, and the others only had a week left on their studies as well. Here are some highlights from our walkabout that day:


We covered quite a bit of ground this day, and all of us were marveling at just how beautiful Cairo really was (it is!). Though we'd all had our own negative experiences during our time there, those were no match for the stunning beauty, architecture, and hospitality that we all experienced from most people that we met. I was so lucky to have friends already living in Cairo, so the city actually triply blessed me with good fortune. 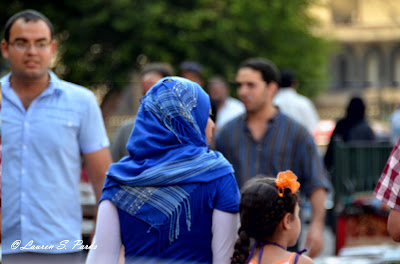 As we continued our walk, we discovered another, hidden neighborhood, and decided to walk through it. I love doing this when I travel, because you never know what kind of gems you're going to find!

It was so hot in Cairo when I was there, and the humidity, compared to Baghdad was nearly unbearable for me. I found a lot of refreshment in the various drinks sold in the juice shops in and around Cairo. The boy in this neighborhood was selling three different drinks to refresh passers by in the narrow passage ways where he'd set up his cart: Tamarhindi (tamarind juice) or Erk Sous (licorice), Sobieh (coconut milk juice), and/or Sugarcane juice. these are so delicious on a hot summer day (yes, even in September it's still summertime!). Though, I prefer, just as a precaution to buy my fresh juices from shops. Not that that always protects you from stomach bugs, but I've got to at least try. I pretty much am guaranteed to get sick eating food from street carts! 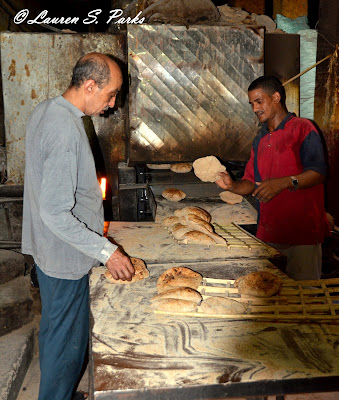 This breadmaker invited us into his shop to have a look at his bread. In Egyptian, bread is called, aieesh. There are three kinds - Shammie, which is basically just like any old white flour pita (though not to be underestimated, because YUM!), aieesh balady, or the bread of the people, and aieesh makamar, which is darker and crispy for making Fatta. The word for bread (in the Egyptian dialect), I think even gives a clue to just how important it is for living, because I think, Aieesh is also the word Egyptians use for "life." 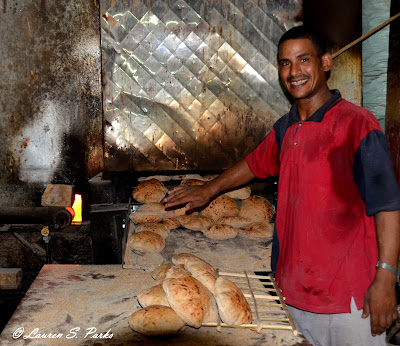 When I asked if I could take a picture, he ushered us into his steaming hot bakery to show us how the bread was made. You can't imagine the amazing smell coming out of this shop! In the back were a couple of old men, and some young boys mixing the dough and preparing it for the roller and the ovens. 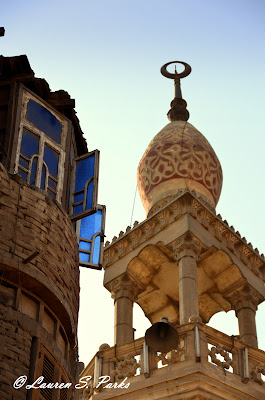 And now I leave you with a last image from our walk this day. Another stunningly beautiful mosque on the skyline. This one, in particular caught my eye, just because of the blue windows next to it.

I've still got a lot of ground to cover on my five weeks spent in Egypt. So, what next, dear 5 people who read this blog? Shall we head to Upper Egypt, or do you want some more on Cairo first? I promise I'll be more timely about posting these!