Yes. I will retire here. When I get a different job that pays real money that is. It's hard to retire well on a saving the world paycheck.

Transportation on the islands is a completely different story. While it seems official vehicles are allowed, all other transportation is limited to bicycle and horse drawn carriages. In addition to nearly being run down by a couple of the carriages, we encountered several horses just kind of hanging around. If you saw the ParMieux Adventures Facebook page then you might have seen some of the teaser pictures I put up; including one of a horse wandering through the trees. And if you didn't see our Facebook page, look us up and like us! I just can't resist fun filters in Photoshop so I took the horse picture and did this:

I was a little tempted to add a horn but managed to restrain myself.


Other than avoid getting run down by inconsiderate and inexperienced bicyclists and carriages, there's not a lot else to do except eat fish and wander around and steep in jealousy over the gorgeous houses. We did a lot of that!

White seemed to be the theme but there were a few houses that were of more interesting color schemes.

This is really the perfect place to live. You get water, hills, and forest. Granted you have to put up with annoying tourists but, if I owned one of these houses, I'd be insulted if people weren't taking pictures of my place!

There was even something rather romantic about some of the more run down places.

And of course once you got over house envy (if you could!) then you had to contend with view envy.

We couldn't resist all the pretty flowers and my friend Elisa put some of the mini daisies in my hair.

I can't believe there's a picture of me I don't totally hate!

And like Istanbul proper there are plenty of friendly cats hanging around to pet and play with! This guy liked to bite and gnaw at my hand the way my own cat does.


And once again because I cannot resist color effects:

I have to admit that there is more than fish to eat. There's also ice cream and donuts!

I've not had lokman yet so I really wanted to try these. I wasn't quite sure what to expect other than 'donut'. Wow. Yum. Yum yum yum. They're like donuts, but donuts that have been deep fried in honey then sprinkled with cinnamon.

Despite eating an order of lokman, a small one in my defense, we had to have ice cream. When it's 25+ C, sunny, and you've spent two hours walking up and down hills a person darn well deserves ice cream!

We met this couple visiting from Connecticut and he was fascinated with my ice cream choices; walnut, lemon, and chocolate.It was deserving of his fascination; it was delicious. Especially the lemon. I'm not a huge fan or sorbets so when I can find a lemon ice cream I am absolutely thrilled.
Posted by Andrea at 10:40 No comments:

And this is how exciting my life is now; that I'm thrilled to bits when I can have a mini conversation with a waiter about whether or not the Urfa kebap is any good or not. And to recap, he said it was good so I ordered it and after I ate he asked if I liked or not; to which I replied that I did but in my opinion the Adana kebap is tastier.


So speaking of food! I managed another semi successful Turkish recipe; the all important (red) lentil soup. I have become rather enamored of the various lentil soups here. I knew I liked Indian lentils so I guess it's not such a stretch that I should like them in Turkey.


I feel like going into this recipe I was already set up to at least partially fail. Although I feel that I used this as an opportunity to demonstrate my flexibility and creativity. For example, I still have only the one pot and since the onion, potatoes, and carrots were occupying it I had to find a different way to soak the lentils.


That worked out alright though so yay me. What didn't work out alright was actually using as much water as the recipe called for. So I tried (and failed) to pour off some of the water. It worked for about half a minutes before an extremely hot pot coupled with a lack of pot holders caused the lid to slip off the pot. I lost about half the ingredients into the sink.

In the end though what I did save was pretty tasty. While I also have no blender I got a bit of a workout whisking the soup for everything I was worth. It wasn't perfect and the end result was a bit of a chunky soup, not the smooth experience it's supposed to be, but it still tasted pretty fine. 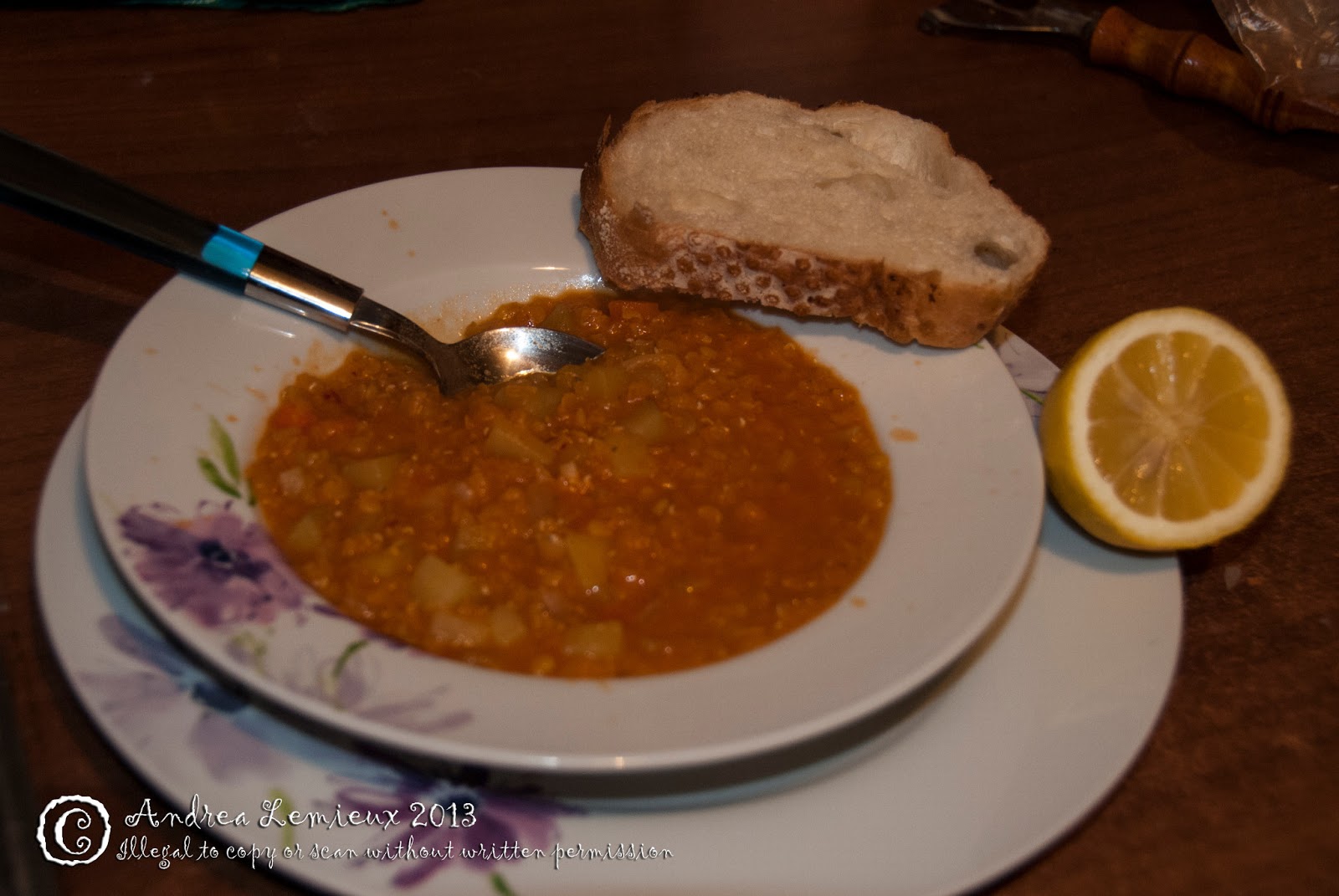 Saute the onion in a sauce pan with half the oil. When the onion softens, add the rest of the oil with the potatoes and carrots. Once those are softened (3-5 min), add the water, lentils, and tomato paste. And a lot of salt. I swear the salt here just isn't very salty. Bring to boil and let simmer until all the vegetables are soft.

If you have a standing or immersion blender, go for it. If you're like me and you don't have those, whisk as best you can. Serve the soup with a lemon wedge. I know, it seemed weird to me at first but trust me; it's good.

Granted yesterday's post wasn't very inspiring. Frankly I'm a little disappointed with myself. Hopefully the rest of my Rabat pictures will make up for it though!

My hotel was in a great location, at the corner of the souk and right on a river that comes out of the Atlantic. So looking out my window this is was I saw:

The first full day in Rabat was sunny and beautiful which was a welcome change from the overcast, rainy, and cold weather I left behind in Istanbul. So we made sure to take advantage of the weather and walked around the city enjoying the water and some of the older, walled in sections of Rabat. 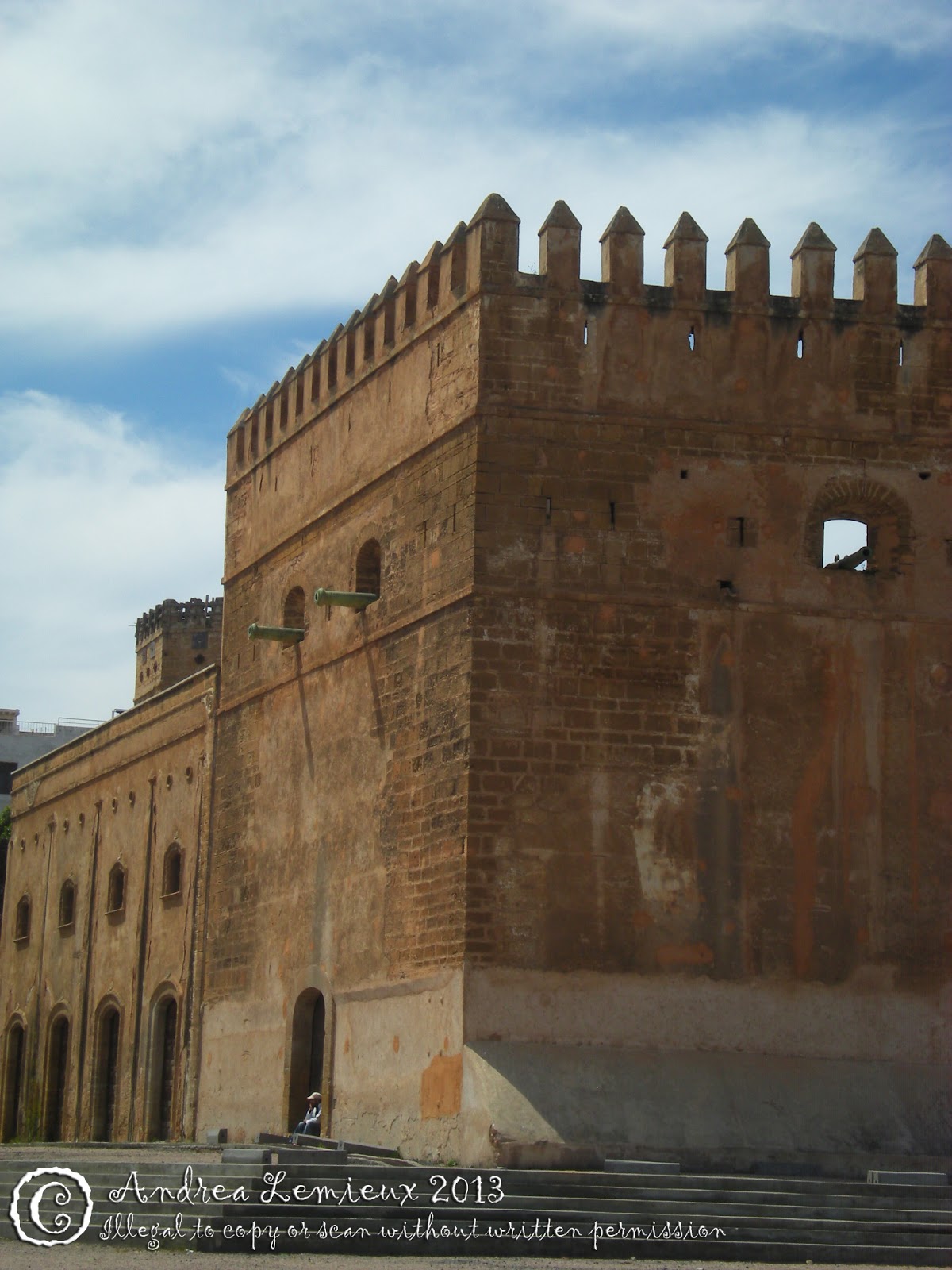 Subsequent days were sadly not as pleasant as the weather turned overcast, rainy, and cold. But we persevered and explored during our free time anyway! And while Francois Hollande had the poor grace to be in town and bar us lowly regular people from the Mausoleum of Mohammad V, we were able to go back another (equally overcast) day to see it.

It's no Taj Mahal but it's also nothing to sneeze at. Also, that is a ridiculous expression.


Inside the mausoleum was quite impressive though. I particularly liked the domed ceiling.

And despite their rather stern demeanor the guards were quite friendly and chatty and willing to pose for pictures.

We also paid a visit to to one of the walled off older sections of the city.

I felt like I was back in Tunisia! I think there should be more blue and white cities. How could a person not want to live in one? This place was particularly peaceful as we couldn't hear any of the traffic or noise from the city outside.

Our last day we visited the Atlantic and found that an interesting group of people had already laid claim to the choicest of ocean front property.

A cemetery on the beach? Yup. As far as we could see stretched cemeteries. They saw that you can't take it with you; apparently these folks and their great view disagree,

It was very windy and the ocean was very turbulent. That did not stop us or others from braving a soaking to walk along the pier that extended out into the ocean though. And while we were as salt encrusted as a good tuna when we got off the beach we did manage to avoid any serious soaking.

The weather also didn't stop the few people on the beach learning how to kite surf, a couple surfers insane enough to brave being smashed against the pier, and the football game happening on the beach. I did however resist the urge to take off my shoes and socks and wade in the water.

Is Rabat an exciting city? No. Not at all. Can you find things to do, eat, and buy while you're there? You bet. So while I get to check Morocco off my list, Marrakesh is still on it!