I Am My Own Damn Hero

Of the couple different ice creams I've already made this summer, I think my favorite so far is the goat cheese ice cream I made for Lauren's birthday. Lauren and I choose words for birthdays and Christmas and buy gifts based on that word. Her word this year was 'twist' so I thought it would be fun to take that to the birthday dessert as well.

As much as I prefer custard based ice creams they are a pain in the summer, on a gas stove. I'm also not good at being patient about slooowly bringing the custard to a simmer and I always end up with bits of cooked egg in the custard. I don't have a strainer so usually I just decide to not care. This time I decided to use what I had on hand a poured the custard through a straining spoon.


The custard on it's own was, upon first taste, utterly bizarre. But I had to taste it again. And  again. It was weird and addictive and weirdly addictive. It kind of tasted like cheese cake, but goaty. In a good way. So in order to both temper the strong goat flavor and tie in the season, I topped the ice cream with limoncello soaked strawberries.

Whisk egg yolks and sugar until creamy/frothy. Over medium heat, bring the milk to a boil. Remove from heat and whisk a small amount of milk into the egg mixture. Once that's tempered, add the egg mixture to the milk and thicken custard while stirring constantly. Pour hot custard through a strainer over crumbled goat cheese and stir until completely incorporated. Cool the custard thoroughly (I let it sit in the fridge overnight) and freeze per the ice cream maker directions.

Goat cheese; ice cream; summer fruit; limoncello...how could this not be just about the awesomest thing ever?
Posted by Andrea at 11:23 No comments:

Even though it's 3,000 degrees in DC and turning on my gas oven increases the temperature in my non air conditioned apartment by another 1,000 degrees I had to make this recipe again. It's super simple, really tasty, and very summer appropriate.

Fresh summer vegetables are some of my favorite things. They almost make the 3,000 degree heat worth it (Okay so maybe it was only 105 F but come on! That plus the humidity and I was not a happy camper). Plus one of the great things about this recipe is it's versatility; you can use any vegetables you like. I settled on summer squash, red onion, asparagus, and sun dried tomatoes.

Between the chopping and roasting and boiling I was trying to stay as cool as possible, which meant dragging my large fan from the living room to the kitchen whenever I had to be in there.


The luscious smells emanating from the kitchen were what got me to push over and over through the wet wall of heat that seemed to block the entrance to my kitchen. At least I didn't have to go in all that often. For a recipe that has such a nice complex flavor, it's remarkably easy to make. As soon as the vegetables were roasting in the oven I started boiling the chicken stock for the orzo; then added the orzo to the stock when I went back to stir the vegetables. 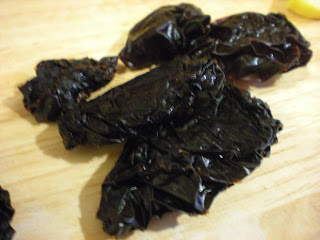 For me it's the extras to the recipe that make it so fantastic. I used three different oils on the vegetables: a regular Spanish olive oil, roasted garlic olive oil, white truffle oil. Also, instead of adding mushrooms to the vegetable mix (the original recipe I found called for portabellos), I used wild porcini mushroom sea salt. In fact that's what inspired the entire recipe. I've had this salt for a while and could never quite figure out what to do with it; but it adds a fantastic smokey flavor to this recipe.

So my recipe isn't exactly exact...it's kind of a to your taste type of thing:

Chop all the veg and coat with olive oil and salt and black pepper to taste. Roast at 375 for 10-12 minutes, stir around a little, then roast for another 12-15.

For the orzo I used chicken stock. Not really necessary, water would do, but I feel that the stock adds a bit of richness. I also put some chopped garlic in the stock because I just really like garlic. Bring stock to boil and cook pasta. If you've never used orzo before be mindful that it plumps up a good deal so it's okay to use a little more stock than you might think you need. I let it summer until most of the liquid is gone so that I don't have to strain it.

Once the orzo and the vegetables are done, combine in a large bowl and add a little more spice to taste. The first time I made this I also roasted pine nuts...but then when I looked for them for this round and saw how expensive they are (holy cow!) I substitute dry roasted sun flower seeds which worked just as well. Top it all off with some grated hard Italian cheese (I used romano but a pecorino or parmesan would work just as well), and voila!
Because it was so very hot I skipped the usual cup of coffee or wine I drink while cooking and instead made some Guarapincoco. One of my girl friends and I discovered Guarapincoco while having brunch at Cuba Libre in Chinatown. You should definitely go to Cuba Libre; the unlimited brunch deal was fantastic. The food and service were wonderful, portions quite generous, atmosphere is fun...I kind of thought I might die when we left though because we had to try everything. The Guarapincoco, which you'll find under the Aqua Frescas on the menu, was one of the best things we had though so I knew I was going to have to recreate it at home. 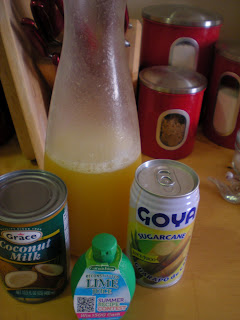 My recipe for this is also not exact. Despite some Internet searching we couldn't find a recipe so I just started mixing and stopped when it tasted good!

I used the entire can of sugar cane juice and about 3/4 of a can of pineapple juice. I'm sure you could use the entire pineapple juice; I just used what I had on hand. Coconut milk you don't need much of, maybe 1/3 to 1/2 the can. What you're looking for is for it to make the drink slightly creamy and to give it a pale, milky yellow color. The lime juice I added last. If you stop before the lime juice then you basically have a super sweet pina colada. The lime juice really tempered the pina coladay flavor.

This is totally my new summer drink.

Thanks to my recent trip to Mexico I've become mildly obsessed with making quesadillas. I love quesadillas and so I'm not sure why I've never bothered to make them at home. They're super simple and you can put pretty much anything you want in them so why wouldn't I be making these all the time?

I started simple with whatever was in the refrigerator...which for me was left over romano and extra sharp white cheddar cheeses, red onions, and chicken.

First start with a lot of butter. With all the cheese there's no way this is going to be healthy anyway so why bother to cut back on the butter? 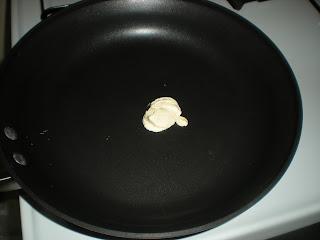 Once the butter is all melty add the onions and keep the heat medium to low. I always start my onions first to give them plenty of time to slowly cook down and caramelize a little. 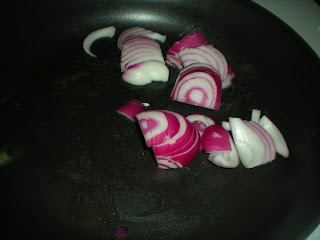 Next...spices for the chicken!! I went simple and pulled out the kosher salt, black pepper, garlic, cayanne, crushed red pepper, and thyme. Not sure why the thyme really but it was there on my spice shelf looking all neglected. 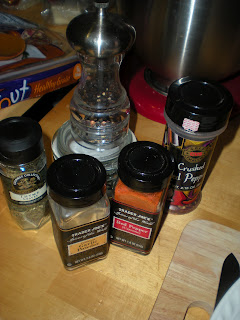 I seasoned both sides of the chicken and put the fillets under the broiler for about five minutes per side. 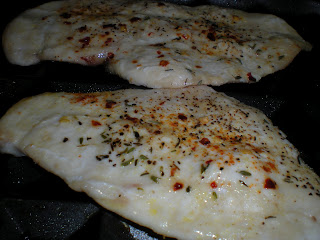 While they were broiling I got to work slicing the cheddar and grating the romano. Lots and lots of romano. 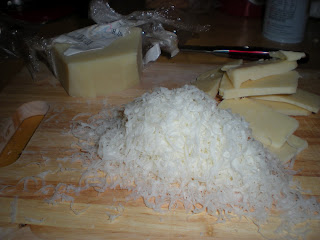 Then I got hungry and impatient and this is about as brown as I let the onions gets. 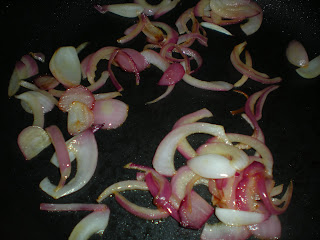 Little more butter in the pan and tortilla number one went down. Then I laid on the cheddar, the romano , the onions, and the chicken I'd sliced. On top of that went a little more romano and the second tortilla. 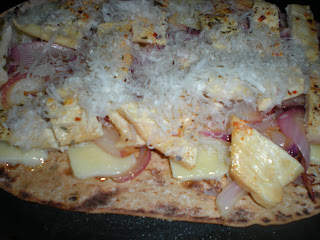 I covered the pan to help the cheese melt and waited 5-7 minutes before flipping it over. The flipping was kind of a mess and I lost some of the goodness in the flip so I did some emergency reconstruction. It turned out ok though. After letting it cook another 5-ish minutes I slipped it out of the pan, cut in quarters, and finished it off with some chipotle mayo. 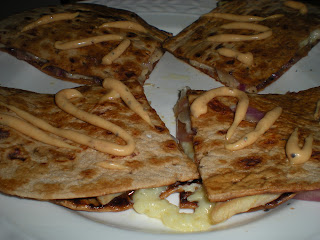 And this is pretty much what I've been eating for the last two weeks :)
Posted by Andrea at 12:05 No comments: