Two of the sites which help define Xi'an are the Bell and Drum Towers set fairly centrally within the city walls. Built in 1384 and 1380 (respectively) during the Ming Dynasty, the towers are about 40 meters tall and were used to tell the times of day. At dawn the bells would be struck and at sundown the drums would beat.

Now the towers house museums displaying bells and drums, other musical instruments from the Ming and Tang dynasties, textiles, and weapons. There are also (big surprise) over prices gift shops. One of the cool things about getting around in Xi'an are the subways. Not subways as in a metro train, but walkways underground to help pedestrians negotiate the city without worrying about dying in the insane traffic. These subways are lines with shops and separate pathways lead to each of the towers, making them easy to visit.

Seveal times every day there are performances at each tower. The bell tower features a number of different instruments as well as the bells and a dancer.

And the drum tower has a drum performance.

Like many of the buildings in Xi'an, the towers are also very pretty at night. 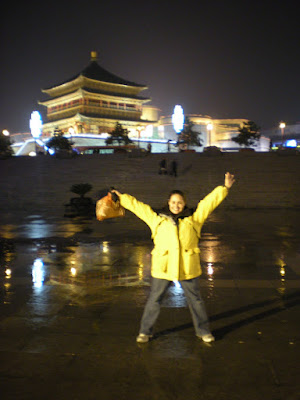 Xi'an - Where the Food is At

One of my biggest general disappointments about China was the marked lack of street food. I know that Taiwan isn’t China (heck, I’m super opposed to those politics and am all about a free and independent Taiwan) but I practically lived off street food there so I was expecting something in China. In Beijing I gather that there is a food street that’s all street food and carts-but we never managed to drag ourselves out there. Harbin there was just that awesome lady with the cotton candy, and in Shanghai we didn’t find anything either. Xi’an however, was a goldmine! Not just for street food but for food in general.

Xi’an is famous for its dumplings. I “heart” dumplings. We went to one of Xi’an’s more famous dumpling restaurants for an 18 course dumpling feast. It started with appetizers which we were some veg and what we were pretty sure was meat.

The we got small bowls of soup 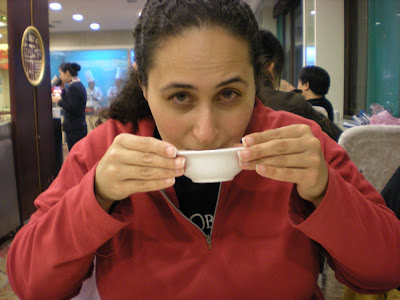 Then came the parade of dumplings. 18 courses sounds like a lot but there were only two of each kind of dumpling so it wasn’t necessarily the most filling feast I’ve ever had.

There were all kinds of dumplings. The first picture is of sweet flaky dumplings (served cold) that had maybe and apricot filling? Very yummy. Almost all the rest very savory dumplings of one kind or another with pork, shrimp, chicken, egg, vegetable fillings that were curried, spicy, bland…a whole spectrum of taste. Some were fantabulous. Others were kind of yucky. My absolute favorites were another sweet dumpling. The dough was brown and they were shaped to resemble walnuts and filled with a sweet walnut paste. After our feast we ordered extra of the walnut dumplings. Apparently they come two different ways…steamed and baked. They were ever so much better steamed.

After the dumplings came yet another soup with teeny tiny little dumplings. The soup was not good. I have no clue what was going on with the broth but…ew.

We also hit the mother load of killer street food in, of all places, the Muslim Quarter of Xi’an. If you ever get a chance to visit Xi’an the Muslim market is a must visit. Very centrally located in the city near the bell tower, the Muslim Quarter covers several blocks of the city and is full of twisty turny allies, street carts full of food and goods, and shops. It was one of the most fun places we visited.

This is a sticky, sweet rice pudding-type dessert that they put together and stick on long toothpicks. Yummy.

Dried fruits. Not all of which were identifyable.

Meat on a stick is always a wonderful thing. The real treat here was the bread which was coated in some spice mix then quickly fired on a skillet. We ate a lot of the bread.

Yet more meat. Meat just sits around outside all day long.

Eggs. Maybe? We didn't eat these. Probably wise on our part.

There were also these glorious sweet potato patty thngs (of which we sadly have no pictures). We have no idea what was inside the patty. There looked to be about a dozen flavor varieties of which I could only identify two...but they all tasted the same. Which wasn't necessarily a bad a thing since they inside tasted like a mix of walnuts, brown sugar and butter. Also awesomely delicious were these, I guess like a donut on a stick. They came three to a stick, were a shell of crispy sweet fried dough and on the inside were fruit compotes and what I'm pretty sure was more walnut/sugar/buttery goodness.

One section of the market was a long covered alley full of only goods shops: scrolls, carvings, clothes, textiles, statues, games, trinkets, jewelry, luggage, toys, ornaments, kitsch…you name it, it was there. Just about the only thing that the Frommer’s guide got right was their description of the place calling shopping in that section a blood sport with you as the prey. Every step we took was dogged by a vendor yelling to us to buy this or that. The great part was that bargaining here was so easy because if vendor A wouldn’t give you a good price then vendor B across the way would!

After we took the 8 hour train back to Beijing we had to stay another night in our hostel there before continuing on to Xi’An. We got up early that morning to make another attempt at buying train tickets. I found buying the tickets to Harbin slightly traumatic. The line was ridiculously long and people don’t queue well so it was hard to decide what constituted being in the line and what didn’t, at one point there was an announcement and the window closed followed by another opening a few minutes later. A lot of people got annoyed and left at that point but, with my luxury of having no idea what was going on I stayed in the queue and actually managed to jump up a bit in the confusion. I had no idea what was so special about this line (it was the Window for Foreigners) or why I was the only white person in the line. And why it even was the window for foreigners when the ticket agent only spoke Chinese. Sigh. Anyhoo, this second time around was ever so much easier. The line at the window was only a couple people deep and I once again managed to buy the tickets we needed using my limited Chinese. I even managed to ask for a soft sleeper car.

That evening we had to go to one of Beijing’s three other train stations. I have never, ever been in a train station that large. It was easily twice the size of DC’s Washington National airport. We boarded our train which was actually headed for Lhasa and managed to squeeze our bags into the tiny train compartment which we shared with a very nice couple from Beijing. The trip was pretty uneventful. Our train didn’t leave until 9:30pm so we went right to sleep.

Once in Xi’an we decided after much deliberation to trust the English speaking guy who wanted to be our driver. Turns out that was the right choice. He ended up not only being very trustworthy and giving us a good deal on being our driver for the day, he took us to a couple cool places we would have otherwise missed.

Our driver first took us to the Banpo village excavation site/museum. The entire way there we thought he was taking us to a bamboo village and so had a moment of “ahhh” when we got there. First discovered in 1953, Banpo contains the remains of several well organised Neolithic settlements dating from approximately 4500 BC. It is a large area of surrounded by a ditch with circular houses built of mud and wood with overhanging thatched roofs. The building they built over the site was pretty cool-lots of big open space showing the excavation with smaller rooms set aside for specific exhibitions. And we had it all to ourselves.

I was less interested in the pots and village models

and far more interested in the communal burial sites and skeletons

Lauren and I had fun pretending that we were Booth and Bones trying to figure out COD (that would be cause of death to those of you who are not, but should be watching Bones).

After Banpo it was off to a factory that made a variety of things including shadow puppets, porceline figurines, laquer furniture, and…all sized models of the Terracotta Warriors. I didn’t take any pics there but these are from Lauren’s collection.

After shopping at the factory it was finally on to the site of all sites in Xi’An…the Terracotta Army. Dating to 210 BC, the army was built for the tomb of the Emperor Qin so he could continue to fight wars in the afterlife. While endless dynasties have ruled on the Chinese continent, Qin Shi Huang was the first emperor of China. He conquered the princes and kings to unify the country, established one single writing system, built standard roads, and began the Great Wall. He is an emperor of legend and is featured in movies, including Jet Li’s Hero and Chen Kaige’s The Emperor and the Assassin (which is long but a great film). The Army figures vary in height (183–195cm - 6ft–6ft 5in), according to their role, the tallest being the generals. The figures include warriors, chariots, horses, officials, acrobats, strongmen, and musicians. Current estimates are that in the three pits containing the Terracotta Army there were over 8,000 soldiers, 130 chariots with 520 horses and 150 cavalry horses, the majority of which are still buried in the pits. Their bodies were mass produced using wax molds…but each face is individual. Every single man in Qin’s army had to sit for an artist to have his likeness taken, which was then carved into a mold and placed atop the prepared body.

The complex is huge and had it not been cold, grey, and raining, we could have explored more.

Instead we headed straight to the pits (which took us a while to find) to see the main attraction. Our pictures turned out kind of crap though. The high, curved ceilings of the pits are almost completely skylights and that is the majority of the light in each building. On such a cloudy and rainy day as we had it meant that the light was very low and camera flashes were useless.

Despite the disappointment of bad pictures, it was truly an awe inspiring experience. Despite the dozens upon dozens of visitors an almost eerie silence prevailed through the pits as people took in the sight of one man’s devotion to immortality. 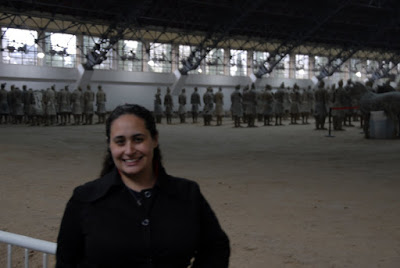