Before I leave Prague posts behind I wanted to put up a few pictures of Prague by night. 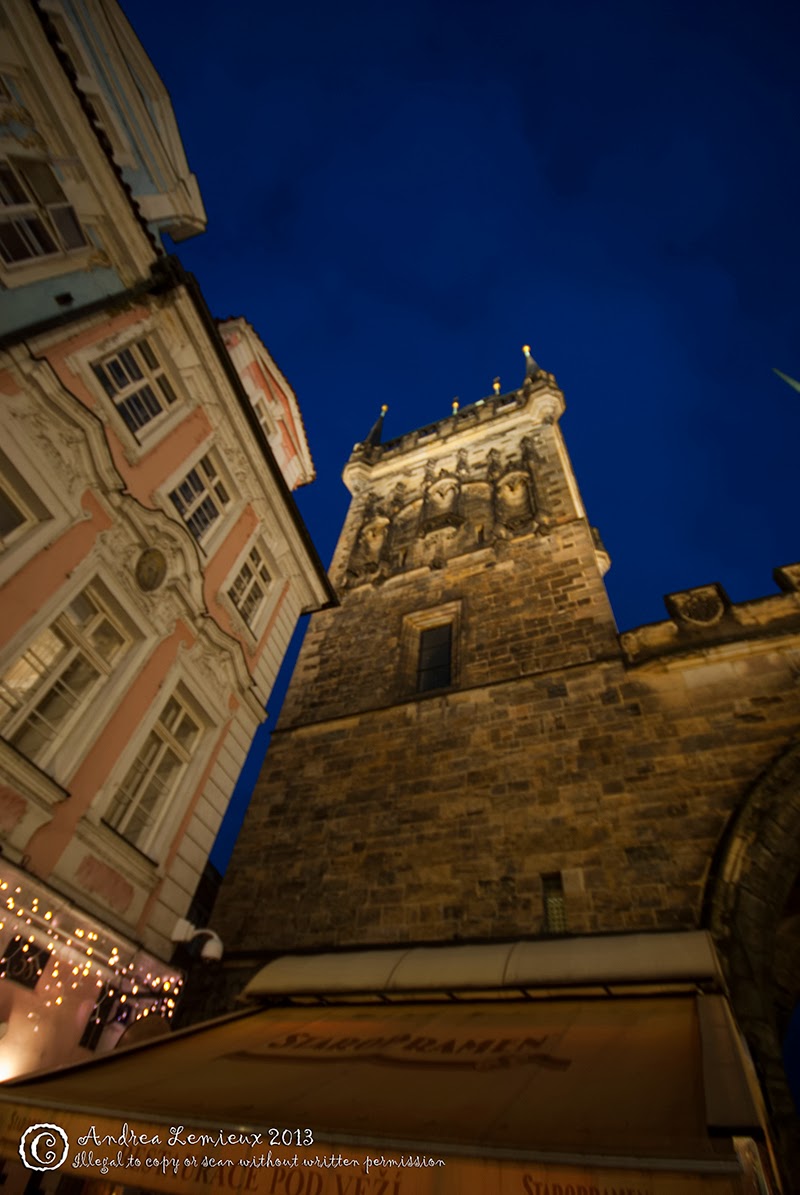 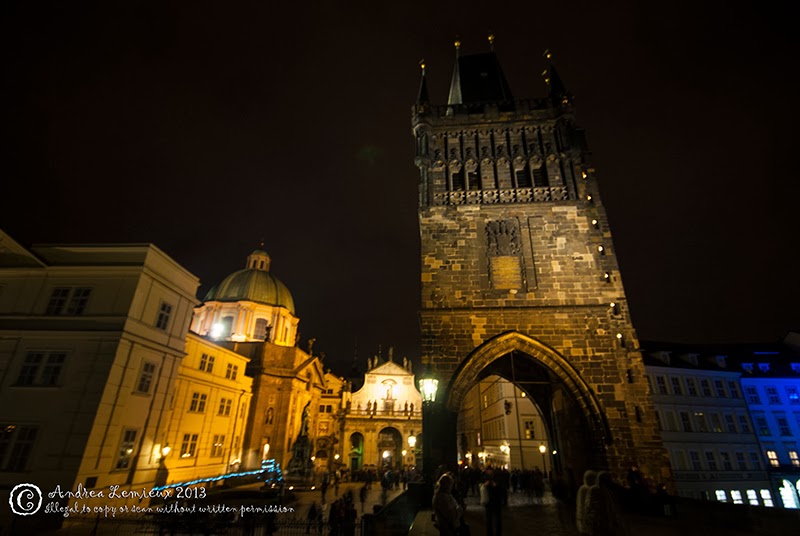 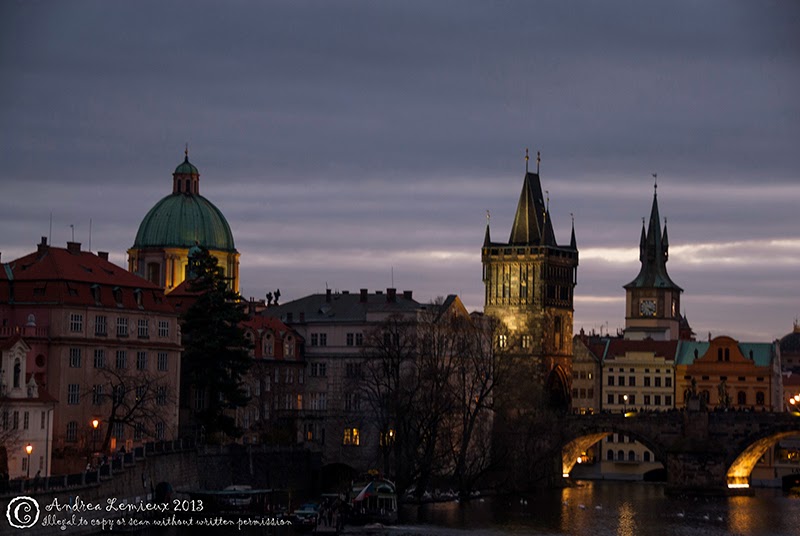 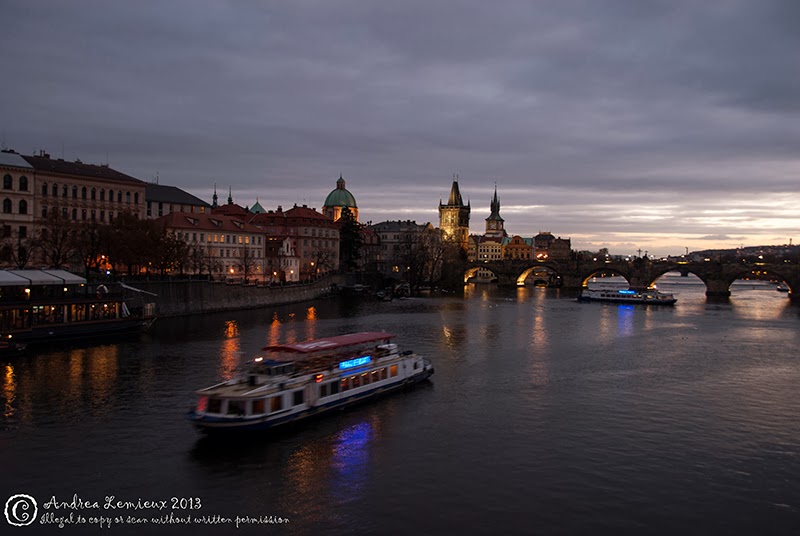 A truly gorgeous city. I will be back!
Posted by Andrea at 07:21 No comments:

In addition to apparently being an American doom metal band, Saint Vitus is also the patron saint of Bohemia. The cathedral dedicated to him dominates both the hill on which the Prague Castle complex sits, as well as the hill itself. 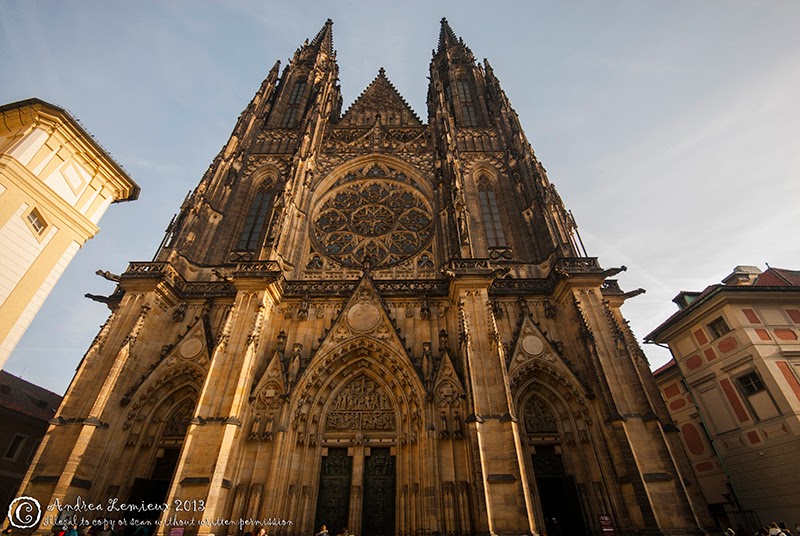 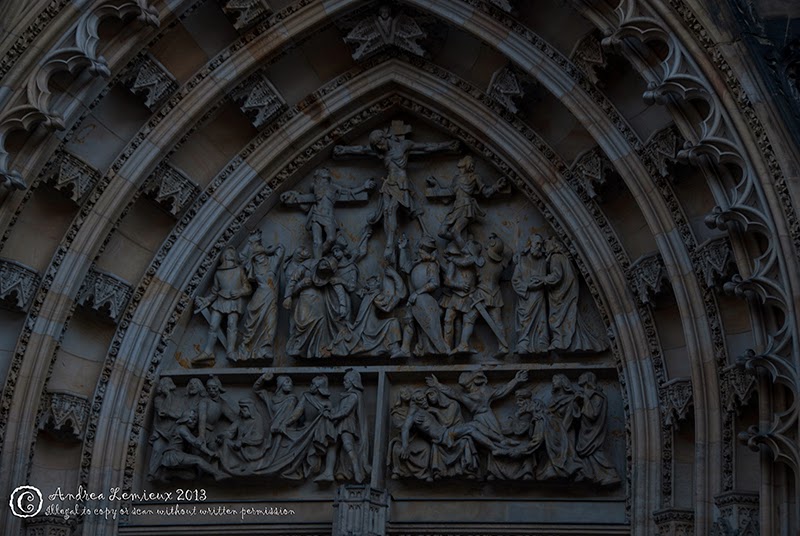 The largest and most important church in the Czech Republic the Gothic and Neogothic cathedral took 600, yes, 600 years to complete. That is some dedication. Its importance extends beyond simply being big and beautiful as it houses the tombs of Bohemian kings and Holy Roman emperors (some of whom were the same people). 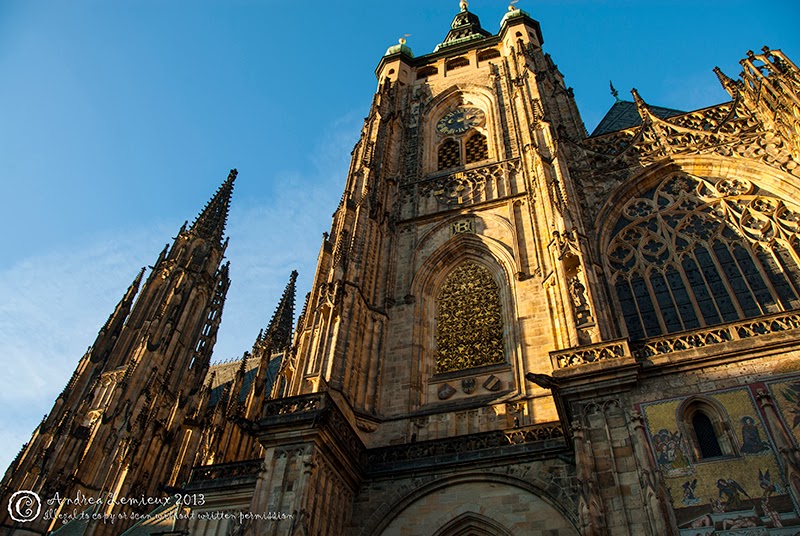 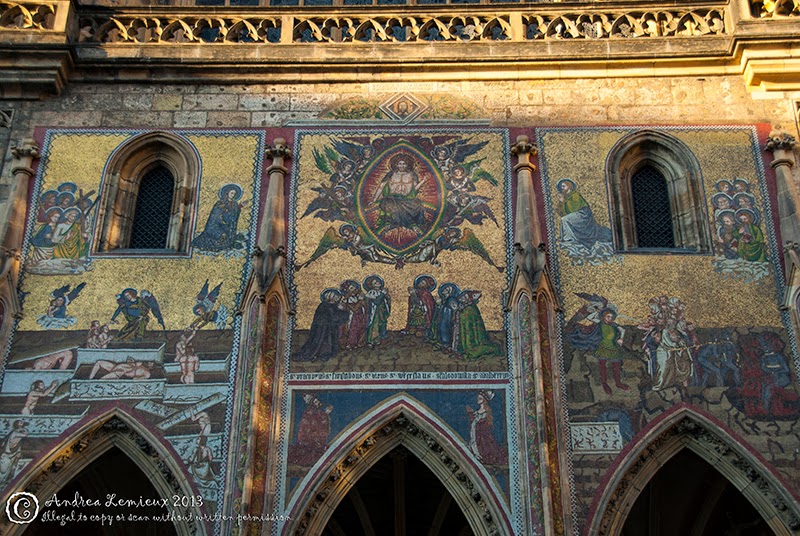 I don't think I've ever taken so many pictures of just one building but it was just so impressive I wanted to make sure at least one or two pictures managed to capture some of it! The few churches I visited in Prague were just amazing. I went to one "small" church in Old Town for Sunday Mass. I chose Saint Giles for Mass largely because it had an early Mass which seemed pretty rare. The fact that the Mass was in Latin and that the church shares the same name as Rupert Giles, key Buffy the Vampire Slayer character were unlooked for bonuses. 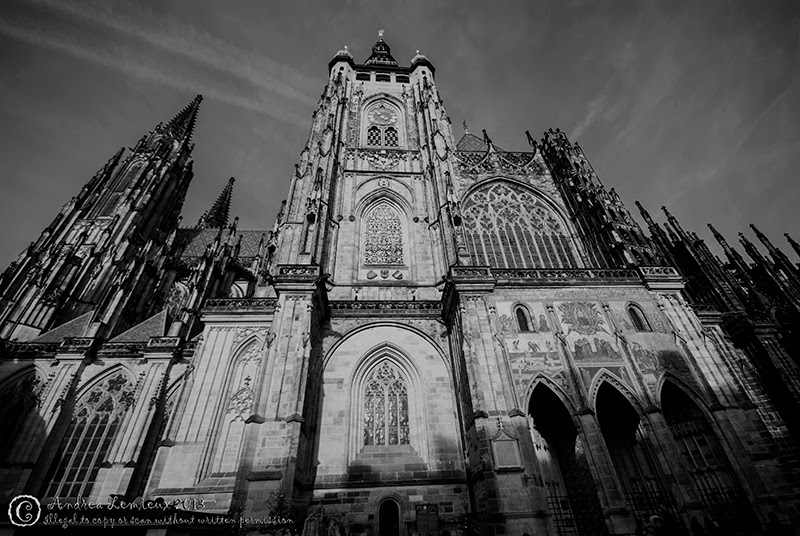 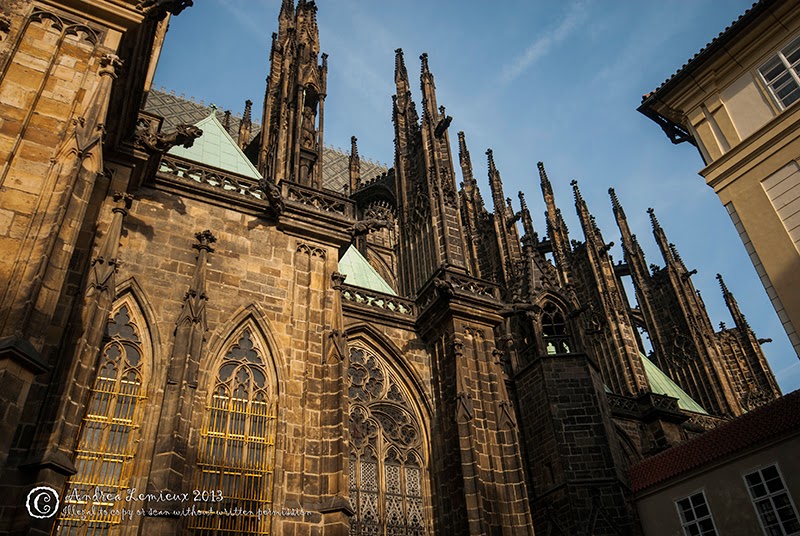 Saint Giles, which I found easily enough in Old Town's twisty-turny streets was...impressive. I'm not going to say it was beautiful but I'm also not going to say it wasn't. It looked rather like Baroque threw up, and quite vigorously so, inside. Unfortunately I have no pictures because I arrived too soon to the start of Mass to take any before and I when I left I wasn't quite sure Mass was actually over. You'd think after 34 years of being a Catholic, and 10 of them attending Latin Mass I'd know when was the end. But this was the trippiest Mass experience that I've ever had-and I have had a few trippy experiences. 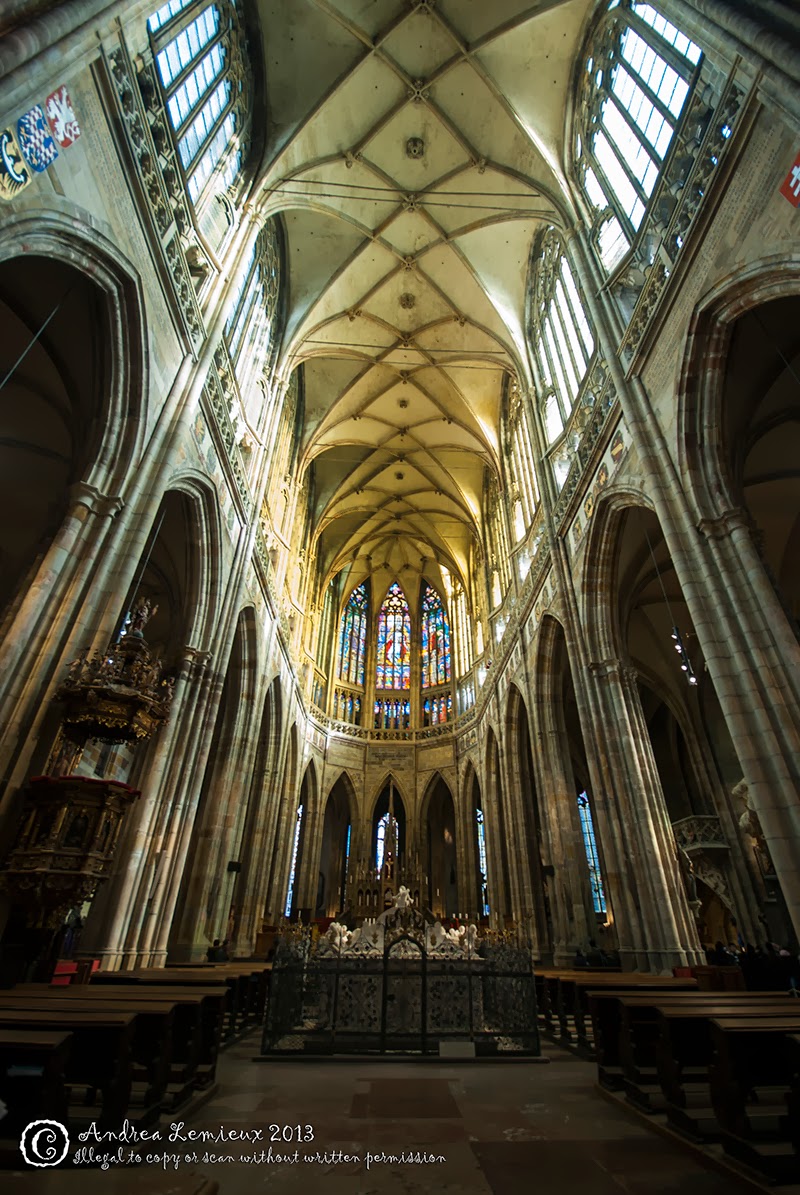 This was hard core, old school Mass. The priest had his back to the congregation the entire time and when he spoke out loud I could barely hear him. It must have been a low Mass because, as far as I could tell, there was only a Gospel. Although I don't mind a low Mass because high Mass means incense and incense makes me vilely ill. Which leads me to think that I might be kinda evil. And while I knew the congregation took very little active part in pre 60s Mass I did not realize that meant the priest didn't actually speak out loud or that we got only the last line in the Our Father. 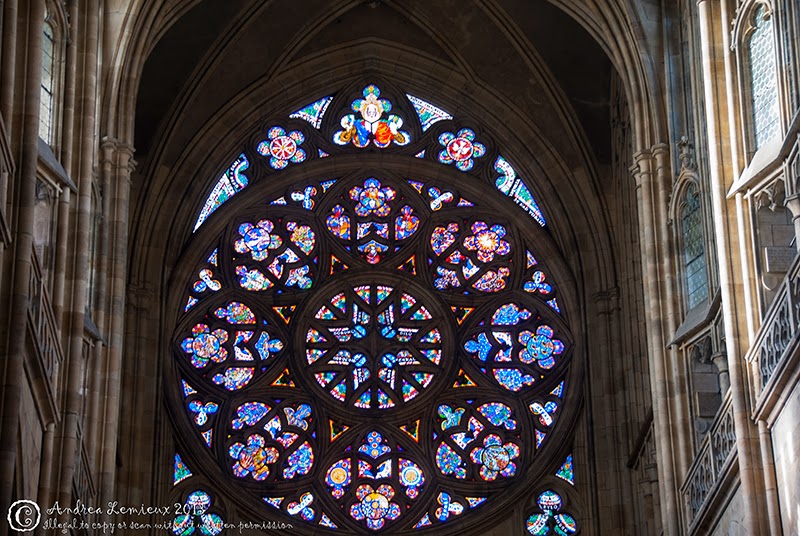 And there was SO MUCH kneeling!!! At first I didn't think the kneelers were all that uncomfortable as far as bare planks of wood go, but then we knelt, and knelt, and knelt some more. Finally, what I was sure was ages later, I distinctly heard a 'Misa ite est' and mentally wiped my brow in relief. But WAIT! There's MORE! And then something else happened, and then I think maybe there was a homily. Then the priest officially left the stage as it were and my body drooped in even more relief...when everyone knelt again and started reciting something! I took my chance then and beat as hasty a retreat as my stiff knees would allow. No wonder my mom was traumatized by Latin Mass. 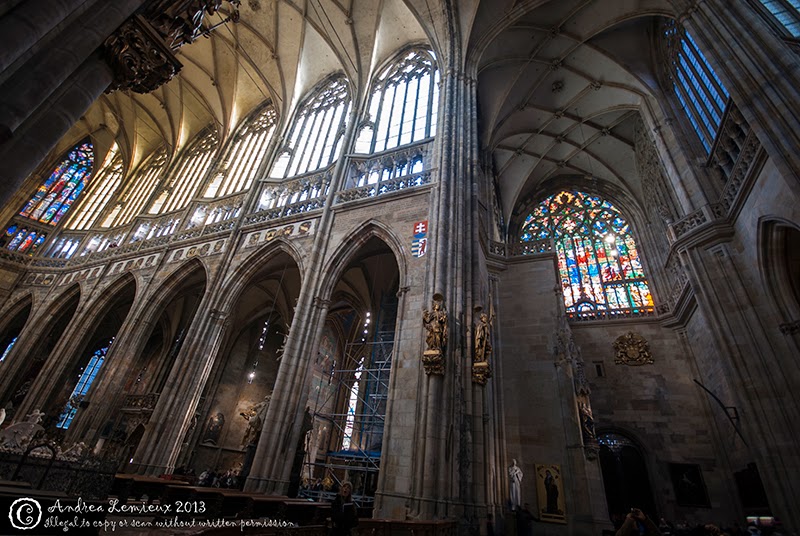 I still prefer the Latin Mass myself but perhaps I'd have been better off clambering up the hill to attend Mass in Saint Vitus'. Certainly would have been an inspirational place to hear it! The way the light came in through the many and varied stained glass windows was just incredible and it felt like being inside a rainbow.

I took my time walking around the cathedral so I could take pictures of everything first with my wide angle lens, then I walked around again so I could do it all over again but with my 18-200 mm. It's a big cathedral and it was a lot of walking. 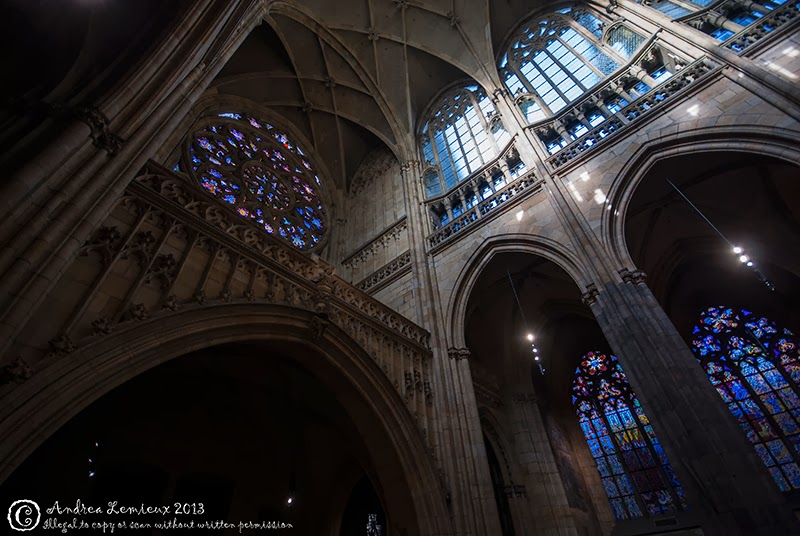 While the construction of the cathedral is largely Gothic and Neogothic, a lot of styles got mixed up in here over its 600 years of construction. Including Baroque. After seeing Saint Giles' church I didn't think Baroque had much more to give but I'm thinking this corner (below) was down to him. 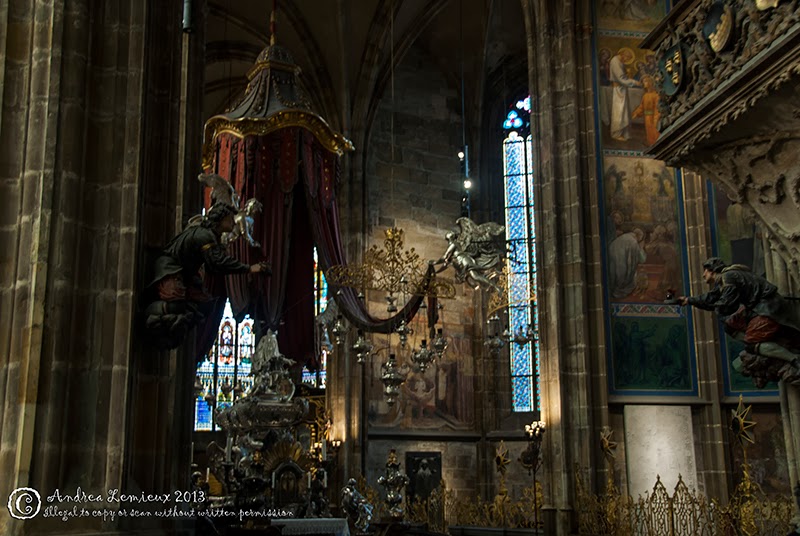 The stained glass windows were really amazing. Bohemian artist Alphonse Mucha was asked to design one of the windows. His depicts the lives of any Russian Studies student's favorite saints...Cyril and Methodeus. We visited the Mucha Museum one day and I think it was one of the trip highlights. I had no idea I was a fan! Mucha has, until now, been one of those artists whose pieces I liked without ever really remembering who the artist was. Happily no longer! In fact aside from the pictures of the Charles Bridge I bought, the only other souvenir shopping I did was in the Mucha Museum gift shop. I certainly wasn't going to buy any marionettes after all. 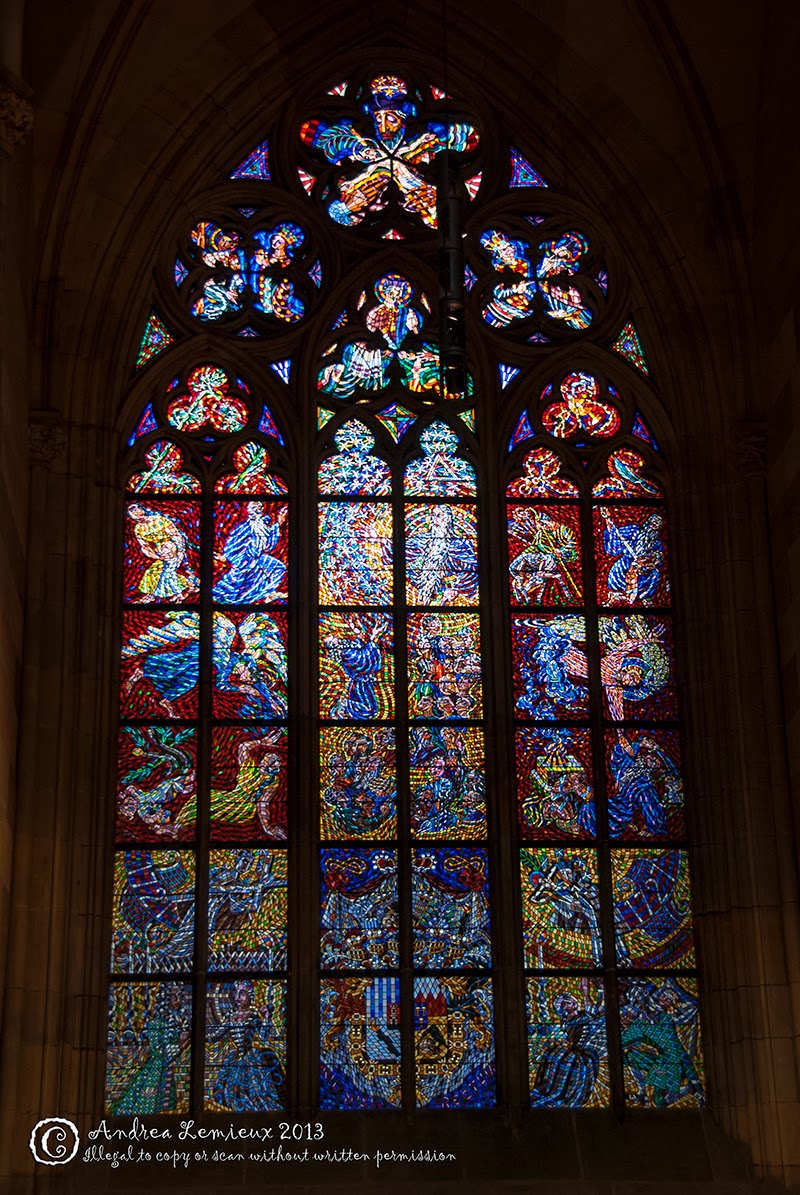 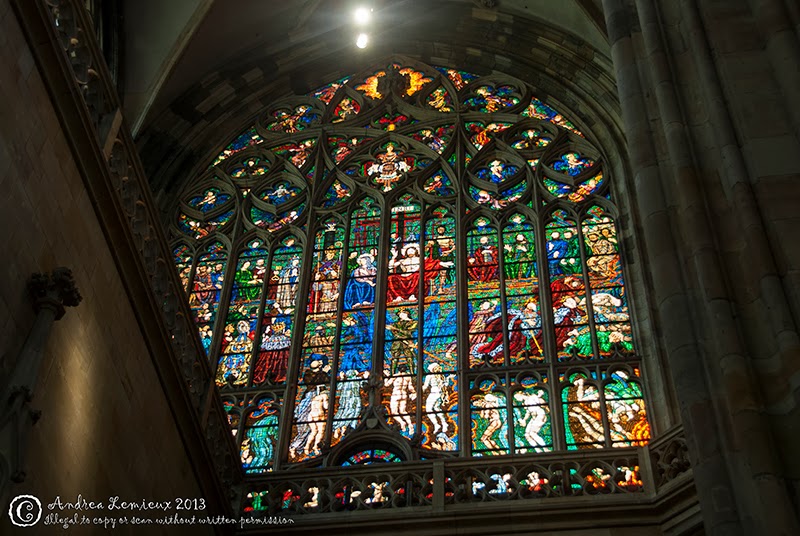 I'm a big fan of Gothic. The overwrought-yness of it combined with flying buttresses (and who doesn't love a flying buttress?!) and fantastic gargoyles just made taking pictures of the cathedral's exterior completely addictive.

I also had a little too much fun with Photoshop and couldn't decide if the church looked better as shot or in black and white. So I have a lot of both. 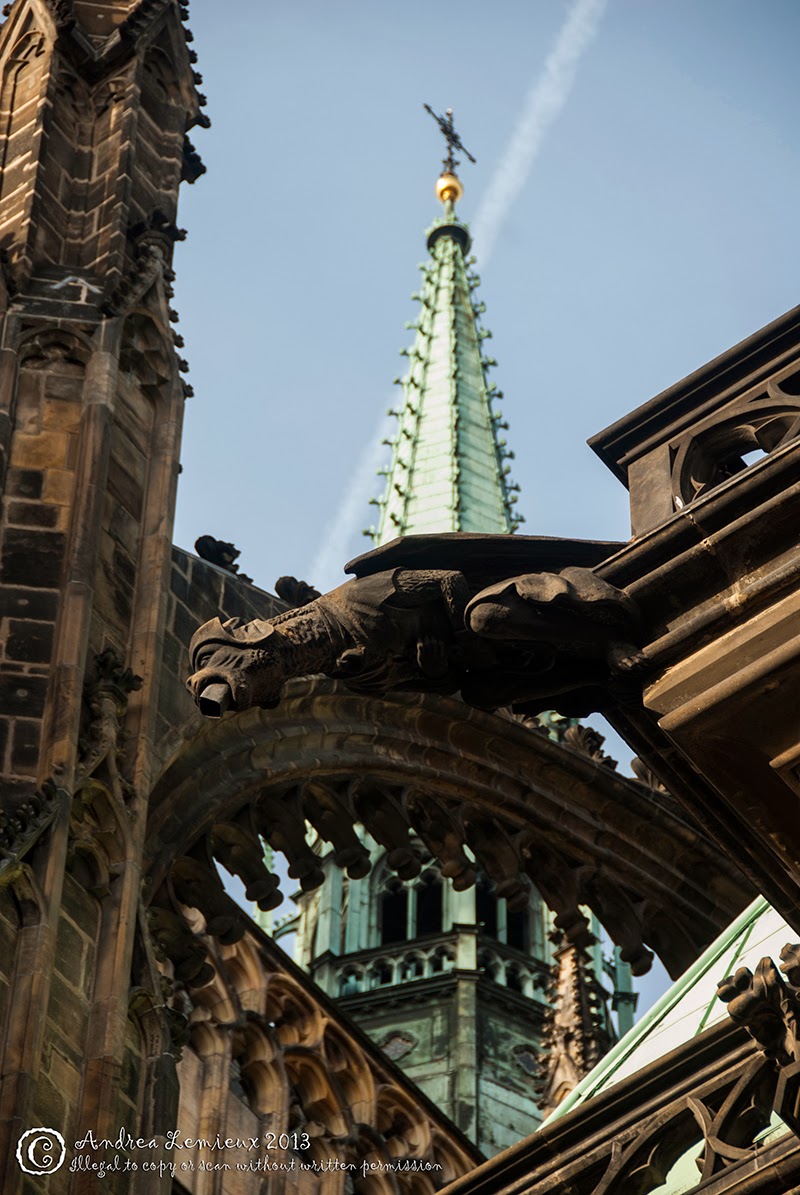 I also couldn't resist doing that thing I do; keeping one element in color and turning the rest of the picture black and white. So even though all these pictures are posted above in their original forms, I can't resist sharing a few.

Since Amadeus many movies have filmed in the Czech Republic and Prague. A lot of them, including one of my favorites, Tarsem's The Fall, have featured one of Prague's most famous landmarks, The Charles Bridge.

Prague is for falling in love, they say, and like many cities in Europe you can find tokens of this in the form of padlocks people hang on fences as a promise of that love. The fence running along the Vltava at the entrance to the Charles Bridge bears the proof.

During the day the bridge teems with people selling their art, enjoying the view, or just trying to get someone. I wanted to try getting some pictures of the bridge with as few people as possible and figured early morning was the best time to try. I left the hotel, about a 10 minute walk from the bridge, just as dawn was lighting the sky. And realized that I should have left earlier! At least the bridge was still emptier than it is during full day.

Walking to the bridge in the morning while most sane people were still warm and in bed, Prague seemed so quiet. And empty. It wasn't just the emptiness of having so few people about, it was something else. Something I felt like the city was missing. Then I realized; no cats! There were no stray cats anywhere that I could see! The cats in Istanbul are almost as numerous as the people and you don't go a day, or a time of the day, without seeing one. 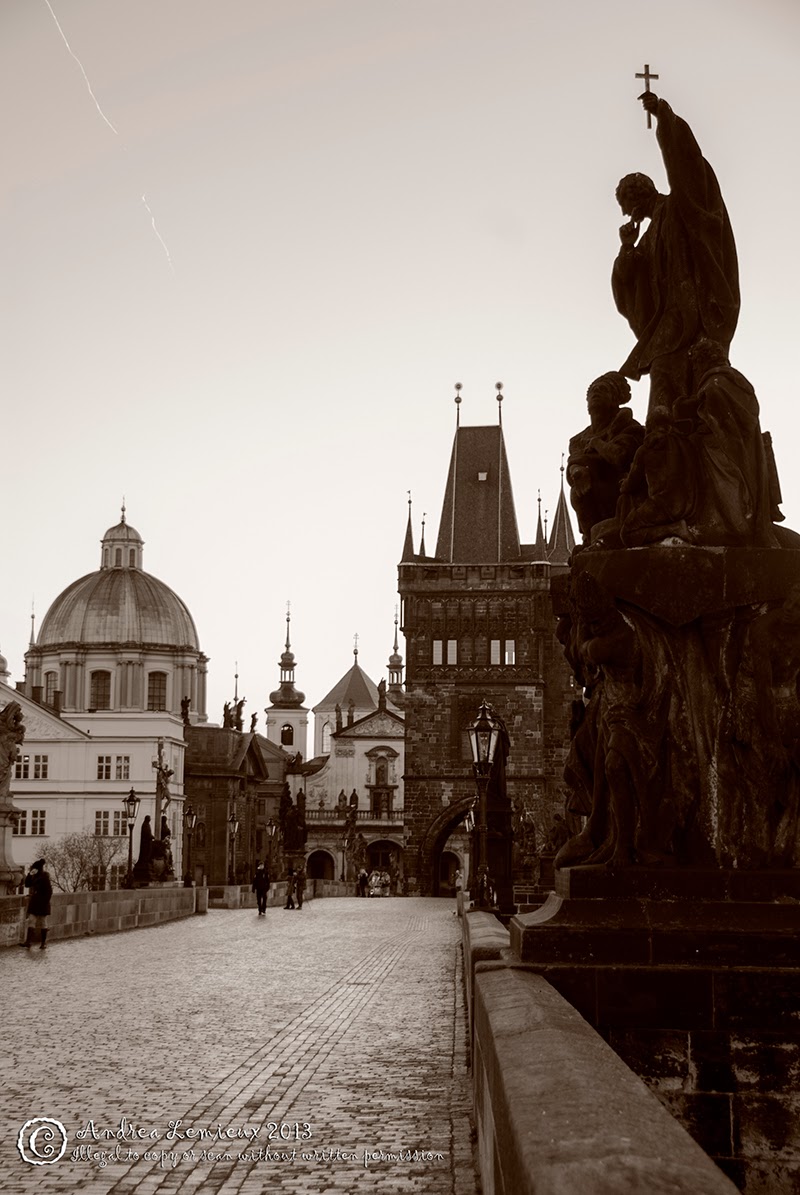 It's easy to see, especially in the gentle light of dawn, how this is a city for lovers! And why so many people try to photograph the bridge. I have to say that I bought a couple prints from the vendors who set up on it because I have neither the equipment nor, more importantly, really the talent to get 'the' shot of the Charles Bridge. Had fun trying though! 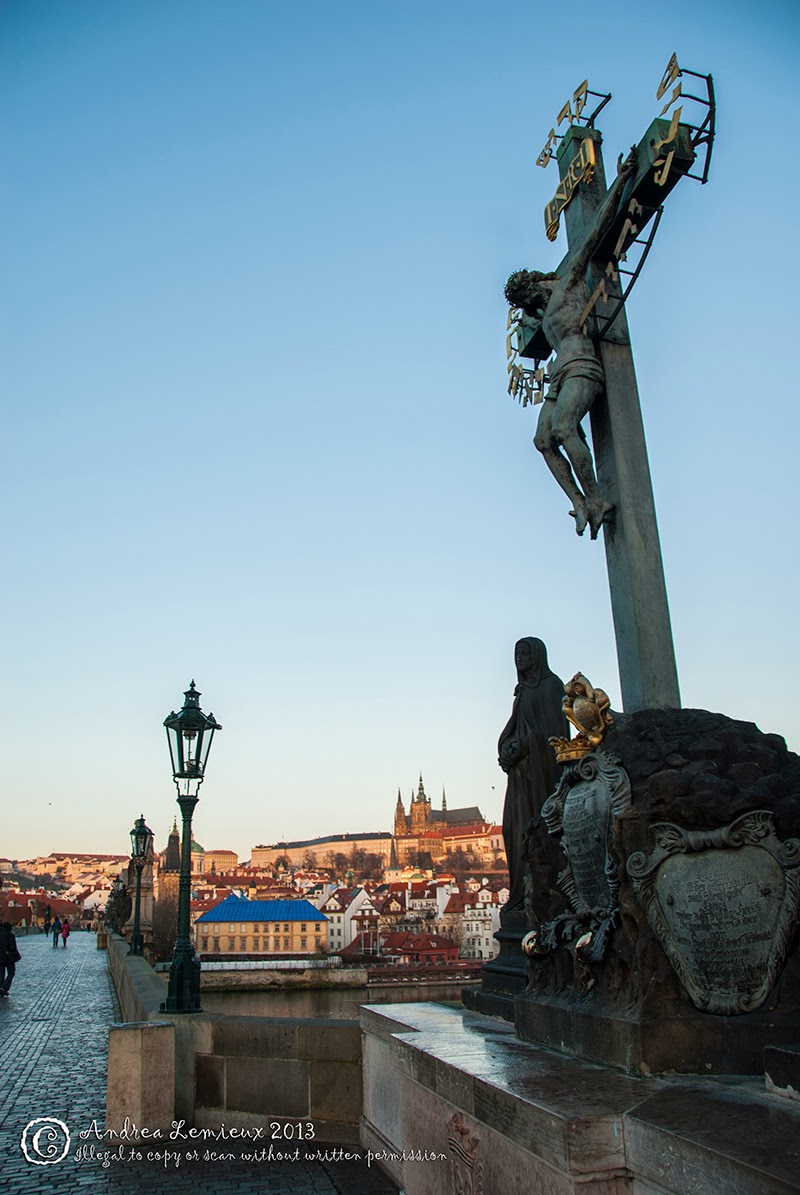 According to our tour guide, the majority of statues, if not all of them, are copies. The originals are in museums. Full list of the statues can be found here. Unfortunately I cannot tell from the descriptions which statues I photographed. Some are pretty obvious but others are a little trickier.

The Charles Bridge alone would bring me back to Prague. Albeit with a new camera lens or two, a tripod, and much much earlier in the morning. But I would happily drag all that with me to spend more time in one of the most romantic spots I've ever visited.