I was super happy to be able to go to the Maryland Renaissance Festival twice this year; once with a friend and once with my mom (who came to visit for the first time in 8 years). Since we'd both been a couple times already, my friend and I made a point of taking in as many shows as possible whereas my mom and I saw a couple shows but mostly wandered around.

I really think that the first show we saw, Flexible Comedy, was my favorite. My face rather hurt after from all the laughing.

Then there were the Pyrates Royal. I regret not having got one of their CDs but might order one from the website. They were pretty good and the tenor had a wonderful voice. 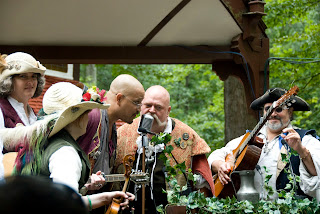 Also doesn't he remind you of Smee from Peter Pan? Then there were The Interpreters, the definition of bawd. One speaks Italian and one speaks blond. Very entertaining.

We also saw a group called Wine and Alchemy. I'm afraid I was already playing with my fun lenses by then so the only picture of that I have was done with a fish eye attachment.

I had good fun that day playing with different lens attachments. There was the fish eye:

And a Lensbaby double glass:

The day I went around with my mom was so much fun. She was like a little kid at Disney. Actually I should ask my sister what mom's first visit to Disney was like because I think she got a bigger kick out of the festival...and who wouldn't? She particularly enjoyed the costumes people had, especially the totally not having anything at all to do with that year's story line costumes.

We also saw the Dangling Darlings and she got some good shots of them.

We saw a Gypsy band, a gentleman randomly playing a spinet, and some lovely stilt walkers. 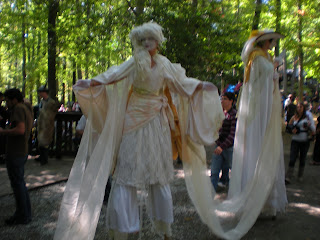 We also ran across a guy I saw last year. Last year I saw him only as a butterfly but this year he was a butterfly, a baby, and was riding a horse. 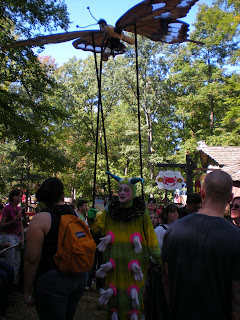 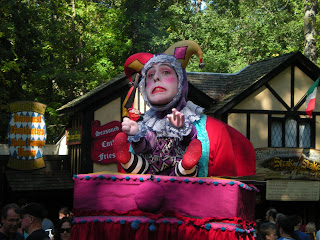 The horse contraption was adorable, looked somewhat like a My Little Pony actually. My mom fell in love with it. I think she was more enraptured than the kids. It was adorable.

That's mom in the stripes.
I also introduced her to the awesomeness of fare food including fried brownies and fried candy bars. I was pretty disappointed with the brownies and will, myself, be sticking to the candy bars in the future.

Best part of the day? I got my face painted. I was so pretty I waited until I absolutely had to to wash it off. In fact, if the next day hadn't been Sunday and if I didn't consider face paint somewhat inappropriate for Mass I think I'd have kept it on. 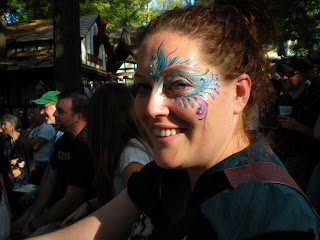 Can't wait for next year!
Posted by Andrea at 17:10 No comments: This morning many of us were up before the coffee call. After a bit of morning yoga, we packed up camp, and loaded the boat before hiking up the canyon to the ancient granaries. I notice that everyone seems to have settled into camp life well, and the mood is quite easy today. The hike started in the sand, and ended up climbing several hundred feet of stone 'stairs.' I kept thinking back to the Great Wall in 2008, and Andrea's harrowing experience. I kept thinking about that on the way up, and also the horrors I read in the Death in the Grand Canyon, and when the guides start talking about people 'rag-dolling' down the mountain, I start getting nervous. Thankfully, my ankle held up without anything more than a little stiffness, but the hike probably did it some good in the end.

The hike's intensity and the heat increased in relation to each other. As the hike got more intense, so too did the heat. The hike quickly became what we referred to as 'The Death March." We were all sweating, guzzling water from our packs, and I was definitely panting, but the reward of the spectacular views of the river and canyon made it all worth it in the end. A few people had to turn back part of the way there, and though I'm not sure how I managed, I did make it to the top, and the view from there made it all worth it. We took a break while sitting at the granaries, and some people climbed a few extra (perilous) feet to peer into the granary. I was nervous about that, especially since touching the stone there is verboten, and I was still having horrifying images in my head of rag-dolls falling of the canyon. Coming down was much easier, especially since the temperatures cooled very quickly. The river is truly life-giving, and I was surprised by how much I missed it such a short amount of time. I think after the heat of the hike, we were all feeling relieved to be back on the water. Once we were back on the water, today seemed to be all about singing through the rapids (a trend that would continue until the very last day of our journey). The group appears to be gelling more, and getting comfortable with each other. This is really turning out to be an amazing trip, and I am so glad I could come! The lunch spot was nice, with little bits of shade everywhere, and plenty of things to explore while we waited for the Azra crew to prepare lunch.  I wandered around a bit and met a spiny lizard who was quite curious about what we were doing there. Judging by how much he liked to have his picture taken while doing push ups, I'm sure this little guy spends a lot of time in the company of and examining humans. In addition to the Lizards (which became our most photographed animals on the trip), this lunch spot also included a beautiful array of stalactites (on top) which looked like white soda straws hanging from the limestone rock face. The Lunch today was Roast beef on whole grain bread with horseradish mayo, German mustard, avos, tomato, and Havarti cheese with dill. I don't normally like roast beef, especially not in sandwiches, but this was delicious! I ate my fair share (and more) of the cookies, and following Penny's lead, made apples with peanut butter, dried cranberries, and pistachios. When I felt stuffed later, I certainly knew why. After lunch, I played Euchre with Luchs, Kelli, and Jones. We cut the game short to get back on the boat, where we headed for the Little Colorado and where Captain Dave had a great surprise in store for us! On the hike, we saw this collared lizard who popped out from under the rock to watch us as we walked by. As we rounded the bend of rock along the riverbed, we could see the water changing into the prettiest, alkaline blue water. When we arrived at the starting point, we were instructed on how to put our life jackets on like diapers so that we could flow down the river like this: After this, we felt exhilarated! Many of us flowed down the shallow, lazy Little Colorado rather than hike back. It was a welcome and relaxing time back to the rafts before we headed to make camp for the evening.