I'm going to say right off that this was a no for me. A really big no.I didn't really even make any notes about it except "No".

The Barudi dry white is a blend of Chardonnay, Misket, and Narince grapes. Heavy on the Chardonnay methinks. The wine has an interesting color that I think must maybe come from the Misket...it's a very pale yellow, paler than a Chardonnay, and with light greenish tints. 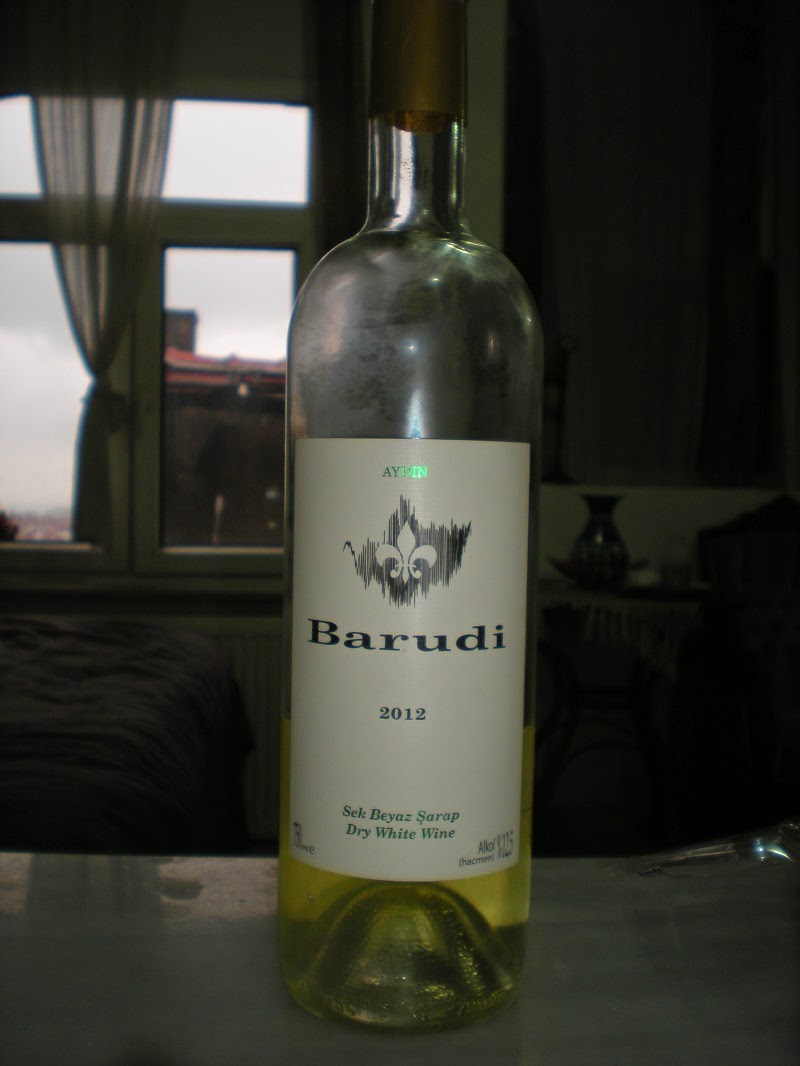 Floral and oaky on the nose, the flavor is ... frankly I don't know. I tasted oak, oak, and more oak. Blech. I wish unoaked Chardonnays were easier to find. They're really quite lovely but everyone does insist on ruining a perfectly decent grape with all that wood.

If you like dry and oaky then I guess this one's for you! I'm coming to realize that as far as white wines are concerned, I lean towards the semi-sweet to sweet variety. But since I'm not yet entirely sure which Turkish grapes produce those wines I see a fair amount of trial and error ahead of me!
Posted by Andrea at 09:07 No comments:

Waiting for My Wish to Come True

Back in December a friend told me about the April 23 Aya Yorgi festival on Büyükada and I've been waiting for it ever since! Aya Yorgi (Saint George) is an orthodox monastery honoring (quelle suprise) Saint George of the dragon slaying and is situated at the highest point on Büyükada 200 something meters up. I've been to Büyükada a couple times this past year but I've never been to the monastery. Even knowing it was there, little could induce me to make the climb...but for the promise of a wish come true! 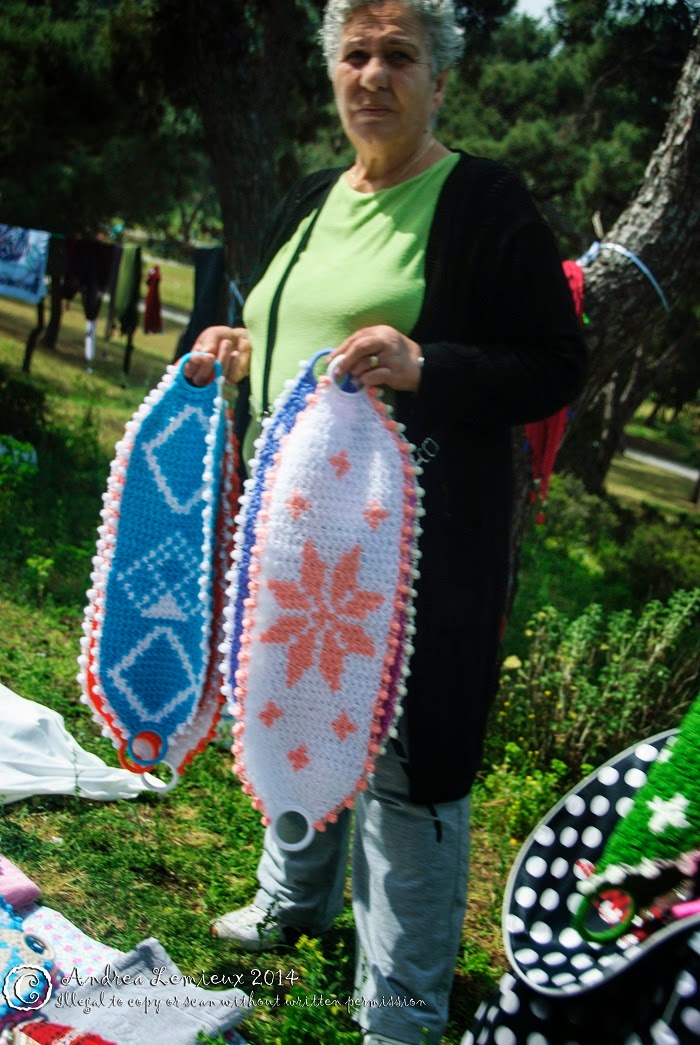 In order to get to Aya Yorgi you have to first climb the hill that takes you to the bottom of the hill to get to the monastery. Yeah. There are usually a few vendors here and there selling those weird flower crowns that seem to be a thing in Istanbul but today there were a plethora of people selling all sorts of things. Including the strings, charms, and candles you need for your pilgrimage.

The day of the festival is also a Turkish national holiday and everyone here, regardless of religious affiliation, celebrates the Aya Yorgi festival so the ferries and the island were even busier than usual. I wasn't sure if the ferries would be running on the regular week day schedule or the weekend/holiday schedule so I just went to the Kabataş iskelesi early to get on whatever there was to get on. It seemed that rather than running either of the posted schedule, they were just running all the ferries as fast as they could. I managed to get to the front of the line for one and so got a seat on the top of the boat in the open-air section. The holiday atmosphere filled the air on the ferry, as did the music from a drum someone had brought along and the singing and clapping that accompanied it.

It was so crowded when we disembarked on the island that it took me almost 10 minutes to fight my way through the crowds to the head of the trail. Once there though the crowds thinned out quite a bit so I was able to enjoy the stroll (while avoiding the regular crazy horse cart drivers and people who have no business riding bikes) to the base of the monastery hill. When I got to the base I bought my string and charm, found a place to tie my string, and got started.

It was not easy going! On the plus side, there were so many people like me also walking off path to tie their strings in the wooded area that there was no need to rush. On the downside, there were so many strings from the earlier morning pilgrims that it was a struggle to move around. I felt very much like a Tolkein character making my way gingerly through the webbed layer of the giant spider Shelob. If Shelob spun multicolored web that is. At least it wasn't sticky! I was really trying to be careful as I made my way over, under, around, and through the various cat's cradle traps. What if I broke someone's string! Wearing sandals with velcro straps was certainly not a wise move on my part as the velcro kept trying to eat the strings near the ground

So what's the deal with the string? I've done some Googling and I'm afraid I cannot find the origin of this tradition, but the deal is that if you can make the climb with your string intact (either to the very top or to whatever point you run out of string) then the wish you've made will come true within the year. If it does come true then you should come back the following year and pass out sugar (literally just sugar cubes) to those making the pilgrimage. And I did see plenty of people passing out sugar!

My entire climb I did my best to contemplate my wish, anchor my string as firmly as I could, not break someone else's string, and not slip on the carpet of strings. They really made the path slippery. I also did my best to avoid the creepy Jesus people. I'm Catholic, we've talked about that, but I'm a bit old school. Give me Latin, lots of kneeling, choirs, and heck bring back the hats. But keep the Yay Jesus people away from me. I don't care if you're Catholic, Protestant, or even a Jew for Jesus (still waiting for an explanation on them). Your enthusiasm is awesome...but back up off of me. So while making my way through a string jungle, I and everyone else, also had to dodge the multiple yabangi groups taking up space on both sides of the path who were passing out pamphlets, singing far less good music than we had on the ferry, and asking if we knew Jesus.

Finally I reached the top (or at least near the top) of the hill. I didn't make it to the Aya Yorgi monastery itself because the crowd was a solid, unmoving wall at the top of the hill. And if I've learned anything this last year in Turkey it's to avoid crowds. Instead I explored the wall where people were lighting candles for their wishes and prayers. Each color candle had a specific wish associated with it: love, money, children, soldiers, success, etc. Likewise the charms.

Getting down the hill was almost as difficult as the trip up. Given my proclivity for falling down I was especially careful. The entire hike took me just shy of two hours so I treated myself to some of the glorious lokma available from island vendors as well as a large ice cream. I also somehow ended up on an express boat back to Kabataş that didn't stop at any of the other islands and so took only about an hour instead of the usual 100-ish minutes. 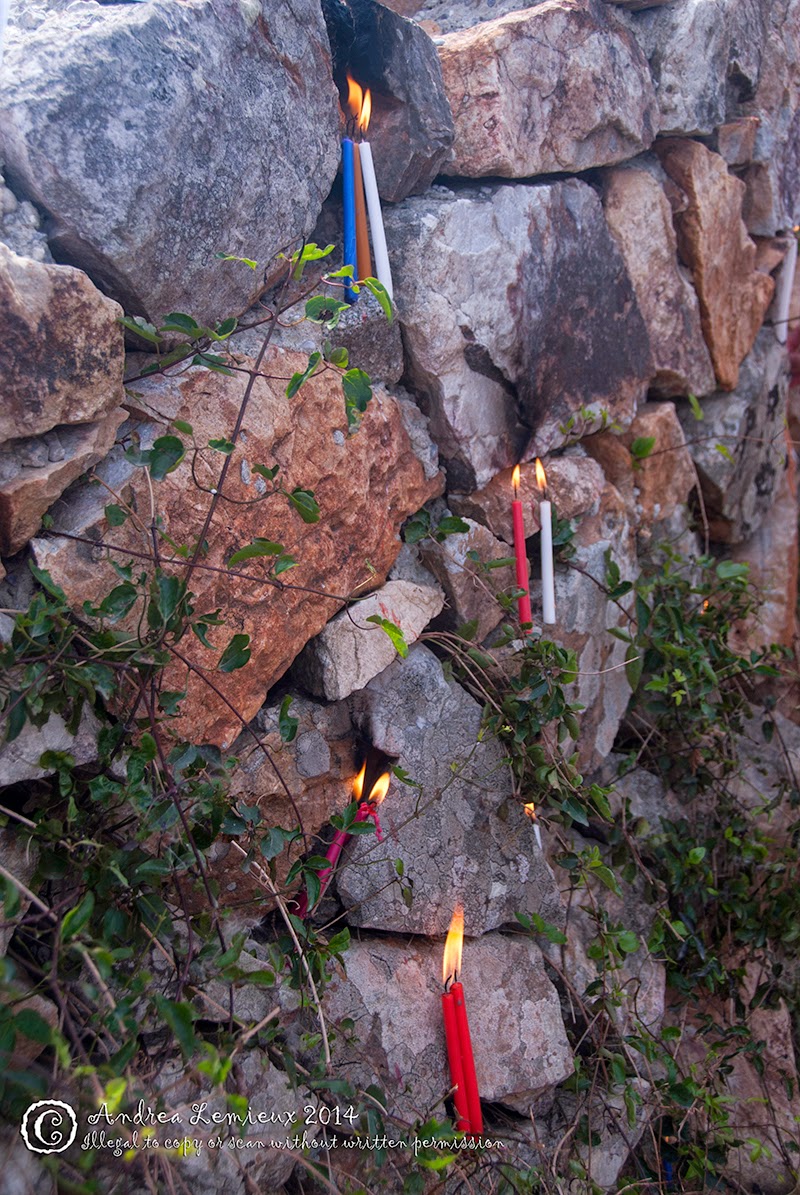 I successfully made it all the way to the end of my string without it breaking. So in theory by this time next year my wish will come true. If it does I'll be back on the island passing out sugar cubes!In the meantime thought I'll keep my fingers crossed and take any other luck that comes my way.

Such a week and it's only Wednesday. First I got a job, then I got sick (thus the late post), then I had an Istanbuli police officer show up at my door. But also there was wine!

Last week I got a new consulting contract. Yay money! Means I can afford to keep myself in wine a bit longer. To celebrate we had dinner at Otto in Cihangir (which was great) and we ordered a bottle of the Ancyra Boğazkere. Like the Terra, the Ancyra had many of the hallmarks inherit in the Boğazkere grape varietal: spicy, (dried) red fruits, dark dark red color with blue hues etc. 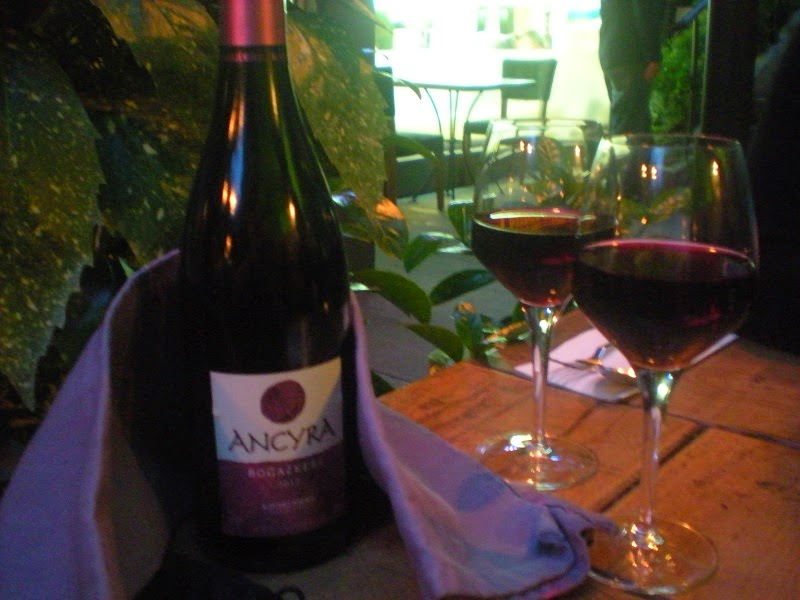 We both enjoyed it, but for me the Terra wins over the Ancyra because there was one thing it lacked...the tanins. What really blew me away about the Terra was the texture of the wine.

Ancyra is generally a really good and safe wine here. Restaurant markup is a bit awful (about 23-30TL in store and 80+ TL in restaurant) but you really won't go wrong choosing one. But if you have the choice and my two cents makes any difference, pay the slightly higher price for Terra!
Posted by Andrea at 07:25 No comments:

I was in the middle of a post about the Aya Yorgi festival (by which I mean I uploaded pictures and was too lazy to actually write anything) and decided to switch gears. May Day, which in many countries is a celebration of workers, spring, good thing etc and so forth...is a little different here in Turkey.

In Istanbul it means that, at 11 AM, people a few neighborhoods over are being evacuated due to the extreme tear gas already infecting their neighborhood. It means that shops are closed, streets are empty, people are finding other places to park their cars so they don't get damaged, several modes of public transportation have been closed, and there are roughly 40,000 police officers deployed in strategic Istanbul neighborhoods.

So I'm not going out today. Which is a real pity because for the first time in over a week there's sun. And it's warm. So since the city is going nuts I'm going to stay in today, stream How I Met Your Mother and Orphan Black on Amazon, and post pictures of pretty flowers.

Which is an appropriate thing to do in Istanbul. Pretty much the entire month of April is dedicated to Istanbul's tulip, or lale, festival. There are accounts of tulips being cultivated in Turkey as early as 1000 AD but it was in the 1500s during the Ottoman Empire when tulip mania exploded.


Most people hear "tulip" and think the Netherlands. Or if you're from West Michigan like I am, you think Holland, MI. Home of its own windmills, wooden shoes, tulip festivals, lots of people whose last name begins with 'Van', and a phenomenon known as "West Michigan Dutch".

What most people don't know is that The Netherlands didn't get tulips until later, not until the 17th century. While both countries rivaled for a time to lead the tulip craze (and for a bit Turkey was on top) the impact of the flower has had far-reaching effects beyond commerce, particularly in art. In Turkey, the tulip (followed by the carnation) is the most common floral motif found on ceramics, mosaics, materials, jewelry, and so on.

And while The Netherlands may hold the crown for tulipy things, I kinda have to wonder about a society in which a single flower bulb set you back more than 10 times your annual salary. And people paid that.

Also that vase I bought, 240TL sticker price. I got it for 100TL. I'm not Barney Stinson awesome but it's close.