As in Life, There Are No Penises For Me

I haven't really said anything about Goreme. It seems very much like a city that's grown up around providing services to tourists but in a much better way than Pamukkale (where you really only want to have to spend one night, max). Goreme has lots of the obligatory souvenir shops, hotels, and restaurant choices but manages to remain charming. People are quite nice, and sometimes the food is pretty great too. 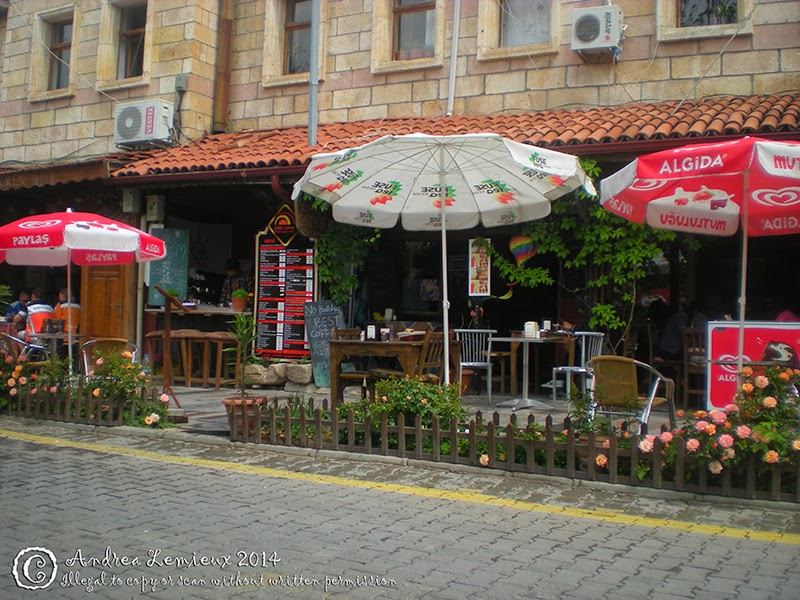 Not a win though? Coffee. Neither at the place with No Bullshit Best Coffee until you get to Australia chalk board (although if that IS true then I'm sad for everywhere between Goreme and Australia) or the cleverly named Coffeedocia. Coffee in Turkey really isn't all that fantastic across the board really. The biggest difference between a cappuccino and a latte is that the cappuccino might have some cocoa powder sprinkled on the mountain of foam. Even at ever present Starbucks they don't know any better. Everyone also thinks that French press grounds (again, Starbucks you should know better) are the same as Turkish coffee powder. Sigh.

It's possible that the locals were being cagey with the sign pointing the way towards the Secret Church. MG and I scrambled up, down, and around some hills but failed to find, well anything really. On our last afternoon while eating lunch I was confused about something across the street from our restaurant. The odd, gourd-headed scarecrow aside...I couldn't quite figure out what I was seeing. So I stared hard for a few moments, And yes, it was a taxidermied swan. Just sitting there. Hanging out. Because why not?

While I was tempted by several different souvenirs I was convinced I needed, in the end the only thing I bought was petek bal (honey comb). It's pretty expensive in Istanbul. Really the only place I've seen it is in spice shops where a small amount can go for as much as 25-30 TL ($12-15). At a street market in Goreme I got slightly more than half a kilo for 10 TL ($5)!!  I was dancing in the street happy. Unfortunately it didn't come in the most sealable of containers so I got the hotel to wrap it up in plastic wrap, then further wrapped it in the plastic rain poncho I bought on day one, and then put it in a plastic bag. I wasn't sure if it would be considered "liquid" and didn't want to chance the airport taking it away so it had to go in my suitcase. 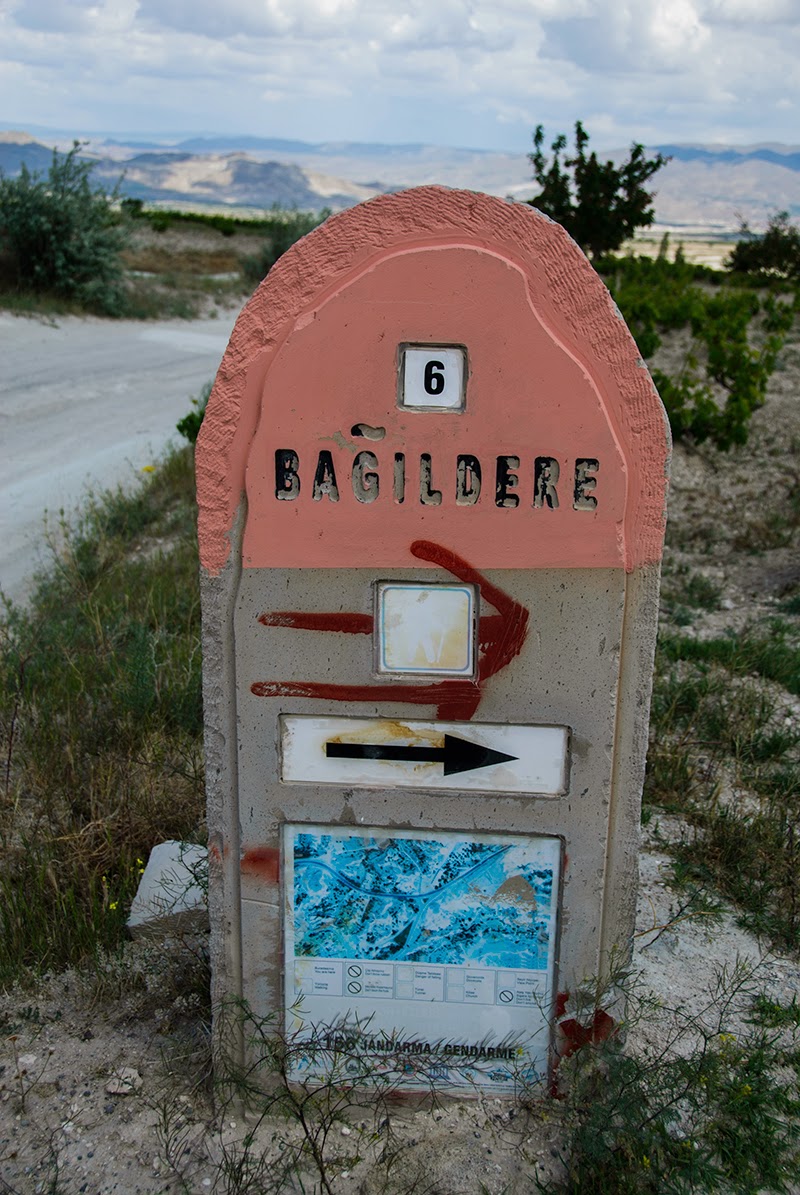 On our last afternoon in Goreme I was determined to find the valley that's on all the post cards. The one with the fairy chimneys ads always show balloons flying over (even though ours never went near it). It was excessively confusing because it was called one thing on the photographs, another thing in my Lonely Planet, and yet another thing by the guys in our hotel. MG thought we should go to the end of the trail, walk part of the way in, snap a few pictures, then go back the way we came. No, no said I. It's only two kilometers and everyone says it's an easy walk.

My increasingly nice (thanks to five flights of stairs) ass it was only two kilometers OR an easy walk.

We managed to get a a dolmus to drop us off at the head of the trail by asking for Love Valley. Since this is one of the few places around without an entrance fee we were only partly certain we were in the right place so when we saw a trail marker to White Valley I was pretty relieved. So we'd found the trail to the valley. Getting in it was something different. Unlike Ihlara Valley there were not a multitude of stairs leading down. And no sooner did we start down into the valley then I did that thing I do. I fell. Luckily I managed to protect my camera by sacrificing some skin from my right arm, top of my right hand, and the palm of my left. I still have a bit of a scar on my right hand. MG and I debated about continuing but I pushed for going forward.

The rest of the way down was much easier than it looked. We thought we would then stroll along the bottom of a dried creek bed, see some fairy chimneys, or "rude boys" so called because of their rather suggestive shape, take some pictures, and be back in Goreme in no time. Boy were we wrong. When we got to the valley floor we were attacked by thorny, killer plants that we had to duck walk under, skirt around, and detangle ourselves from. And the valley is far, far longer than two kilometers.

Not helping the matter was me comparing the harrowing and disappointing trek to my dating life and general relationship with the opposite sex. Eventually (ie pretty quickly) it devolved into me stamping my foot and loudly declaring that I wanted some damn penises. The few tantalizing hints we got were simply not satisfying. And you can bet we commented again on how the hike imitated life.

At one point while struggling through some briars, we saw a couple strolling along as if they hadn't a care in the world. How on earth they got there was beyond me but after a few wrong turns MG and I finally found a path that wasn't trying to bleed us to death. Also the briars had ruined my hair. Eventually we even found the dried creek bed we were supposed to follow. Two of the longest kilometers later (it has to have been more) we were finally rewarded and came upon the area of White Valley that is also called, due to the shape of the fairy chimneys, Love Valley.

After all the hard work getting there though it was a bit of a let down (insert more jokes). Since this easy walk had taken a lot longer than I estimated we were also running a little close to depart for the airport time for my comfort so I did not climb up hills to get pictures of the chimneys from their level.

Leaving behind the rude boys we did our best to hustle. Finding two more White Valley markers along the way was encouraging but we still needed to figure out how to get out of the blasted valley. We cam upon a refreshment stand of sorts and bought the most expensive juice I've ever had in Turkey. But the old guy running it gave us directions back to Goreme that basically amounted to: walk more, turn right, walk more, turn right, walk more. Soon after leaving his stand and the gravel path we found ourselves on a proper road which we followed to a larger road. I was worried thinking that we were on Museum Street and would have to walk down the huge hill leading to the Goreme Open Air Museum and then the 1.5 kilometers to Goreme. However we lucked out and someone stopped his car on the road next to us asking if we wanted a lift. After looking at each other MG and I decided that no one with a new, shiny clean Mercedes was likely to kill us (also I at least was so tired I didn't care) and got in. He turned out to be the owner of the hotel I almost booked us into. Nice guy. I'll stay at his if I'm ever back in Goreme.

In the end we got back in time to enjoy a nice lunch and puzzle over a taxidermied swan before our shuttle to the airport. It took my a year and a half to make it to Cappadocia but it was exhausting, amazing, and so well worth the wait.
Posted by Andrea at 05:13

Sounds like you had a very "interesting" time! I'm glad you managed to keep your sense of humor about it, though I suppose it is a lot funnier in retrospect than it was at the time!

Sounds as though you had an "interesting" time! I am glad you were able to keep your sense of humor. I am sure it is much easier to see it as funny afterwards rather than during the experience!

We had a few laughs during but you're right, Raymond. Most of the funny was after we found our way out of the valley and were no longer worried we might be eaten by a thorny bush of some sort!