It was really difficult to chose pictures for this post. My camera memory card is relatively small and through a series of unfortunate events the larger memory card I ordered never made it to me. I took so many pictures on the morning of our balloon ride that I was out of memory by the time we got back to the hotel. So is it really worth waking up at 3:30 AM and 120 Euros? 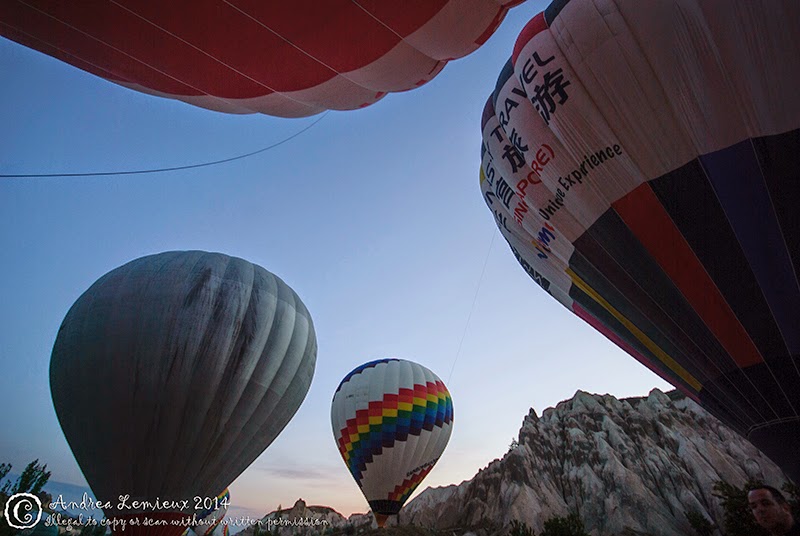 3:30 AM does come awfully early though. I get annoyed when my cat wakes me before 9 so this was really painful. We were picked up shortly after 4 AM by the balloon company we'd chosen (Rainbow Balloons) and joined a van full of chipper New Zealanders who rightfully pointed out that we shouldn't be yawning since we had a later pick up than they! We were taken to the Tourist hotel on the Museum Road to meet up with other groups destined for a ride with Rainbow Balloons and for breakfast which, other than the fresh, hot, pogaca, I would happily have traded for another hour of sleep. 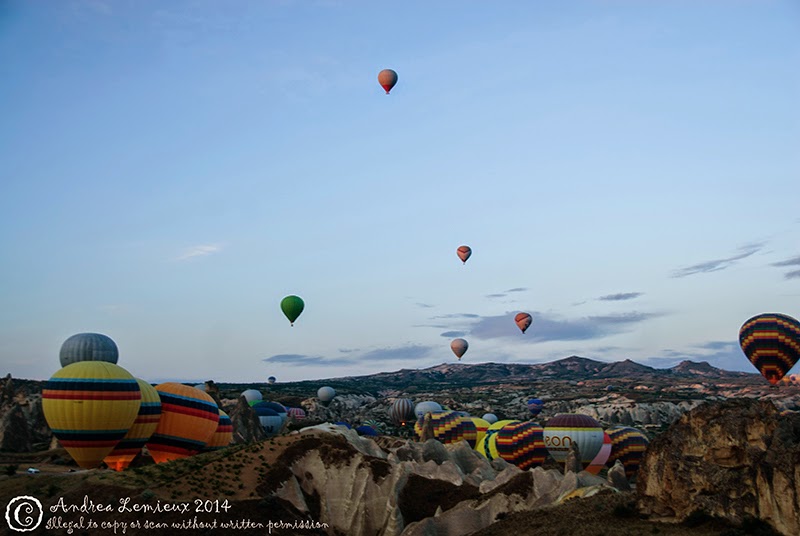 I've never been in a hot air balloon before so the basket was a surprise. I guess I expected on big open basket in which we (16 people) would be jostling for a good view. Rather the basket was divided into five compartments: the center to the pilot and four small compartments in which just four of us jostled for a good view. Our pilot was great though, he made sure to turn the balloon pretty regularly so we all got a chance to see everything. 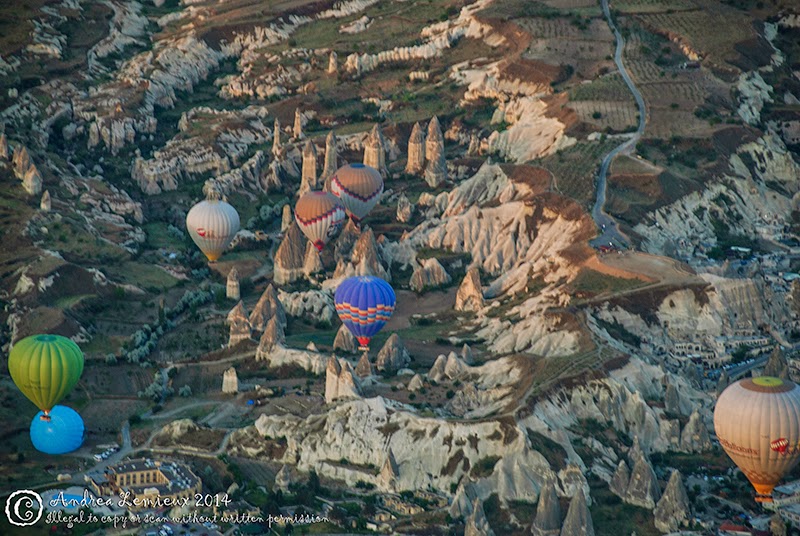 After we took off we flew fairly low for a while, through Cappadocia's Rose Valley (so named because of the color, not because it has flowers). Then we slowly rose to our max height of 650 meters (1,148 ft). There was really no sensation at all while we were flying, not even during lift off, but when we got to 650 meters and I saw all the tiny balloons down there that had yet to climb high...yeah I stated freaking out a little. While I'm not afraid of heights I have a very reasonable and legitimate fear of falling. And experience has proved that if falling is possible most likely I'll do it. MG assured me that there was no way I could tip over the basket and fall out though. They get you up so darned early so you an see the sun rising over the valleys. It's pretty well worth it.

Most of my pictures are of the other balloons as you can see! This being one of the major attractions of Cappadocia, there are so very many balloon companies. And each and every single morning, every company puts multiple balloons in the air. Since we weren't flying over the famous Love Valley (read about it in a future post though!) the landscape wasn't all that iconic and interesting so looking at the other balloons filling the dawn sky was more fun!

Since it rained so very much the day before we were a little worried that our flight would be canceled. We still had another day to try if it were, but that means we still would have got up at 3:30 AM! Luckily, Mother Nature decided that one day of torrential downpours was enough and the rest of our trip was pretty great weather-wise. A little rain here and there but nothing Ark-worthy. And more importantly, nothing that would keep the balloons grounded!

We flew for about an hour which was really more than enough time. As we went down for the landing we all had to assume the landing position...facing away from the flying direction, grip the rope handles, and crouch. I'm not entirely certain why this was necessary...but sure whatever. Apparently either the ground didn't want us or the balloon wanted to keep going as we "landed" two or three times before it was a permanent condition...the permanency largely helped by ground crew jumping on the basket to help hold it down. After we clambered out there was cake and champagne and we all received flight certificates! We were back to our hotel by 7 AM after which we had ourselves a bit of a nap (it was going to be a full day with hiking, underground city exploration, and more!) and then, Hobbit-like, a second breakfast :)

Don't forget to find us on Google +! I'll be posting all the pictures from this trip there including those not posted on the blog!
Posted by Andrea at 12:19