The City of Anjar

I was really lucky to have a free day when I got to Beirut before I had to start working. So on Sunday I skipped Mass (and felt really guilty because the Catholic Archdiocese church is right next to my hotel) to take a tour. Through a friend's recommendation I went through Nakhal Tours which ended up being a really good deal. For $80 I got picked up and dropped back off at my hotel, had an English speaking tour guide, a nice air conditioned bus, and the tour took us to Anjar, Baalbeck, and Ksara with a stop in the afternoon for a very excellent lunch of Lebanese mezze.

Our first stop was in Anjar, which is heavily Armenian rather than Lebanese, to visit the ruins of the Umayyad city-another World Heritage Site checked off my imaginary list.

Entry to Umayyad. The main street here once housed shops which lined both sides.

Remaining colonnades along the main thoroughfare. 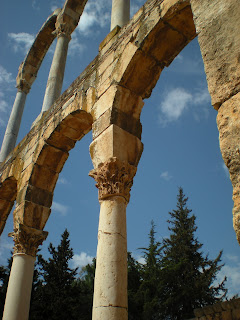 I spent a long time photographing the remains of these pillars.

Snow capped mountains in the background! It was kind of wild to see those while standing next to a palm tree.

Lebanon got it's name from an old Semitic word 'leban' meaning white. People called this the white country because of the snowy mountains. You can ski and go to the beach in the same day.

Next up on the tour-Baalbeck! Which is like Anjar but times about 12. But that's for next time.
Posted by Andrea at 05:26