With E&M back in town (at least temporarily) I have breakfasting companions again! Taking advantage of the brief window I have them we met Friday morning for breakfast at nearby Cafe Lumiere. We've all been to Cafe Lumiere before but never for breakfast so this was a new experience for all of us.

I chose Cafe Lumiere because, after checking their menu online, I saw that not only do they have the full compliment of Turkish breakfast items but they also had several Western options, including one of my favorites: Eggs Benedict. Apparently E&M were also craving a taste of home because we had three orders of coffee, fresh orange juice, and Eggs Florentine. 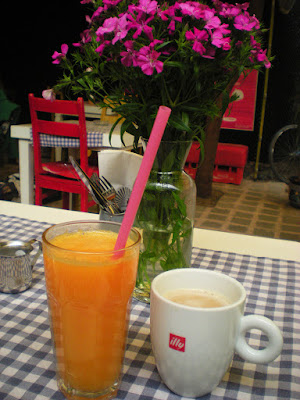 Service at Cafe Lumiere is so-so. We ordered bal kaymak to go with our eggs but it never arrived. It never made it on the bill either though so at least there's that. And apparently when you ask for filter coffee with milk on the side they take that to mean you only want half a cup of coffee. Mama needs way more caffeine that half a cup.

When the eggs came out they were served with not only spinach as is proper for Eggs Florentine but also with lettuce-which was weird. We also suspect that the bacon on the eggs-for which we had so much hope because it was all capitalized in the menu-was not really bacon. Overall it was pretty good. Not great, but pretty good. I think Nar's Eggs Benedict (including real bacon) was better but considering this place is around the corner from my apartment I can see myself visiting again when I need a hollandaise fix. 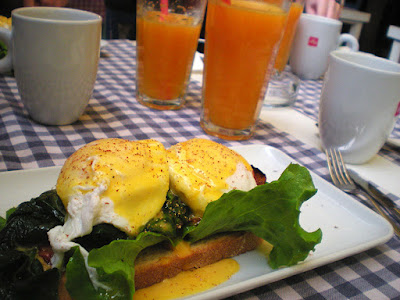 I love how many independent cafes and restaurants there are here in Istanbul. We have lost a lot of that in the States-it's just so expensive for the owners now to be independent. So Friday's questionable service aside I like Cafe Lumiere. It's a local place with a varied menu and a nice atmosphere. The inside is cozy and welcoming and they have a covered garden that's pretty relaxing.