In a feeble attempt to make moving apartments easier I stopped buying wine a while ago so when I moved into my new place my stock was fairly low. My co-worker R and I stopped at Solera on the way to my new place to start my stocking up process and as a house warming gift she bought me this bottle of Arda 2012 Cabernet Sauvignon. She'd had it before at Solera and loved it.

Arda is a family run Trakya-based winery producing boutique wines and I am adding to my 'one of these days I actually will visit Edirne and tour wineries' winery list. I've had Arda wine before and while this is the first one I'm blogging about it won't be the last. Especially given the relatively low price, at Solera at least. At Solera if you buy wine to go you get a 25% discount so this, which has a 65TL sticker price, we bought to go for only 48.75TL. 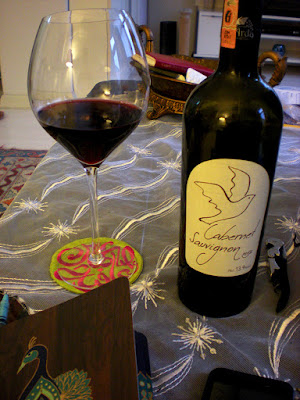 Aged for 8 months in three kinds of French oak, this cherry red Cabernet Sauvignon didn't have as much pepper in the nose as is stereotypical of this grape. Rather I got a lot of baking spice and red berries at the top with hints of tart red raspberry underneath.

In the mouth there are a fair amount of tannins initially but they drop off pretty quickly letting the berry flavors linger pleasingly. As with many red wines the more it breathed the more the flavors opened and softened making this a very nice example of a lighter-bodied Cabernet Sauvignon with dominating flavors of red berries and mint. 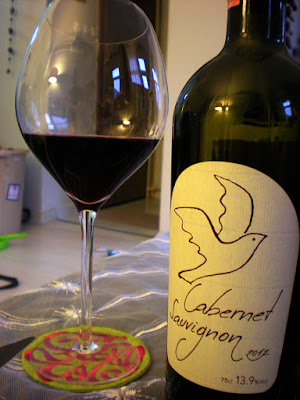 I later went back to Solera for their steak and another bottle of the Arda Cabernet Sauvignon. A) This wine goes beautifully with meat. B) Holy crap is Solera's steak magnificent. Magnificent. In a country where finding good steak is as rare as being able to get meat cooked any other way than really definitely dead, Solera's steak was cooked (or not as the case may be) to perfection, well-seasoned, and cut like a real piece of meat (as opposed to the way butchers here like to just randomly hack at a cow and give you what results).
Posted by Andrea at 12:18