Finally the guys at La Cave gave me a good recommendation! I've been burned by them a few times but I decided to try this wine because it's a new brand on the market from the Aegean and because generally I like Cabernet Sauvignon.

Before we even opened the bottle E was admonishing me for the bad influence I've had over M. In the past the two of them were of the 'wine is wine' school and when they came to Turkey wouldn't spend more than 20-25 TL per bottle. Now he's taking the tasting process seriously and coming home with bottles that cost 40 TL and up. I'm not sure if the fact that E very much loved this 75TL bottle of wine or if it's also my fault that now I'm ruining her palate for cheap wine. 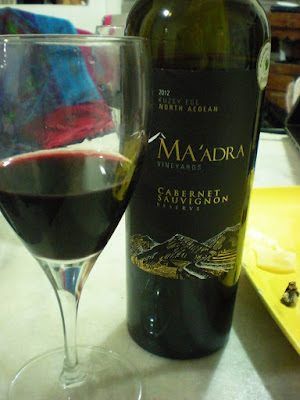 The time this Ma'adra spend in French oak was immediately obvious. The nose was full of vanilla with hints of baking spice. I was also getting a lot of black fruits like black raspberry. What I did not smell at all was green pepper which, according to the bottle, is one of the things I should have been smelling. Oddly enough though E, who usually describes wine with unhelpful adjectives like 'butterflies, fire trucks, and conga lines' did get the green pepper.

In the mouth the wine was velvety with medium tannins and acid and a nice finish. The raspberries were even more obvious to me here as were the baking spices. Basically, to me, the Ma'adra Cabernet Sauvignon smelled and tasted a little like the raspberry walnut blondie brownies I love so much. Which is really dangerous because I like to eat those for breakfast and as much as I have been tempted to have wine for breakfast before I am firmly resolved to not do any drinking until the clock is no longer in the AM.

I'm now very excited to try other wines by Ma'adra. The Cabernet Sauvignon is gorgeous and I will definitely be buying it again.
Posted by Andrea at 09:52