The problem with back log reviews is that they get really back logged! This has apparently been neglected as a draft for a rather embarrassing amount of months. And while a few wines may deserve that, the Suvla 2011 Sir is not one of them.

The 2011 Sir is a complex wine that's interesting right out of the bottle with a deep, dark red/burgundy color that did not let me down in the nose. Dark fruits, lots of berries, and depth.

And then the tannins! Oh they were beautiful. Right away on the attack the Sir acts like it lives for a good tannin the same way I do. Once I was finished swooning over the tannins I was able to pay attention to other things. Like the way the flavors burst on my tongue like a rain drop and then lingered for a nice medium finish. 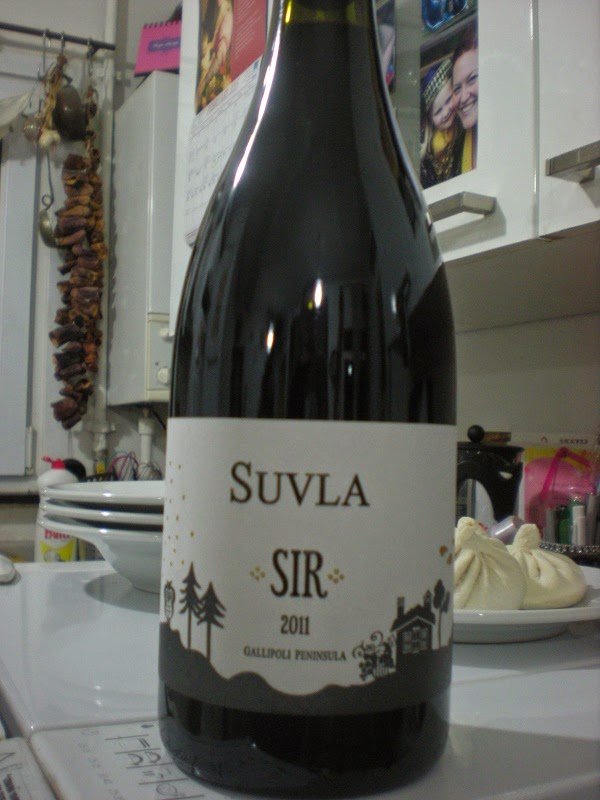 And how I picked up hints of what I think was tobacco which, combined with the fruit flavors, gives the Sir a nice balance making a truly elegant wine.

The notes I took while drinking this tell me to be poetic; that I drank the entire bottle while listening to Yo-Yo Ma, and to stop making bets with myself that I can drink entire bottles of red wine and wake up hangover free. I've lost that last one a few too many times so drunk me is obviously wiser than sober me. Although it's easier to say no once temptation is gone (or more precisely after you've drunk it all).

At 88 TL per bottle (at the Suvla Shop-there's a horrifying markup everywhere else) this isn't an everyday bottle for me but I so wish it could be. Maybe I just need to set lower goals for myself so I can justify having the Sir as a reward more often. Hurrah! I learned and used a new Turkish grammatical construction! Hurrah! I did yoga everyday for a whole week! Hurrah! I got out of bed this morning!

Seriously, can I marry into the family? I grew up on a farm, I could be semi useful in viticulture. Maybe more on the drinking the end product side but still...someone's got to do that!
Posted by Andrea at 13:31