While I was on my own I decided to take an expensive day trip to Ephesus. A quick trip to a travel agent, a monsterously early wake up, and a brief flight later and I was in Ephesus. Once a powerful Greek port and trade city, Ephesus has a fascinating history. Really, really check out the link. I've been to Rome and have seen the excavations and ruins there but this was the first real city I've had the chance to visit and I was truly awed. Ephesus is one of the seven churches mentioned in Revelations. The Gospel of Saint John was probably written here (more on that later), and it's the home of the Temple of Artemis.
Roman baths were built at some point in the city's history right at the entrance gates. Travellers and citizens were not allowed into the city until they and their clothes were thoroughly washed. 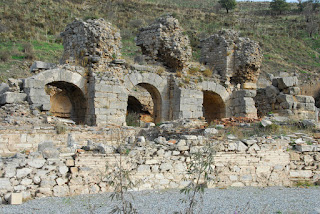 We also learned a lot about different types of columns: Doric, Ionic, and Corinthian. These are Ionic; a base with a fluted body and scrolls on top.

I could have shot myself this day. I didn't want to bring a lot with me so I just grabbed my camera with the 18-200 lens and dropped it in my bag but didn't bring the rest of my equipment with me. Then this turned out to be the first sunny day of the entire trip (including the few days in London). I was so missing the polarizer I'd left back in Istanbul.

Below is one of the city's theatres. I don't remember exactly what this one was used for except that it was for smaller gatherings that seemed to have to do mostly with music (vs. acting or combat). Speaking of combat, Ephesus apparently has the largest gladiator graveyard. That was so not on the tour.

The library as viewed from the top of the street. Ephesus's library was the second largest of it's time, smaller only than the one in Alexandria.

This was the hospital area. 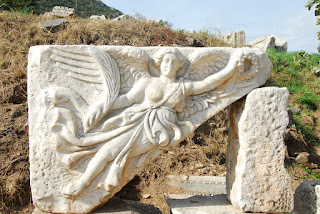 Headless statue of a doctor.

Temple of Hadrian. I believe the same Hadrian as the wall in the UK.

And the library. With assistance from Austria, Ephesus is being, not reconstructed, just...fixed up a bit shall we say? So the four statues you see on the library are not original but were made in Vienna.

This would have been the road to the harbor. I thought that was one of the most interesting things. At the height of the city's life, looking at this you would have seen the harbor and the water. However silt and changing land masses and whatever else filled it in bringing sickness to the city and making the harbor and the prosperity one brings a thing of the past. The water is now about five miles beyond what you see in the picture.

Ephesus also has a stadium. Originally built by the Greeks, the Romans added the staging when they took over. Concerts are still held here. In fact, you can rent any part of Ephesus you like for private events.