Now it may shock you to know this, but we did more during our trip than just visit mosques and such. We actually walked around the city a bit. I know, right? Now I actually have no idea what half of these things are, but I liked them so I took pictures.

Kitties! There were cats everywhere in the city. For the most part they looked well-fed and groomed and were friendly. Of course they hung out a lot at restaurants...and I may have tried to feed scraps to some of them (much to waiters' annoyance). There were a couple lovely kitties at the Top Deck Cafe where I hung out smoking nargile. One afternoon I was reading on the benches in front of the Blue Mosque and an orange tabby jumped up on the bench then plopped himself on my lap, wiggled around a little, got up and started rolling around on my bag, then hopped off and moved on.

And the markets; the Grand Bazaar was really something. Even with a map we mostly just walked around in a lot of circles. However, if you ever visit Istanbul you really need to check out the Grand Bazaar...but don't buy anything! We deliberately did not buy things the first two days because we were waiting for the bazaar...but the longer I was in Istanbul the more shops I found with cheaper marked prices. And cheaper marked prices means that you can bargain them down even more.

I really liked the Spice Market though and the prices there were actually pretty decent. And it didn't have just spices but sweets and all sorts of other goods.

Evil eyes were naturally everywhere. Contrary to what it sounds like, an evil eye is actually a kind of good luck charm. Said to be the eye of Medusa, the Gorgon who could turn living things to stone with just a look, the evil eye wards off bad luck, spells, and other such. They come on jewelry, key chains, hangings, phone charms...everything.

One of the most common sweets in Istanbul are Turkish Delights. Turkish delights are a gummy-ish kind of sweet, usually cut into small squares and coated with powdered suagr, coconut, or seasame seeds. A lot of times there are nuts in the center (a lot of hazelnuts) and come in so many flavors: chocolate, walnut, pistachio, rose water (eeewww), and things that I don't have names for. I brought back a big box for my mom since I couldn't really explain to her what they were. I don't think she really fancied them though. I do have to say that I liked the delights from Sarajevo better than the ones here.

Spices...the smell of the market was incredible. I was pretty tempted to buy a little of everything.

Bellydance costumes were everywhere too.

Dried fruits and vegetables. Mostly I couldn't identify things and was left wondering why you'd want to have dried aubergines? 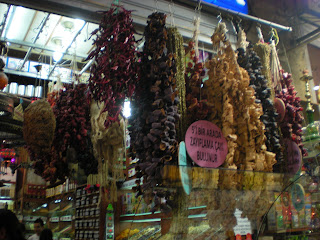 I loved the tea sets and had to restrain myself. A friend bought me a set on one of my visits to Kosovo but of course I wanted one of the rediculously ornate sets here. But really I hardly need two Turkish tea sets. 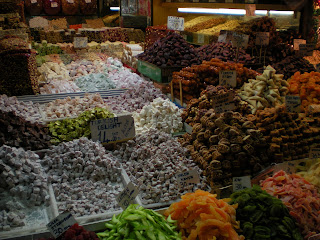 And more evil eyes and Turkish coffee pots. I love Turkish coffee. It's made differently than any other kind of coffee. First you have to grind the beans to a powder. Then you put the powdered coffee in the pot (with lots of sugar if you're me) then fill the pot about 3/4 with cold water. Boil the coffee, let it settle, then boil it again and pour. After you pour it (little cups) you have to give it a couple minutes to settle, otherwise you're drinking sludge. Ugh, just thinking about that makes me shudder. I love visiting my friends in Pristina for many reasons but one of them is because they make Turkish coffee in the office at least four to five times a day! 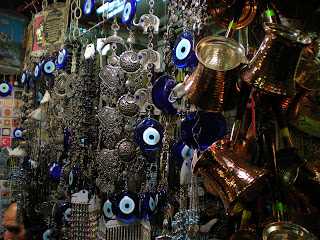 Candle holders and lamps decorated with colored glass were also abundant. Had to stop myself from buying lots of these as well. There were suitcase weight restrictions after all. 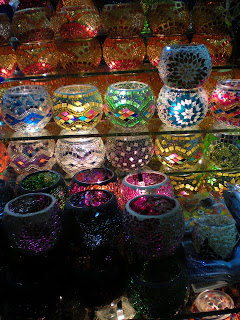 And of course random textiles.

This was a side street off the Blue Mosque. I think these were restaurants but I just loved the colors.

A fountain outside the Topkapi Palace. Fountain in the traditional sense that it was once a spot for collecting water.

The (decorative) fountain in front of the Blue Mosque. 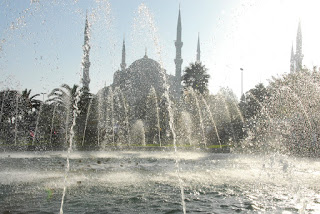 Just a little outside Taksim, a short walk from the end of the tram was the Dolmabahce Palace. This was the first, and I believe only, western style palace built by the Ottoman Empire. Photographs were not allowed inside and we had to wear booties over our shoes.

Believe it or not, this gate actually leads out to the Bosphoros but it was so foggy that day that you can't see anything on the other side. And speaking of the Bosphoros...did you know it has jellyfish?! We were sitting in a cafe along the shore and I noticed what I thought was some rubbish, a plastic bag or something, floating in the water. Then I looked again and realized that the plastic bag seemed to be moving with purpose. And suddenly all I could see below the water was jellyfish. They were everywhere! There were big ones and wee little baby ones. Unfortunately I couldn't get a picture. They were practically clear and coupled with all the moving... 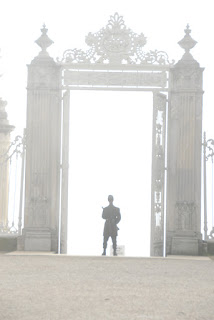 There were also peacocks wandering around. I love peacocks. 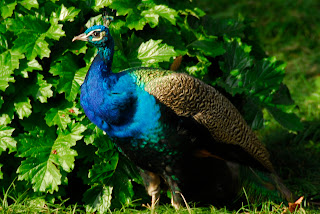 One afternoon I ran across a graveyard and decided to stop in. I absolutely love cemetaries. I think they really are a reflection of society. I especially love cemetaries that are different from the ones I usually see, and you really cannot get much different than an Islamic cemetary. Unfortunately I don't know anything about their burial rites but I may have to look it up...to find out why they use above ground tombs, and why these cylindrical headstones? 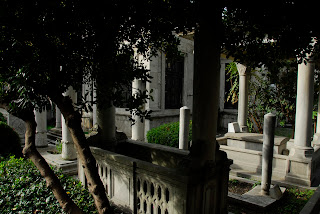 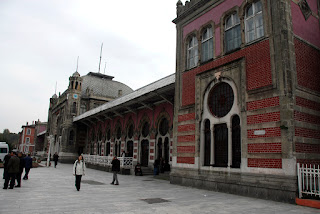 One day in an attempt to both find a short cut but also avoid a couple people I ducked into a gate that I thought would lead to the Topkapi Palace. Eventually it did but first it brought me to Gulhane Park where I discovered this charming fountain.

Tried my hand at some night photography. This is the Hagia Sofia by night.

The fountian in front of the Blue Mosque turned into a bit of a light show at night changing color to purple, red, yellow, blue, and green. 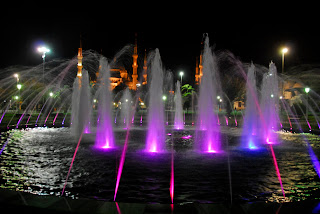 This is a view of Taksim and Galata Tower. I wasn't as in love with Taksim. It was so crowded and full of all the same expensive shops I can't afford anywhere else. Also, there were a lot of stairs to reach the tower. 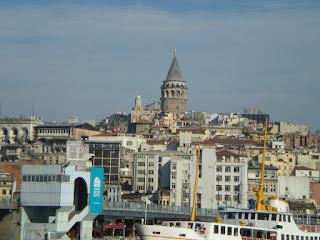 I took one of the water ferries to the Asian side of Istanbul. Maybe it was all the construction but I wasn't wowed by the Asian side. I did however, love love love the water ferries. I don't particularly like swimming or being in water, but I sure like being on it. This is a view of the Dolmabahce Palace from the water. You can kind of see where that fogged over gate would be right out front. 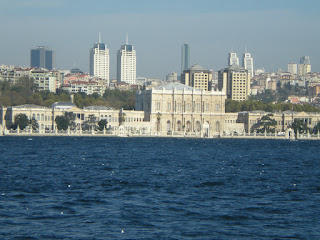 Fun stalls and restaurants along the water front. I had the most delicious donut-like things here. 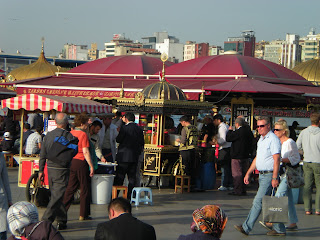 So pretty much I loved Istanbul. Some of the city was not what I was expecting...it was just so city. And city in kind of that ugly Soviet way. While I realize that of course millions of people live here I guess I was expecting something more romantic. Airy stone buildings with clever arches and walkways...I may not really have got that but what I did get was a sense of a city both frenetic and orderly, friendly, a little foreign and yet familiar, and a place I where I could happily live. Sigh...I so should have stayed.
Posted by Andrea at 08:00